This is absolutely brilliant.
Posted by Otto Man at Tuesday, December 23, 2008 2 comments:

Alright, not really. But this is a helluva good spoof.

Flight of the Conchords

For some reason, they've released the first episode of the new season of "Flight of the Conchords" a month early. Enjoy.

I've only now discovered this. If you haven't seen it, I recommend starting with the entry for Rudy Guiliani.
Posted by Otto Man at Sunday, December 14, 2008 1 comment:

"I Mean, Who Throws a Shoe? Honestly!"

Economy got you down? Worried about the Fantasy Football Playoffs? Whatever is worrying you won't seem so bad after you get a load of this.

If you haven't read Joseph Stiglitz's piece on the economic meltdown in Vanity Fair, you should.

It's short, sweet and smart. Just like Herve Villéchaize!
Posted by Otto Man at Friday, December 12, 2008 No comments:

Outstanding interview between Jon Stewart and Mike Huckabee. It's sad that the most informative interviews in the media today come from a satirical show on Comedy Central, but I'll take what I can get. Enjoy.
Posted by Otto Man at Wednesday, December 10, 2008 3 comments:

So I'm at a big Thanksgiving gathering which comprised a number of families. I'm talking to someone I haven't seen in a few years (his parents and my parents are best buddies). The usual small talk ensues and he mentions that he's currently living in Durham. I say "I've heard it's a nice place, but unfortunately it's filled with Dookies."

He goes on talking about Durham and about how he lives downtown and for some reason starts talking about the urban center and demographic shifts and things like that. My kid starts crying and I excuse myself.

Some things about our brief conversation continued to bother me. After my anti-Duke comment there was a slight hesitation, a glance over my shoulder -- all of this is very subtle and hard to quantify, but it just felt weird. I know he didn't go to Duke - I thought that perhaps one of his friends went there and that might be the reason for the strangeness that descended.

If anyone knows of an e-card along the lines of "You know that incredibly racist thing that you thought I said? Well, I didn't say it" Please pass it along.
Posted by InanimateCarbonRod at Monday, December 08, 2008 7 comments:

And yes, I could spend a week on Hulu just watching the clips from this show. If you've never had the pleasure, here's an episode that's a personal favorite.
Posted by Otto Man at Saturday, December 06, 2008 No comments:

To Alcohol! The Cause of, and Solution to, All of Life's Problems!

Holy Taco has a nice top ten list of beer slogans. Normally, I wind up disagreeing with the top choices in these lists -- and yes, I do have a lot of free time, thanks -- but I defy anyone to challenge their top two picks.
Posted by Otto Man at Friday, December 05, 2008 5 comments:

An all-star, three-minute musical comedy parody on the California gay marriage referendum. You know, the usual.

In short, McCain entered this election season being the worst thing that anyone can be, in the eyes of the Rove-school Republicans: Different. Independent. His own man. He exited the campaign on his knees, all his dignity gone, having handed the White House to the hated liberals after spending the last months of the race with numb-nuts Sarah Palin on his arm and Karl Rove's cock in his mouth. Even if you wanted to vote for him, you didn't know who you were voting for. The old McCain? The new McCain? Neither? Both?

Nixon: Now Newer Than Ever!

If you haven't sampled the latest releases in the Nixon tapes, take a look.

Here's one of my favorites, showing how Republicans have historically rejected identity politics and been a friend of African Americans at the same time: 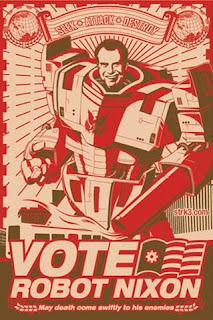 [...] Nixon: Well if you’ve got a candidate, what we need there… Godammit Chuck, we haven’t got an Italian yet. I can’t find any…

Colson: Did Bob mention the [foreign adviser John] Scali idea to you? …Could be at the U.N.

Nixon: Instead of the black?

Colson: Instead of the black. Who the hell cares about the blacks? Scali would love the U.N. That would give you an Italian in the cabinet. At least it’s a thought. And he’s a legitimate Italian. A good Italian…

Nixon: You know, basically, we don’t owe the blacks a damn thing anyway.

Colson: Oh hell, no. As a matter of fact, I think it’s a bad signal to put a black in the Cabinet… The people that voted for us– (Laughs)

Nixon: …And after all, this pampering of blacks isn’t a good idea. I think you’ve got a good point there…

Colson: If we appoint a black in the cabinet in the second term and we didn’t have one in the first term, people are going to say, “My God, they’re moving–

Awesome. To quote Bill Hicks' comment about "COPS," it's like a sore tooth I can't stop touching!
Posted by Otto Man at Thursday, December 04, 2008 No comments: