As much as Jesse Jackson opening his mouth has made me cringe lately (Michael Jackson, Terri Schavo), he is probably right that this is offensive.

And just like the American Way to capitalize!! Check our friends at e-Bay
Posted by Studiodave at Thursday, June 30, 2005 1 comment:

I thought this was fishy.
Posted by InanimateCarbonRod at Thursday, June 30, 2005 1 comment:

Via boingboing, we have this lovely display of WWII propaganda posters. The Greatest Generation wasn't always all that great.
Posted by InanimateCarbonRod at Thursday, June 30, 2005 No comments:

A new campaign is underway to fight underage drinking. It includes a public service announcement with results of a recent survey which asks kids where they are getting booze.

"We were astounded when we found that 65 percent of youth reported that they obtained beverage alcohol from friends or family," said Dand Fudurich with the Century Council. "This meaning they got it from their parents, their friend's parents, older siblings, family members or older friends with or without permission."
Link


Why was the fact that teenagers get booze from older friends so astonishing? What's shocking to me is 35 percent of teens do not get alcohol from either friends or family. Where can these people get it from? Kids these days must have some really good fake IDs or something.
Posted by InanimateCarbonRod at Thursday, June 30, 2005 1 comment:

In a recent appearance on CNN, Representative Robin Hayes (R-Bizarro World) insisted that there was a rock-solid solid connection between Saddam Hussein and the attacks of September 11th. Sure, such claims have been thoroughly dismissed by the 9-11 Commission, CIA officials, counterterrorism experts, a couple Secretaries of State, and even a fella by the name of George W. Bush. But Rep. Hayes knows better. Reminded that the 9-11 Commission had explicitly ruled this out, Hayes huffed, "Legislators have access to evidence others do not." Apparently, legislators have access to primo drugs, too.

Combined with the president's speech last night, which unveiled "Operation: Clap Harder," it seems that we finally do have an exit strategy for Iraq -- second star on the right, and on 'til dawn!

True that. Biggie Smalls had it right!

Unfortunately, apparently Congress is more of a West Coast Hip Hop crowd (Snoop Dogg, Ice Cube) and hasn't learn from my man, the Notorious BIG. See below from some cracker newspaper...

What the good Congressman is neglecting it that times are tough and if you're not looking out for yourself, who will? Besides, how you gonna pay for your Country Club dues with a measly $162,100 a year?

Seriously, I wish my job awarded pay raises for arguing with my coworkers and not accomplishing anything - while we're at war.

Word up.
Posted by Studiodave at Wednesday, June 29, 2005 No comments:

Cry Me a Money River

I’m not quite sure where to begin with this, but…

Here’s the thing, the credit fraud problem EXISTS because you have the right to earn money. There are 3 major credit companies who grade consumers on how good or bad a credit risk they are. Equifax is one.

Now credit would be much of a one making enterprise if every company out there wasn’t hell bent to get you to spend as much money as possible. Even beyond what you should. So they have profited off this consumption monster in the American buyer and now that criminals are getting more astute as beating the system – they are taking the “higher ground” that “we are a corporation, not a charity.” All companies have to make certain allowances to keep their product safe – think of car companies with seat belts and air bags.

Amazingly, the biggest thing this CEO is missing that that they have a whole new opportunity for MORE MONEY. Try to follow me: you GIVE AWAY the annual free credit check, THEN you sell (1) fraud insurance and (2) a monitoring service that alerts you to any new or odd activity.

This is nothing more than state mandated advertising. You should be smarter than to complain about it.
Posted by Studiodave at Wednesday, June 29, 2005 No comments:

What the RIAA doesn’t have an answer for…

When Napster came under attack from the recording industry, the impact to the peer to peer user base was that they disbursed to multiple different Napster-esque application. Instead of learning about the piracy problem and working with software designers to figure out a solution, the corporate lawyers thought they could scare everyone into submission.

Unfortunately, these types of internet users (a) don’t scare easily, (2) are smart, and (3) don’t appreciate big business complaining they don’t have enough money.

With today’s Supreme Court ruling, makers of software with the intention of peer to peer file sharing can be held liable for the actions of their end users. Yet again, the recording industry has smashed any kind of formal structure they could work with.


All during this time – even before Napster, NNTP (aka newsgroups) has been quietly growing and evolving. Newsgroups predate even the internet. It is the original file sharing system, and, no, it wasn’t designed to share music files. Heck, CD’s for music wasn’t even invented then.

So, newsgroups can’t be caught with the intended purpose issue.

I’m sure the RIAA is hard at work to figure this one out.

But as sure as night follows day, the hackers will work to foil the RIAA efforts, the RIAA lawyers will battle back.

One day the artists will realize that with the internet, they don’t need the recording industry’s resources for distribution.

Come on, Jay-Z. You’ve mastered the rap word. Now, revolutionize the music world. Just the artist and the listener.

PS – I have never downloaded a file illegally. I will tell you that this excuse that record industry revenues are down because of P to P networks is bogus. The recording industry has tried to apply big business tactics to the creative process. And that will never work in the long run.
Posted by Studiodave at Monday, June 27, 2005 1 comment:

This is particularly impressive given 90% of the customers are potentially breaking the law (if they are playing in the US).

The Justice Department is not about to being interpreting the laws in a more accepting manner - so how about a more American (capitalistic) approach?

Think about this -- The biggest reason the law enforcement officials explain in continuing the fight over internet gambling is that since gambling institutions have (historically) had shady dealings with the underworld in money laundering - they can be manipulated by terrorists to move money around to support their actions.

Why not legislate that the payment processing servers must be managed in the US with revenue roughly equal to the local sales taxes paid out as some kind of "processing fee?"

We couldn't call it "sales tax" because all internet commerce would be covered and, as someone working in that space can tell you, it's not ready for that additional financial burden.

We tax alcohol and tobacco more heavily as a vice tax, why not gambling? So with 8% of $1 billion, maybe people could feel more comfortable capitalizing on something that's not going away any time soon...
Posted by Studiodave at Sunday, June 26, 2005 No comments:

There is a scene from "Shawshank Redemption" where Tim Robbin's character asks the warden, "How can you be so obtuse?" To which the warden angrily banishes Robbins to several days of solitary confinement. That's an honest, realistic event.

Yesterday, on the "Today" show, America's favorite whipping boy, Tom Cruise, went off the standard promotional script ("Oh, Mr. X is great to work with, always cracking us up on the set.") and got in to a substantive debate with Matt "How's my hair"Laurer.

The pros and cons of drugs, therapy, and Scientology are for other posts - but let's sit back and enjoy the fact that a major motion picture actor called a major media mouthpiece "GLIB" - and Matt took it smiling.

For those of us who only studied vocabulary for the SAT's here's the dictionary definition
1: marked by lack of intellectual depth; "glib generalizations"; "a glib response to a complex question"
2: having only superficial plausibility; "glib promises"; "a slick commercial"
3: artfully persuasive in speech; "a glib tongue"; "a smooth-tongued hypocrite."

Mr. Cruise, thanks for turning on the media which is conveniently turning on you.

News media, take note. Just following the pack and staying on message, you may look pretty in the short term - but when someone finally stands up to you, you will loose all credibility. And that won't come back easily.

Honesty can be very refreshing....
Posted by Studiodave at Saturday, June 25, 2005 3 comments:

Welcome back common sense to the GOP

If you are a middle of the road voter who misses the Goldwater GOP days, this article "Onward Moderate Christian Soldiers" by retired Senator Danforth (R-MO) was a breath of fresh air.

If you are a Christian who looks to the Bible, not as a literal stenographer's record from the Big Guy, but as a source of Judeo / Christian wisdom and support, it is a sign that common sense may not be dead in politics ... yet.

Marx and Krugman - in understanding Iraq

In reading today's op ed piece in the NYT's "The War President," Krugman raises some completely valid points. These points should be clear to anyone who can fog a mirror and recognizes that the world is not black and white.

What I haven't seen in the popular media is the recognition that all these events are set to the backdrop of an exit from the Vietnam war without honor. Essentially, Marx's pendulum of history has swung from the civil chaos of the late 60's to a fear of the mere questioning of public policy.

It doesn't help that a lot of "armchair historians" and "military strategorists" cling to the notion that as long as we stick together all will be well. General Custer taught us that sticking together isn't enough.

On the far left, the isolationists don't help the healing by evoking policies of immediate withdrawal which fail to recognize that the modern world is permanently interconnected and bound by trade, telecommunications, and the internet.

So how does the pendulum move to the middle -- or at least stop swinging to violently to the left and right?

Somehow we need to have some kind of public therapy session to exorcise the demons of the past - abandonment, betrayal, greed -- and rationalize them with the goals of the future - democracy, equality, freedom self expression.

By incorporating a better view on historical perspective, hopefully we can come to terms with the past and feel more comfortable with ourselves in the present. 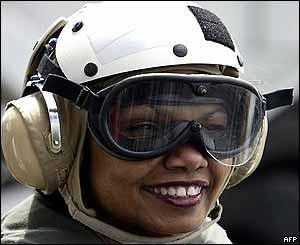 Here's Condi in my favorite photo op of all time. Fashion Forward? Mission Accomplished!!
Posted by Studiodave at Friday, June 24, 2005 No comments: