Hurricane Sarah has finally struck the city of St. Paul, and the one-day devastation was phenomenal. 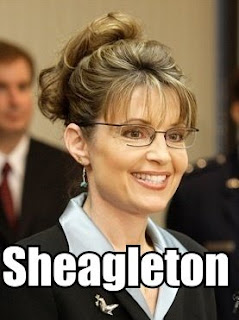 Greg Sargent at TPM has a convenient rundown of today's aftermath, so I'll just shamelessly repost the entire damn thing:

On the same day that the Republicans were forced to dramatically cut back their convention activities, the Palin Meltdown unfolded with extraordinary speed. It's worth pondering the totality of what happened today, in a mere half day...

* The news that Palin once backed the Bridge to Nowhere went national.

* It emerged that Palin has links to the bizarro Alaska Independence Party, which harbors the goal of seceding from the union that McCain and Palin seek to lead.

* The news broke that as governor, Palin relied on an earmark system she now opposes. Taken along with the Bridge to Nowhere stuff, this threatens to undercut her reformist image, something that was key to her selection as McCain's Veep candidate.

* The news broke that Palin's 17-year-old daughter became pregnant out of wedlock at a time when the conservative base had finally started rallying behind McCain's candidacy.

* Barely moments after McCain advisers put out word that McCain had known of Bristol Palin's pregnancy, the Anchorage Daily News revealed that Palin's own spokesperson hadn't known about it only two days ago.

* A senior McCain adviser at the Republican convention was forced into the rather embarrassing position of arguing that McCain had known about the pregnancy "last week" -- without saying what day last week he knew about it.

* It came out that Republican lawyers are up in Alaska vetting Palin -- now, more than 72 hours after it was announced that she'd been picked.

* Palin lawyered up in relation to the trooper-gate probe in Alaska -- a move that ensures far more serious attention to the story from the major news orgs.

Wow. Quite a day. (Click through to the original article for the links to full stories on each.)

As brutal as this list is, it still doesn't everything tragically ludicrous that went down with Palin today. For instance, her complete, nearly comical ignorance on the Pledge of Allegiance also came out in the media today. And just now on CNN, Campbell Brown ripped McCain functionary and apparent assclown Tucker Bounds a new asshole over the tired argument that Palin has national security experience because she's the head of the Alaska National Guard. (Seriously, watch that if you haven't. Brutal.)

I've never really professed to understand the deep inner workings of the Republican mind, but I have to think that not even an acclaimed genius like Turdblossom would have wanted the dead pool on the career of the newly minted Vice Presidential candidate to begin less than 72 hours after the announcement and on the very first day of the Republican National Convention.

Yeah, it's really hard to believe she's not polling well in focus groups.

(I can't remember where I saw the "Sheagleton" reference first, but it's brilliant. If you're not a complete politics nerd and don't get the somewhat obscure reference, read up on this historic moment that's apparently coming back for seconds.)
Posted by Otto Man at Monday, September 01, 2008

I love that the local Alaskan news is all over this including coverage on a "tip" hotline...

The local television news in Anchorage -- a midsize city of 270,000, roughly the size of Lexington, Kentucky -- has been able to catch the governor and her staff in lies over Troopergate and expose a few other scandals.

As we all know, local television news in small markets like that can barely handle sports and weather, much less actual investigative journalism. (Hell, even here in New York, I believe the investigative journalism in our local news consists of an elderly Hispanic guy in a menacing black leather jacket confronting shady landlords. Oooooooohhhh.)

But if Kent Brockman and company have already been able to dig up this much dirt on Palin, then just what else is going to be found when the A-list journalists land in town and start digging through her garbage? The local Republicans all hate her, so it's not like anyone there is going to be covering for her.

Start the death watch for Sheagleton.

It's perfect. Apparently, her qualifications begin and end with not having an abortion. Congratulations!

If you want to keep it a secret don't put your pregnant daughter on stage - or maybe don't even accept the nomination if it is that important to your family. Most bloggers jumped on the fact that she was hiding something - shot - and missed, but not by too much.

Sarah Palin had the choice to keep her family life private and the media would mostly oblige - The Bush daughters for example have gotten a free pass for all but actual run ins with the law. She instead made her family a public family as her first act in the national spotlight and then the McCain camp acted shocked that they were then public figures.

Bristol's pregnancy should not be fodder for news stories, it should not be used to judge Sarah Palin's "family values" credentials (although her anti sex ed stance does provide some comic relief here). All this does speak to her naivete though, and amplifies the notion that she is just not a ready for prime time player.

Morning Jo(k)e on MSNBC was even spinning it to the mainstream media, making it sound like the NYTimes was responsible for all this. Pfft.

Holy crap, I was just talking about Eagleton today, before reading this post.

Since I didn't know my Eagleton history, my friend pointed out that he was McGovern's 8th pick for VP. I have assumed all along that other, qualified Republican women shot McCain down.

I have assumed all along that other, qualified Republican women shot McCain down.

At this rate, I'm pretty sure he just worked his way across the country, east to west, and Palin was the first even remotely plausible candidate to say yes.

If she'd passed, it would've gone to a Republican city councilman from Honolulu.

I'm waiting for the pics of her posing naked to pay her way through poli-sci to finally appear in the Star or National Enquirer. That would just about top off the sophistication level of this Annabel. Sorry, but just because your teen is pregnant and lots of other teens get pregnant doesn't make your teen getting pregnant OK. You are just a blind, incompetent, and unattentive parent if your teen gets PREGNANT. I doubt Putin's teen is pregnant, or Gordon Brown's (though I could be wrong about Gordon). All I know is that mine is NOT and won't be because she knows it's a bad idea and I actually listen and talk to her about her anxieties, because I'm her parent first and governor of ... whatever 2nd. I think I'm still in the majority. Even if my daughter got pregnant, I wouldn't see it as a virtue that Sarah Palin's teen is also expecting. That would just make both of us failures as parents. And having 5 kids is not an achievement, sorry. It's actually rather easy. But it's also 5x the responsibiity of having one child, and you better be up to it... SP is just a stupid, desperate, and cynical choice for VP picked to appeal to the mindless who will vote Republican anyway, so what was the point? I'll say one more thing. Alaska is about 49th on the scale of important states of the union (ahead of that island in the middle of the ocean there). Any serious attempt by this ice queen to put a reform agenda through Washington will be dealt with savagely; thus she will fall in line with the tenor of today's (Republican) Washington just fine, and it will be another four years of the last eight, that is if America can't get its courage back and do the right thing and give the Democratic glimmer twins their rightful place in history and finally repair the injustice of inconvenient Al's stolen election.