Hullo? Anybody still there? What’s wrong with you, man? Well, if you bothered to show up, the least I can do is Simpsonify your Friday, in a somewhat random fashion. To the Bee Mobile!

1. The Simpsons’ 138th Episode Spectacular. Probably the best clip show of any show ever, considering it was hosted by Troy McClure and featured several unaired clips. One of the deleted scenes was Krusty trying to get a spot on a hemorrhoid infomercial: “How about one of the "after" guys? Aah. Ohh, that's better. I can ride a bike again!” I use that line all the time. 8/10

2. Skinner’s Sense of Snow. Craptacular Christmas episode from 2000. A freak blizzard hits Springfield, trapping some kids along with Skinner and Willy at the school. Homer and Ned set out to rescue the kids, but in pretty much the only funny part of the show, they hit a fire hydrant and become completely encased in ice (“Stupid ice! I knew I’d die encased in something.”). They then start to hallucinate on the carbon monoxide fumes entering the car. 4/10

3. Faith Off. The chalkboard says “I will stop phoning it in,” which really feels like what they did for this episode. Bart becomes a faith healer (and sings an awful, awful song), and Homer kinda sorta goes back to hang with the nerds from the University. Boo. 2/10

4. Marge Simpson In “Screaming Yellow Honkers.” Another 10th season clunker. Marge gets a Canyonero SUV, becomes a road rager, etc. But man do I love that Canyonero. At least I love the commercial for it, which was in a different episode. 3/10


5. The Homer They Fall. Here we go. Homer discovers his thick skull prevents him from being able to be knocked out. Turn out Moe used to be a boxer (“They used to call me Kid Georgeous. 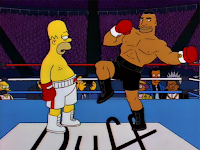 Then they called me Kid Presentable. Then Kid Gruesome. Finally, Kid Moe”), and he convinces Homer to become a boxer (“Homer, of all the crazy ideas you've had, this one ranks somewhere in the middle.”). Lots of great Moe stuff here, way way better than the episode where he gets a face lift. 7/10

6. Homer Simpson, This is Your Wife. Wow, it took all the way til no. 6 before we got an episode I haven’t seen. N/A

7. Treehouse of Horror XVIII. Another no-see. I didn’t even know roman numerals went that high. N/A

8. Treehouse of Horror III. Perhaps the best ToH ever, and that’s with me mostly not caring for the second story. First story: A take-off on a Twilight Zone episode in which a doll comes to life with the aim of killing the guy who bought it, Homer buys a Krusty doll for Bart and, well, you get it. So many good lines. We’ve got “It comes with a free frogurt!”, “My baloney has a first name, it’s H-O-M-E-R,” and Patty’s 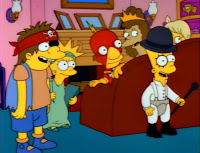 illuminating line, “There goes the last thread of my heterosexuality.” Second story: King Kong, with Homer as the ape and Marge as the lady whose name I always forget. Kinda dumb, kinda lame, not many good lines. Third story: Definitely the best ToH segment ever. Bart finds a book in the Occult section of the public library and tries to bring back Snowball I, but instead he brings back all the town’s dead as zombies. “Is this the end of zombie Shakespeare?” “Dad, you killed zombie Flanders!”/”That was a zombie?” 10/10

9. The President Wore Pearls. I thought this one was going to be the one where we see into the future, and Lisa is the president and Bart is her Billy Carter-esque brother. I was wrong. N/A

10. The Principal and the Pauper. Well, at least I seen it. Turns out that Skinner’s an impostor; the real Skinner was supposedly blown up in Vietnam, and our man (real name Armin Tamzarian) took up his identity. As is often the case with the 8 through now seasons, there are lots of little bright spots, but just not enough to string it all together. One of the good moments is Skinner/Tamzarian’s new job, trying to get guys to go in to see a nudie show: “Oh, yes. Oh, yes. Capital City's nakedest ladies. They're not even wearing a smile. Nod suggestively. Yes, six, count 'em, six gorgeous ladies just dying...for your leers and cat calls. Yowsa, yowsa.” 4/10

That’s what we got. Feel free to tell me in the comments how much you agree with me about ToH 3. You got a better choice?
Posted by Thrillhous at Friday, August 10, 2007

1. "You're probably saying, 'But Troy! I've seen every Simpsons episode ever aired? What could you possibly show me that's new?' ... Well, you've got some nerve, mister!"

3. God, I hated this episode with a passion.

8. "The frogurt is also cursed." And yes, I use the Zombie Shakespeare line a lot.

10. The saddest thing about this episode is that Martin Sheen voices the "real" Skinner, in a tragic waste.

You forgot to heed the final warning in #10: No one will ever speak of it again, under penalty of...TORTURE!

And my favorite ToH is the one (I'm not sure which Roman numeral to assign it) where Lisa's tooth. Another bit in that ToH was the one where Kang and Kodos run for president, and has probably my most used line: "Don't blame me, I voted for Kodos".

That TOH features a naked Bob Dole promising to tear the aliens a new cornhole. Priceless.

Finally! An episode on the Simpsons math site!

I'm probably in the minority on this one, but my favourite ToH is the very first one. The Simpsons move into a haunted house voiced by James Earl Jones, The Simpsons meet Kang & Kodos for the first time ("How To Cook For Forty Humans"!), and The Raven. ToH 3 is my second favourite but this one's at the top for me.