I'm obviously a little biased in this, but I have to say the Democratic convention is going pretty damn well so far. 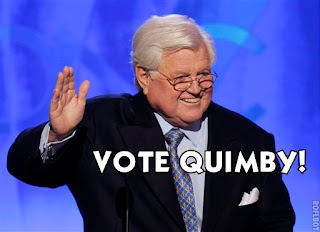 The first night started out a bit thin, featuring the Nancy Pelosi animatronic robot from the Disneyland Hall of Presidents. But then Ted Kennedy made a terrific stump speech, and then Michelle Obama absolutely knocked it out of the park. (Seriously, if you missed the speech, be sure to watch it.)

I know Mark Warner was technically the keynote speaker, but Tuesday night was all about Hillary Clinton's address. Not just because of the media narrative, but because Warner decided to cell-phone it in with a shitty, shitty talk. Anyway, Clinton nailed it. Say what you will about some of the divisiveness of the primary season, but she couldn't have done a better job. (I know, the media thinks she could have done better. The media, of course, are idiots.)

Last night was the most raucous yet. Bill Clinton dropped the hammer and, judging by the three-hour standing ovation from the crowd, all has been forgiven. And Joe Biden closed things down with a solid turn in the VP spot.

The best speech of the night, though, came from an unlikely source -- John Kerry. You likely missed it, since the cable networks were too busy interviewing random people on the floor (CNN) and having Tom Brokaw lecture us on how no one can criticize John McCain Because He Was Once a POW™ (MSNBC). I guess they assumed that no one interested in the presidential election convention of Democratic Party would ever want to hear from the last presidential nominee of the Democratic Party. But, damn, Kerry was on fire. Wooden delivery, but terrific zingers. Take a look if you missed it.

What'd you think? High points? Low points? Should that godawful band be shot, or simply beaten?
Posted by Otto Man at Thursday, August 28, 2008

Kerry's speech, once I found it where the MSM idiots weren't otherwise interviewing people on the floor in an attempt to prove that there is still disunity in the Dem party over the top of it, was fantastic! I love the Senator McCain - Candidate McCain dichotomy. But here's the deal: the MSM talked over it and cut to commercial. They gave it NO PLAY. Conspiracy? Could be...because that's the speech that should be played, in snippets, over and over and over again.

Biden's speech was the weakest so far, and it was still great from his "plain Joe" perspective. He does the mom-and-apple-pie bit really well.

I now nervously await Obama's speech tonight. Will it be as good as his 04 speech? Better?

I thought Bill's speech was pretty boring but then I saw Hillary and realized she had stolen his MOJO. Hard to figure out which speech the press was watching because I thought it was amazing.

Loved watching Kucinich run full speed towards the deep end and then leap over so there was no mistake just how nuts he can be.

I thought Biden was pretty good actually. He came off as smart but not elitist, informed but not a policy wonk, you get the idea. It is the whole french cuff wearing guy from Scranton thing that only he can seem to pull off.

As for the band question I don't think your options are mutually exclusive.

It is the whole french cuff wearing guy from Scranton thing that only he can seem to pull off.

That pretty much nails Biden.

Yeah, everyone was expecting attack dog, but the standout point was the genuine empathy for people in economic crisis.

Just read a rumor that McCain might pick Palin. If he has the guts to pull that off I think the dems will be scrambling. A gun-toting, moose burger eatin, hardcore conservative, with great camera presence, the looks of a beauty pageant contestant (because she was - runner up Alaska I think) and then the fact that it would be the republicans - not the dems who are breaking the glass ceiling for women this year.

Dems couldn't touch her lack of experience because she has been a governor and has as much political experience as Obama.

Not to mention the fact that by pulling the trigger on such an unconventional pick the press will go gaga over what a "maverick" he is - just like the "old McCain".

Conservatives will lurve her, and women (from right to left) will be dialed in wanting to love her.