Ed.: An old one, reposted to honor the meaning of Independence Day 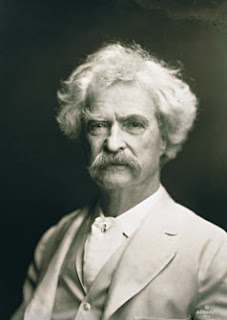 Mark Twain is, without contest, my favorite author of all time.

More than any writer before or since, Twain somehow managed to combine excellent story-telling, first-class sarcasm, and biting social commentary in a nice tight package. I've always loved him for the first two traits, but the more and more this country comes under the sway of the Banana Republicans, I'm really appreciating his clear-eyed take on patriotism and democracy.

For instance, take this passage from The Papers of the Adams Family:

Against our traditions we are now entering upon an unjust and trivial war, a war against a helpless people, and for a base object — robbery. At first our citizens spoke out against this thing, by an impulse natural to their training. Today they have turned, and their voice is the other way.

What caused the change? Merely a politician's trick — a high-sounding phrase, a blood-stirring phrase which turned their uncritical heads: Our Country, right or wrong! An empty phrase, a silly phrase. It was shouted by every newspaper, it was thundered from the pulpit, the Superintendent of Public Instruction placarded it in every schoolhouse in the land, the War Department inscribed it upon the flag.

And every man who failed to shout it or who was silent, was proclaimed a traitor — none but those others were patriots. To be a patriot, one had to say, and keep on saying, "Our Country, right or wrong," and urge on the little war. Have you not perceived that that phrase is an insult to the nation?

In a monarchy, the king and his family are the country; in a republic it is the common voice of the people. Each of you, for himself, by himself and on his own responsibility, must speak. And it is a solemn and weighty responsibility, and not lightly to be flung aside at the bullying of pulpit, press, government, or the empty catch-phrases of politicians. Each must for himself alone decide what is right and what is wrong, and which course is patriotic and which isn't. You cannot shirk this and be a man. To decide it against your convictions is to be an unqualified and inexcusable traitor, both to yourself and to your country, let men label you as they may. If you alone of all the nation shall decide one way, and that way be the right way according to your convictions of the right, you have done your duty by yourself and by your country — hold up your head! You have nothing to be ashamed of.

Only when a republic's life is in danger should a man uphold his government when it is in the wrong. There is no other time.

This Republic's life is not in peril. The nation has sold its honor for a phrase. It has swung itself loose from its safe anchorage and is drifting, its helm is in pirate hands.

"The nation has sold its honor for a phrase." I can't think of a better single-sentence condemnation of the Bush Administration's empty slogans and dead hearts.

I want my goddamn country back. I only hope there's enough of it left to salvage once the Bush gang gets done stripping it for parts.
Posted by Otto Man at Friday, July 04, 2008