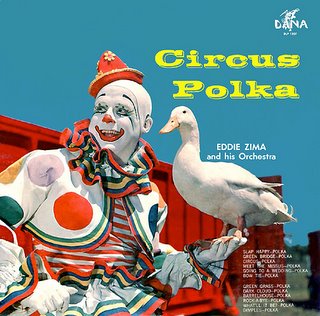 This week's featured album was apparently the result of some Dadaist art collective, pulling random words out of a hat ("... circus ... polka ... clown ... duck ...") to produce the cover art, and then doing the same with the song titles. How else can you explain titles like "Slap Happy Polka" and "Meet the Missus Polka"?

On second thought, the lead-off songs on side two might give a clue to their creative process: "Green Grass Polka" followed by "Dark Cloud Polka." I think we're going to need a urine sample from Chuckles the Clown. Upon closer inspection, that might not be make-up after all.

The disturbing appearance of the clown from Stephen King's It and the Aflac duck can only mean that it's time for another exciting installment of the Friday Random Ten. You know what to do -- set the iPod to random, and give us the first ten songs that surface. And, if you're feeling competitive, toss in a Coolness Self-Audit, too.

1. Johnny Cash, "The Ballad of Ira Hayes" -- A Columbia era song-story about one of the four soldiers who raised the American flag on Iwo Jima. The story of what happened to those soldiers after their moment in the sun is a tragic one (soon to be a major motion picture, by the way) but the story of Hayes, a Pima Indian, is perhaps the saddest. Cash's song reveals a lot about his liberal sympathies, but it's not much of a tune. 3/10

3. Jon Spencer Blues Explosion, "Blues Explosion Attack" -- This is a collaboration with Calvin Johnson and, once again, I'm let down. This is pretty much Spencer shouting street-corner insanity over a snare drum. Pfft. 2/10

4. Radiohead, "Rhinestone Cowboy (live)" -- A nice gem of a cover from the B-Sides collection. It's hard to do a lot when your inspiration is schlock, but you've got to admire Thom Yorke for going after Glen Campbell and doing it with a straight face. 6/10

5. Shirley Horn, "Return to Paradise (Mark DeClive-Lowe Remix)" -- This is a fairly innocuous remixing of Horn's original jazz tune, the kind of thing you'd find on a Buddha Bar CD compilation. Nice, but not spectacular. 6/10

6. Southern Culture on the Skids, "Mexy-Melt" -- These folks don't normally do the whole surf guitar thing, but you'd never know from this tune. Guitarist Rick Miller is absofuckinglutely on fire here with some angry, unrelenting riffs. 9/10

7. Rocket from the Crypt, "UFO>UFO>UFO" -- Speaking of angry and unrelenting, here's some in-your-grill post-punk from San Diego. I liked "Sturdy Wrists," but this is the kind of screaming cacophony that my father would've referred to as "narcotic music." Bleh. 1/10

8. Ray Charles, "I Got a Woman" -- How's that for an awkward transition? Straightforward Atlantic-era Charles, this is a good song that I can't hear anymore without thinking of Kanye West's "Gold Digger," and, moreover, the "George Bush Doesn't Care about Black People" remix by Legendary K.O. 6/10

9. Sonic Youth, "Ca Plane Pour Moi" -- An interesting cover of the early '80s pseudohit by Belgium's own Plastic Bertrand. The French lyrics seem fun, until you translate them and realize he's singing lines like "Wham! Bam! my cat Splash lies on my bed with his tongue puffed out by drinking all my whisky." Very deep, Felicity. Thanks for sharing. 7/10

10. Jurassic 5, "Break" -- I was in Austin last spring for a wedding the same time that J5 was in town to play a show at Stubbs. Tragically, the show was the same night as the rehearsal dinner, so we couldn't go. Even worse, a friend managed to chat up Charlie Tuna in our hotel lobby just five minutes before I walked in. Stupid timing. Great song. 9/10

That gives me a pathetic 5.7 average. Since I've burned all of our permanent records, I can't say for sure that that's the lowest score I've ever gotten, but it would have to be close.

1. Avett Brothers "Talk On Indolence" from a Paste Magazine sampler. Not impressed.
2. The Supremes "Stoned Love" is still good.
3. Steve Earle "Copperhead Road" is still rockin
4. Cannonball Adderly "Alison's Uncle" Cannonball is the man
5. Azure Ray "Hold On Love" from another Paste sampler. Not impressed with this one either, though I normally look forward to the Paste samplers
6. Drive-By Trucker "The Southern Thing" -- these dudes rock. Not their best, but it still rocks.
7. Grateful Dead "Ripple" -- the Dead song that never dies.
8. Miles Davis "Lament" -- the coolest man in US music history. Period.
9. Earl Scruggs/Doc Watson/Ricky Skaggs "What Would you Give in Exchange for Your Soul" -- from a live performance of the "Three Pickers." -- wonderful, classic bluegrass/Americana (plus Scruggs is from my hometown)
10. Whiskeytown "What May Seem Like Love" -- Ryan Adams'heydey was during these W'Town days. Faithless Street, the album, is about as good as alt-country gets.

Hmm.... I haven't heard the Scruggs-Watson-Skaggs combination. Have to check that out.

Not the best list ever, but good enough for you libruls.

7) No Quarter - Tool. Neat to hear Tool cover Zeppelin, but this isn't a great cover - pretty much exactly the way the Zeppelin version sounds, only with Maynard singing. 6/10

Scrugg et al -- from the live album (Alison Krauss shows up too) recorded in Winston-Salem, NC -- called The Three Pickers

You should have blended it like black shadows and ninja's n' shit.

If I had ninjas at my disposal, they'd be sneaking into Thrillhous's home and destroying his Yes Albums of Mass Destruction.

It seems that snow is going to keep us inside all weekend. I need to find a way to disable the CD players....

No ELP and no Yes makes Thrillhous something something....

That Legendary K.O. is the mad notes! Thanks for the link.