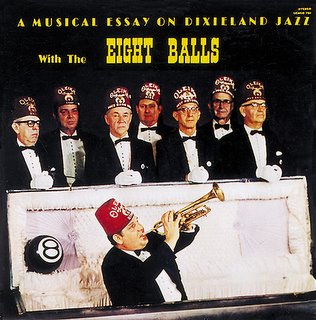 Nothing quite embodies the wild world of Dixieland jazz like a group of geriatric, white Shriners at a funeral.

Look at them. The liveliest one of the bunch is the dude in the coffin. The rest exude the kind of excitement and joy you'd only see in a urologist's waiting room. (Please insert your own "eight balls" joke here.)

I'd always thought jazz was all about free flowing music and improvisation, but these guys look about as spontaneous as the Nixon Library. Mr. Magoo on the left can't even find the photographer, so how's he supposed to find the rhythm? Welcome to Squaresville, baby. Population: You.

Anyway, the appearance of the mighty mighty Eight Balls can only mean that once again it's time for the Friday Random Ten. You know the drill, so let's do this thing.

1. Hank Williams, "No No Joe" -- A great little bit of Cold War country, this is Williams' ode to Joseph Stalin. "The Kaiser tried it and Hitler tried it / Mussolini tried it, too / Now they're all sittin' around a fire and did you know something? / They're saving a place for you." Man, I bet Stalin cried like a Trotskyite when he heard that part. 7/10

2. The Flaming Lips, "Pilot Can at the Queer of God" -- I have absolutely no idea what this song's about, and I say that having read the lyrics. Whatever. It's still a nice chunky rocker. 8/10

4. Wolf Parade, "Shine a Light" -- I just scored tickets to see these guys in concert and I am, as the kids say, psyched. Apologies to the Queen Mary is an amazing debut album, and they're supposed to be absofuckinglutely phenomenal live. Here's hoping. 8/10

5. Elvis Presley, "It's Now or Never" -- I have a soft spot for the cheesier songs in the King's repertoire, and this one certainly qualifies, what with the mariachi sounds and the "Five Neat Guys" making an appearance on backing vocals. Still, I suppose this isn't even remotely cool. 2/10

6. Curtis Mayfield, "We People Who Are Darker Than Blue" -- I pretty much love everything Curtis Mayfield ever recorded, but this is a bit of a sprawling Black Power anthem, moving through soul lyrics to congo drums to funk groove to a harp interlude (?) and back again. Not great, but I refuse to give Mayfield anything less than a 5/10.

7. De La Soul, "I. C. Y'All" -- A pretty solid collaboration with Busta Rhymes from Art Official Intelligence. This song has more bottom end than Louie Anderson. Oh, that's right. I went there. 8/10

8. Parliament, "Flash Light" -- The gold standard of funk. I made this my cellphone's ring tone last summer, and ever since, I haven't been able to hear the original without wanting to check the caller I.D. 7/10

9. João Gilberto, "Falsa Baiana" -- A nice bit of classic bossa nova from one of the masters. I may not understand a single word, but my body is still always possessed by the power of Latin rhythms. 6/10

10. Stereolab, "The Seeming and the Meaning" -- One of the most inventive and unique bands around, here with one of my favorites, a tune from the Peng! album. Scorching and sweet at the same time, this is Stereolab at its finest. 10/10

Alright, that gives me an underwhelming 6.4 on the coolness scale. It seems that I, as part of the MTV Generation, really can feel neither highs nor lows. What's that feel like? Eh.

Let's see what you've got. Break out your iPod (or steal a friend's), give us the first ten songs that pop up, and, if you damn well feel like it, throw in a Coolness Self-Audit as well.
Posted by Otto Man at Friday, February 17, 2006

Nothing to brag about today.

2) Caught in the Rain - Preston School of Industry. Pavement's version of Son Volt, though not as good as Son Volt. Still, points for being names Spiral Stairs. 6/10

3) 44 Blues - Hound Dog Taylor. If this HDT & the Houserockers album were in as many CD colletions as Simon & Garfunkel's Greatest Hits, we'd have world peace. 9/10

6) Florentine Pogen - Frank Zappa. This off of The Best Band You Never Heard in Your Life. Good stuff, but FZ has better in his catalogue. Wicked guitar solo, though. 8/10

8) The False Husband - Isobel Campbell & Mark Lanegan. Where did I download this crap? 2/10

In other news, Built to Spill has a new album coming out. They have a song on iTunes now & will be coming to a town near you.

2-The Streets - fit but you know it (sovereign remix)- out little brit eminem seemed played out quick, but the songs stand up surprisingly well, and this hip little remix just kicks up the bpm.7/10

3-The Pink Mountaintops - RocknRoll Fantasy - Black Mountain is cool, this side project is ten times cooler, mixing rock, dirge, drugs and sex into a very appealing heap of uncut coke, stone rider going down on me indeed!8/10

4-The Everybody Fields - TVA - this little throwback tune captures another era perfectly and sends chills down my spine, that goddamn TVA, stop taking my family's land away.8/10

5-Guided by Voices - Chasing Heather Crazy - ohh pollard and company can spin some drunken yarns, and sometimes even trip the pop light fantastic, this I think is one of those times - barring a poptastic 10/10 I'll be singing this most of the weekend.8/10

6-Dropkick Murphys - Good Rats - oh, already a challenger to the soundtrack for my weekend! These infectious little irish drunkards consistently supply a healthy dose of pop-punk energy and drunken relvery.7/10

7-Sun Ra and his Arkestra - Sun Ra Blues - whoa, sun ra is a crazy fucking musical madenius, and holy shit is this long...7/10

8-Amy Ray - Driver Education - the only thing Amy Ray could do any cooler is name her next album ‘is gay and eats whey’....well, that or put out a truly strong indigo girls album (for the record I am NOT a lesbian, although I do have a penchant for tie-dies and lesbian sex...)7/10

9-Gregory Isaacs - Slave Master Dub - what could be better than some mid 70's Isaacs's roots reggae?, the same song in Dub.7/10

10-At the Drive In - Heliotrope (live) - we began with some emo and end with one of the strongest emo bands that spawned many of the current incarnations (of emo, post and prog rock - for better and worse). rock out wit your cock out baby... too bad the sound level sucks on this cause the tune and energy are effin' awesome...6/10

Inani - for what it is worth, I haven't heard the HMRA sinners tune or anything from the BOLP, but that is actually a combination of two very good bands Black Lipstick and the Octopus Project, respectively, on Peek-a-Boo records out of austin. No trail-blazers but some consistently good songs, esp The Octopus Project... Peek-a-Boo also brought us Super XX Man, Silver Scooter, Knife in the Water, and notably Palaxy Tracks, and introduced many to Spoon, Shearwater and Centro-Matic ...plus they are a great bunch of people doing the truly indie thing (the label is run by Travis Higdon, guitarist and vocalist for Black Lipstick)... do your self a favor and sample their goods and spend a few bucks helping them out and making your life all the better (aforementioned Silver Scooter for the pop/emo leanings, BL and OP for your more rock oriented stylings, Palaxy Tracks for anyone with a little meelow joy division darkly encrusted vibe and a personal fave Knife in the Water for those dark Americana Types) ... enjoy.

the thoughts listed in this post are not associated in any manner with peek-a-boo or their counterparts, or in any way meant to represent reality or non-drunken ramblings
.

I'm excited about the new Built to Spill. I caught a bit of them sorta-live (closed circuit TV) at the Across the Narrows concert last summer in NYC. They're sounding great.

Jeez, when I read your guy's lists, I feel like my iTunes is a stack of old vinyl by comparison. I have hardly even heard of half of this stuff...

Sigh. And I used to consider myself cutting edge... Here comes the semi-classic rock contribution to the thread:

1. "All Wrong" - Morphine It's too bad I didn't really discover these guys until fairly recently (circa 2000). I heard 'Honey White' long before that, but wasn't interested...Big mistake. I love this band. 8

2. "Closer" - The Firm '80s "supergroup" featuring Jimmy Page and Paul Rodgers. I ate this stuff up with a spoon in high school...no wonder, twenty years later, it's pretty much pablum. And this is one of the better songs. 5

3. "Two Princes" - Spin Doctors It's probably completely dorky to confess, but this song still holds up. A fun band for what they are, which is goofball hippies who happen to be great musicians and catchy songwriters. 6

4. "Sexual Healing" - Soul Asylum It might be blasphemy to many, but this is a pretty good cover of Marvin Gaye. They play it straight, pretty much Gaye with the "soul" dialed down and "rock" tweaked up. I cannot listen to this band without remembering a friend, Jim, from St. Paul who had such a visceral hatred for this band that you'd think Jim was either going out with Winona Ryder or depended solely on income from shampoo sales when Dave Pirner showed up and made it big. 8

5. "Mockingbirds" - Grant Lee Buffalo The radio hit off a great album. It prompted me to buy several others, none of which I ever listened to more that once or twice. 7

7. "Bring It On Home" - Zep Plant and Page had a habit of burying the best songs on the back end of the album. This is one of several, great "last" songs. 10

8. "Naveed" - Our Lady Peace I hope Scott Stapp stays up nights wishing Creed was ever as good as OLP. 8

9. "Only Talking Sense" - The Finn Brothers Fairly forgetable song from the guys behind Crowded House, off a Paste CD or something. On the plus side, it prompted me to go on iTunes and buy some Split Enz. 4

10. "Moonlight Mile" - Stones The Glimmer Twins also like to throw the epics at the back end of the album. In this album's case, "Sticky Fingers" is just too loaded for this to rank very high. 7

7.2 average. Not bad. At one time or another, several of these songs were among my favorites, it's interesting to see which ones held up, and which didn't.

This week, my list features several songs from a band whose name is the same as the answer I from most women.

1) Photograph - Leppard. There is no emoticon to express how awesome this song is. 10/10

4) Excerpts from the 6 Wives of Henry the 8th - Yes. Technically this is a Rick Wakeman jam session, arms and Rapunzel-like hair flailing, but it's on Yessongs. 6/10

6) Mother - Floyd. Man, I was so hoping this would be the Danzig song. I like Roger Waters and all, but his neck is just too damned thin. 5/10

Actually, the answer he gets is "Floyd" because he always asks women what the name of the barber on the Andy Griffith show was.

It's a weird come-on line, but hey, he's a unique guy.

In response to "You really took out a restraining order?"

1)Milktoast - Helmet. It rocks. Minus 1 point for being on both The Crow soundtrack and on their studio album "Betty"...I hate when bands do that! (7/10)

2)Moonlight Sonata- Beethoven. He was a crazt artist before crazy artists were cool (9/10)

6)Father- Tori Amos. I want to cry like a fallen figure skater whenever I hear this song. Absolutely not cool (4/10)

9)My Iron Lung- Radiohead. This whole album is great. Pretty much anything off of The Bends could've played and I'd give it a (9/10)

Hey Otto,
Someone is finally stealing from you (and it's the Onion, sort of, to boot).