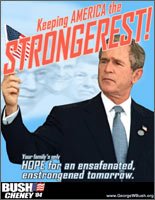 Just 17% of Americans believe Dubai Ports World should be allowed to purchase operating rights to several U.S. ports. A Rasmussen Reports survey found that 64% disagree and believe the sale should not be allowed....

From a political perspective, President Bush's national security credentials have clearly been tarnished due to the outcry over this issue. For the first time ever, Americans have a slight preference for Democrats in Congress over the President on national security issues. Forty-three percent (43%) say they trust the Democrats more on this issue today while 41% prefer the President.

The preference for the opposition party is small, but the fact that Democrats are even competitive on the national security front is startling. In Election 2002, the President guided his party to regain control of the Senate based almost exclusively on the national security issue. On Election Day that year, just 23% rated the economy as good or excellent, but the President's Party still emerged victorious.

As anyone who hasn't spent the past five years in a coma will know, Bush has consistently trumped up the foreign dangers we face and consistently puffed up his own record as a danger-facer-downer. No matter what happened domestically -- the NCLB disaster, the 2003 blackout, the economic slump -- Bush's supposed strengths on national security always remained a saving grace at the polls.

But recently, we've seen a steady erosion of Bush's security credentials -- first, with the incompetent handling of Iraq and the inability to get Bin Laden; then, with the botched DHS response to Katrina that showed they couldn't even handle a disaster that they'd seen coming for weeks and even held a dress rehearsal for; and finally, the UAE port security screw-up, and all the light it's shed on how casually the administration handles the nuts and bolts of our national security infrastructure.

It took a while to shake Bush's ill-gained reputation as a strong defender of America, but we're finally here. The American people are starting to think the Democrats are a better option on national security, a trend that's only going to pick up speed as the Fighting Dems take to the campaign trail.

This could be a big year for the Dems. Gabby Hayes big.
Posted by Otto Man at Friday, February 24, 2006

This recognition that Bush and the Republicans talk a better security game than they play, and that Democrats are serious players, is ironic and way late in coming about.

Here's an excerpt from an Oh!pinion post published last May 29. It's one of many I've done on this matter:

"Look who’s talking security: Democrats are supposed to be weak sisters where security and defense are concerned. As can be seen in the news story’s citations in this matter, that’s a bum rap.

In fact, it’s a bum rap all around. Democrats have been in the lead among those demanding action on the need to better armor Defense Secretary Rumsfeld’s bad-idea flyweight vehicles. In fact, Democrats, with Massachussetts liberal Rep. Ed Markey in the lead, have worked tirelessly to get parcels carried aboard commercial jets properly inspected and our seaports properly secured and surveilled. And Sen. John Kerry, during last year’s presidential campaign, called for adding two divisions to the active-duty Army, before President Bush decided that would be a good idea."

Face it, the GOP's spending of hundreds of millions of dollars on attack ads over the last six years has had an effect. That effect has been broadened and bolstered by the additional battering Democrats get constantly, and usually dishonestly, from the right-wing propaganda industry.

If people are finally waking up to the fact they've been sold a bunch of baloney, it's not just good news, it's kind of a miracle.

Well, George Will tells me that libruls are angry and pessimistic and terribly unhappy, so I guess I have to say that I think this polling stuff is just a blip. I know W's natl security ratings have been declining for a year now, but I still think the repubs are still the security mavens, according to the bullplop conventional wisdom. Just look at the war approval ratings. Most people now think it was the wrong decision, yet the media still behaves as if war critics are a lunatic fringe group.

I just think the repubs are way better at national security politics (not policy), and no matter how many vets run as dems, this view will persist. People seem to think that national security is best controlled by rabid attack dogs. The very idea of caution or careful planning is a sign of weakness. Competence also doesn't enter into the equation.

This recognition that Bush and the Republicans talk a better security game than they play, and that Democrats are serious players, is ironic and way late in coming about.

Well, George Will tells me that libruls are angry and pessimistic and terribly unhappy, so I guess I have to say that I think this polling stuff is just a blip.

That Pew poll showing conservatives are happier than liberals today has cropped up all over the internets as some kind of "proof" that they're doing something right. As someone said over at Balloon Juice, just seems to be proof that ignorance really is bliss.

"The very idea of caution or careful planning is a sign of weakness. Competence also doesn't enter into the equation."

Finally the dem's strategery of "Win by Default" seems to be paying dividends.