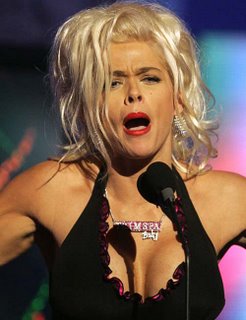 For those of you who think that the Bush administration doesn't care about good, honest, hard-working Americans, think again.

Taking time out from their busy schedule of pardoning moonshiners and just generally destroying America, the White House has dispatched the Solicitor General of the United States to put the power and prestige of the nation alongside a distingusihed citizen who has been egregiously wronged by an out-of-control federal judiciary: former Playboy Playmate and current substance abuse expert Anna Nicole Smith.

This AP article tries to understand the reasons for the administration's intervention:

She is trying to collect millions of dollars from the estate of J. Howard Marshall II, the oil tycoon she married in 1994 when he was 89 and she was a 26-year-old topless dancer in Houston. Marshall died in 1995.

Like Marshall, President Bush was a Texas oil man. Both attended Yale. Both held government positions in Washington.

There are differences. Marshall had a penchant for strippers, and the court record before the justices is one of poverty, greed, sex and family rivalry.

Am I the only one who thinks the president's horndog brother Neil Bush had a hand in this? (And I say "a hand." The other one was doubtlessly busy.)
Posted by Otto Man at Wednesday, December 28, 2005

And my next post, on the need for the enlargment of the country's penal system, will only deepen those suspicisions.

That will be a hairy bush of an topic. Potentially barely legal.

I say give her all of the money the old coot had and even more fromn his dick head sons. She was his wife after all and she earned every dime of it.

I think the reason that the Bush camp is getting involved is that a loss here would undermine the whole scantity of marriage crap. After all, if a perfectly legal marriage between a man and a woman can be tossed out, then it questions which marriages really are valid and what are the requirements. If it turns out that for a marriage to be valid that it needs to have two partners who actually love and commite to each other, then i:d wager most same sex marriages would pass the test.

Also, if i happen to marry a 26 year old stripper when i:m 89 and leave her everything and then some jacka$$ tries to screw it up, then i promise i`ll haunt the heck out out you all. You`ve been warned.

What was Neil's other hand doing? Picking at his herpes sores?

The more I learn, the more I wish George H.W. Bush had practiced early withdrawal long before Desert Storm and his order to our troops not to push on to Baghdad.

As for this Anna Nicole Smith case, it probably shows up on the Bush & Co. radar screen because of the Texas connection, plus the fact a millionaire was involved. Plus, probably, somebody down in Texas who's pumped money into the Bush plague upon the land called in some chits.

I wonder if it's the same unnamed millionaire who opened his checkbook for the Swiftboat slime wads. That would just about figure.

You know, I usually can't help but look at pictures of ANS, but that one is rough. Looks like she's having a bad poop or something.

A reader (a conservative friend of mine from the real world who didn't want to subject himself to our rapier wits) emailed me an interesting comment on this.

The article does actually explain exactly why the feds are intervening: "The Bush administration's filings in the case are technical. Without getting into the details of the family squabble, Solicitor General Paul Clement said that the justices should protect federal court jurisdiction in disputes."

My friend points out that there's actually a conservative principle/issue being mauled here: states rights. Why is the admin trying to argue that a state matter (divorce proceedings) should be heard at the federal level?

Neil's other hand was on his "little derrick."

I think the violation of state's rights on this issue is actually consistent with their general interest in marriage these days -- they want federal standards over the institution to prevent the icky gays from marryin' and as a result they need to have federal supremacy over all facets of it, including the strippers'n'geezers combination.

Republicans stopped being heavily concerned about states' rights about the time they realized doing so wasn't gaining them the support and cooperation of Dixiecrats. And that happened shortly after it became clear the civil rights movement couldn't and wouldn't go away or be turned back.

What happened instead, of course, is that the Dixiecrats became Republicans or lost their seats in Congress to Republicans.

It's just another example of Republican Calvinball.