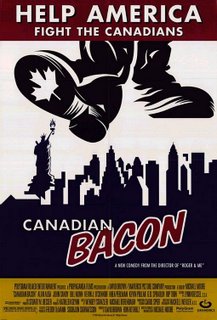 I've been wondering where the third front in the Awesome Global War on Terra would open up, but until now I hadn't really considered a target that's really an obvious choice -- Canada.

For far too long, they've been lurking above us, launching cheap prescription drugs across our borders and sending us wave after wave of brilliant comedic talent. I, for one, have had enough.

And it looks like I'm not the only one. As the Washington Post reveals, the government has had a plan for invading Canada on the books since the 1930s:

It's a 94-page document called "Joint Army and Navy Basic War Plan -- Red," with the word SECRET stamped on the cover. It's a bold plan, a bodacious plan, a step-by-step plan to invade, seize and annex our neighbor to the north. It goes like this:

First, we send a joint Army-Navy overseas force to capture the port city of Halifax, cutting the Canadians off from their British allies.

Then we seize Canadian power plants near Niagara Falls, so they freeze in the dark.

Then the U.S. Army invades on three fronts -- marching from Vermont to take Montreal and Quebec, charging out of North Dakota to grab the railroad center at Winnipeg, and storming out of the Midwest to capture the strategic nickel mines of Ontario.

At that point, it's only a matter of time before we bring these Molson-swigging, maple-mongering Zamboni drivers to their knees! Or, as the official planners wrote, stating their objective in bold capital letters: "ULTIMATELY TO GAIN COMPLETE CONTROL."

Let this be a warning to our neighbors to the north: Our president is clearly batshit crazy, and he's just one whisper from God away from launching an all-out assault on the Great White North.

Bush isn't really one for "war plans," though, so I doubt we'd see him follow this well-researched script for the Canadian invasion. Instead, he'd probably focus on raiding the Blue Jays roster and securing the Labatt's breweries.

And, of course, rounding up all the Frenchies in Quebec. You know they're on his list.
Posted by Otto Man at Friday, December 30, 2005

Amazingly Canadians (liberal, socialist, and conservative) are completely united on their dislike of Bush. In spite of a massive corruption scandal with the liberal party, the simple mention of Conservative party in Canada equals the Canada "Bush" has prevented the Conservative from making any progress.

Interestingly, what Candians do understand (and the avg American doesn't) is trade and how the "fair trading" US is screwing Candian lumber.

Don't get me started talking about lumber!

That's interesting about Canadian politics. Seems like that's a common thing. How many European leaders have either won or maintained their grip on power by opposing Bush?

The connections between "conservative" and "Bush" have had repercussions across the globe. Central America and Europe are seeing a lot of leftists get elected, and a lot of big names (Schroeder in Germany) made hay in the last election by running against Bush. Schroeder lost a close one, but I think the con-bashing was a good reading of the electorate.

I'm not sure, but I think just about all of the people who've sided up with Bush on Iraq have gone down. Aznar got the boot, Blair is clearly on the way out, etc. The only one who held on to power was John Howard in Australia, but let's remember that Australia is pretty much a Red State. As Bill Hicks put it, Australia is Arkansas with a beach.

I think the chicks have teeth though....

well, not to drift too faroff topic, but let me take this opportunity (because i never miss a chance) to say "SCREW MICHAEL MOORE". i can`t think of one person more responsible for galvanizing the reps and blowing the last election. the dems used to at least have the moral high ground, but his innuenos and half truths have tarnished the whole party. he is the rush limbaugh of the dems and the dems are poorer for it (but he himself is much richer). SCREW MICGHAEL MOORE!!

No offense, Joe, but the high ground has never done much for the Democrats.

Mondale realistically predicted the late 80s tax increases, and got hammered. Dukakis refused to respond in kind to Lee Atwater's lies and mudslinging and lost a 30 point lead and the election. Clinton gave as good as he got, and that kept him afloat. Meanwhile, Lieberman bent over backward to respect military absentee votes in 2000 and that cost them the election.

I'd love to be able to keep the high ground and win, but I don't think it's possible anymore. We've got to get our fingernails dirty.

However, if that was for some reason to become a goal necessary for U.S. survival, I'm sure Fearless Leader would end up ordering an invasion of, say, Belize.

As for keeping the high ground vs. getting fingernails dirty, I suspect it depends on who's running. Get someone with the charisma and likeability of a JFK or Reagan, and keeping to the high ground will probably work all right. Otherwise, the next Dem presidential candidate had better have hairy palms, long incisors and be prepared to go for the jugular at the first sign of swiftboating.

The only reason right wingers will turn away from Atwater/Rove-type tactics is if those tactics backfire or fail spectacularly a time or two.

i hear what you all are saying, and agree to a point. as someone who doesn:t trust politicians as a general rule, i agree that the dems needed to level the playing field, but Moore isn`t a politician. He was trying to represent the entire party (read: the people) and made everyone look worse for it. it`s always been easy in the past to dismiss a rep whenever they argue because they would invariably say "well, i heard on rush the other day..." and then you knew they were full of crap. Now dems are just as easily rebuffed by just pointing out the obvious distortions that Moore made a mint off of.

I agree that it`s better to win then to keep the higher ground, but now that Moore has given it up for everyone, what have you got to show for it?