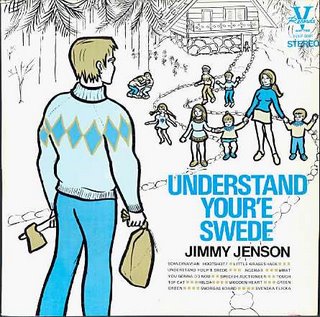 "Understand Your'e Swede"? Maybe they should first try to understand ow'er English. The title of this album is so badly botched I can't tell if it's a Swedish language instruction album or a introduction to Swedish culture for the new owners of Swedes who want to understand their servants' world better.

Either way, I'm not sure I want to understand anything about the Swedes. Apparently, their culture consists of snowbound games of Red Rover and drifters who roam the trails with a hatchet and a brown paper bag that, in all likelihood, contains a severed head. Or Swedish meatballs. Either way, not appetizing.

Anyway, the arrival of our disturbing Nordic friends from the North can only mean that it's time, once again, for the Friday Random Ten. You know the drill by now -- take out your iWhatever, set it on random, and give us the first ten songs that pop out. If you'd like to get self-reflective, add in a Coolness Self Audit as well, rating the songs on a scale of 0 to 10, with a zero representing the musical equivalent of the needle coming off the record and a perfect ten standing in for something you'd like to walk into a bar in slow motion.

1. The National, "Looking for Astronauts" -- I don't care how many goddamn hipsters tell me this band is great, the simple fact is that they're not. They are, in fact, one of the suckiest bunch of sucks who ever sucked. I'd say more, but my damn wiener kids are listening. Get off my iTunes, and take those assclowns from Of Montreal with you. Boo. 2/10

2. The Magnetic Fields, "Love Goes Home to Paris in the Spring" -- This'll get the shitty taste out of my mouth. Beautiful indie pop from Stephin Merritt and company, off the excellent 5-song House of Tomorrow EP. The wheels have started to come off Merritt's music machine in recent years as he tries to front four different bands at once (Magnetic Fields, Gothic Archies, Future Bible Heroes and the 6ths) and still maintain the public profile of a slightly miffed hermit. But the heyday of the Magnetic Fields was nothing but gold, and this is right in the sweet spot. 8/10

3. Iron & Wine, "Waiting for a Superman" -- I normally love Sam Beam's mellow reworking of indie favorites ("Such Great Heights," "Peng! 33," etc.) but this is almost a little too mellow. In fact, I think he might be slipping into a coma around the third verse. Still, nicely sweet, especially the guitar solo. 7/10

4. Linda Lyndell, "What a Man" -- A scorching soul song that was later ripped off by Salt'n'Pepa for the chorus of their mid-'90s hit of the same name. The aftertaste of that Chippindalesque video aside, the original is a classic bit of soul. I found this on the excellent Soul Sides collection recently put out by the blog of the same name. Lots of great stuff there. 9/10

5. Dr. Octagon, "Ants" -- While I love the Zapp-like bass-bottom distortion here, that's pretty much all this hiphop tune has going for it. The lyrics aren't that great, the vocals disappointing, and the song rambles more than an Oscar acceptance speech. Eh. 3/10

6. Al Green, "I Want to Hold Your Hand" -- Not only is this a weak cover of the Beatles' classic, but it doesn't even sound like the Reverend Green. He seems to be doing an Otis Redding impersonation, and at times drifts into a little Sam Cooke. He's so all over the place in this song, I forgot who I was at the end. 4/10

7. Nirvana, "Smells Like Teen Spirit" -- This is an obscure song by a grunge trio from the Northwest. I doubt they're going to go anywhere. This was once cool, but I think it's been played to death. 6/10

9. Stevie Wonder, "For Once In My Life" -- I've always loved this song, but when it became the redemption song for superagent Ari Gold on last season's "Entourage," that kicked it up another notch. Hug it out, bitch. 8/10

10. Chico O'Farrell and Clark Terry, "Spanish Rice (DJ Dolores Mix)" -- This is from a new compilation of jazz tunes remixed by current DJs, called Impulse! The songs here are a little less dancy than the Verve Remixed series, and a bit more left field. The compilation is a little uneven, but this one is good. Our chef recommends that you pair this remix of "Spanish Rice" with the remix of Willie Bobo's "Fried Neckbones and Some Home Fries." 7/10

Alright, I was all over the place today. I wound up with a 6.3 average, which represents yet another step in my slow but steady descent to craptacularity. At this rate, I'll be polling near the president by fall.

Let's see what you've got, folks. Fire up your newfangled electronical musical doohickeys and give us the first ten songs that spill out. And, if you'd like, throw in a Coolness Self Audit as well.
Posted by Otto Man at Friday, April 07, 2006

Nirvana...hmmm...didn't their lead singer choke on a ham sandwich or something?

2)Alice in Chains- Them Bones. I first heard this song performed live by a local band rehearsing in a barn on a chilly autumn afternoon. They were good, but they were no AIC. (7/10)

4)Jimi Hendrix- Manic Depression. Probably my favorite Jimi song. Whatever happened to this guy from Seattle? Didn't he choke on a ham sandwich or something? (9/10)

5)Cypress Hill- Throw Your Set In The Air. Plus two for being featured on the Simpsons. (8/10)

6)Soul Aslum- 99%. I have to play up my indie credibility here. I saw Soul Asylum play before "Grave Dancers Union", before "Clerks"...before they had honed their skills, actually. (8/10)

7)Mazzy Star- Ghost Highway. Not that great...sounds like, desperate for filler, they just started plunking away on the instruments. (4/10)

7.2! I think that's my highest ever. So why do I still feel so empty inside?

I've wondered before if Of Montreal was some sort of (admittedly kind of awesome) joke perpetrated by Pitchfork Media. Thank goodness I just downloaded a couple songs for free didn't waste my money at the record store, or I'd have to put Stossel on the payroll.

It's a well known fact that most Swedes are dumber than three Jonah Goldbergs bungee-corded together. And that's not my 3/8ths Norwegian heritage talking, either.

I came up with an average of 7.14, but I didn't have time to write commentary, so I can't prove it. Ratings at my place, nonetheless.

Nirvana...hmmm...didn't their lead singer choke on a ham sandwich or something?

Ah, Mama Cass. Easily the greatest rock and roll death of all time.

Like a phoenix rising from the ashes, The Doc rises from his broken computer with a...slightly less broken one to join this FRT already in progress!

1. The World's Gone Mad - Handsome Boy Modeling School (ft. Del Tha Funky Homosapien). A little low-tempo for me, but far be it from me to badmouth Chest Rockwell, Nathaniel Merriweather, et al. 7/10.
2. Be In My Video - Frank Zappa. The 60s doo-wap in this song is interesting, but it's essentially a better-than-average novelty song with exceptional lyrics. 7/10.
3. Peaches En Regalia - Frank Zappa. Now THIS is a song! No complaints here. 9/10.
4. Iko Iko - Zap Mama. A gem from the mostly useless MI:2 soundtrack. It brings back strange memories of Sharon, Lois & Bram's version. 8/10.
5. Nothing's Impossible - Depeche Mode. "Playing The Angel" was a much better album than I was initally willing to give it credit for, but this song's a mess. 4/10.
6. Someday You Will Be Loved - Death Cab For Cutie. Is it still okay to like Death Cab? I know the backlash has been awful fierce lately, but I think I'm just going to ignore it. One of the best songs off the new album. 8/10.
7. Price of Gas - Bloc Party. Gets the toes tappin' and the head bobbin', but nothing to write home about. 6/10.
8. Encore - DJ Dangermouse. Man, Jay-Z plus Beatles = Gold, approximately 90% of the time. 8/10.
9. Hope There's Someone - Antony & The Johnsons. I love and hate this band alternately. Let's see if you can figure out what I'm feeling today. 2/10.
10. Painted on my Heart - The Cult. Another good song from a worthless soundtrack (Gone In 60 Seconds). Personally, I love this song, but it's not going to win me any cool points. 5/10.

So, with a total of 64/100, I make a whimpering return to the fold. Hopefully I'll make a bigger splash next time.

Verification Word: WWATTD. What Would Arthur & The Tick Do?

A decidedly Meh FRT from the Pooh-Pod, though we get consecutive Grey Album infused entries, which ain't wrong at all:

2. "Solvejg's Song" - Duke Ellington. From the "Three Suites" album where Duke takes on Peer Gynt, among others. Not my favorite piece, but it's fun to here 'classical' music played in that almost sloppy, 'jazzy' style. 5/10.

3. "On & On" - Erykah Badu. I think I've moved away from the period in my life when I really enjoyed hip hop soul. But a nice groove nonetheless. 5/10.

4. "Left Hand Suzuki Method" - Gorillaz. HUGE "Electric Mud" sample here that I never noticed before. Beyond that, who doesn't like giant cartoon apes? 7/10.

5. "There Was a Time (I Got to Move)" - James Brown. HEEEEEEEEY! James Brown would have delivered the best opening and closing arguments ever had he been a lawyer. "Jury, are you with me? HEH!" 8/10.

6. "What More Can I Say (Grey Version)" - Jay-Z Ft. DJ Danger Mouse. I'm on record as saying this album is about the best argument there is for an expanded definition of fair use in IP. 8/10.

7. "Patriot Game" - The Clancy Brothers and Tommy Makem. Irish Civil War anthem. Pretty sure this is the first band I ever saw in concer (for whatever reason, my parents were huge fans, and they came to the 'Burg about every 9 months or so.) 7/10.

6.4. Not the best, but not the worst from you, little White Hardrive that could.

Thrillhous is out of town, so I thought I'd see what would come up in his music files...

1. Immigrant Song - Led Zeppelin 7/10
2. Morning Warbler - Lang Elliott With Donald & Lillian Stokes
Who are these people? It's just a bird chirping. At least it's not Yes! 7/10
3. Lucky Man - Emerson, Lake & Palmer 4/10
4. Interstellar Overdrive - Pink Floyd
This sounds like a guitar-tuning session. 1/10
5. My God - Jethro Tull
Hmmm....I am pleasantly surprised. I think this is better than their famous song. 6/10

I sure hope so. I'm seeing them live on Friday.

In my book, they're always good.