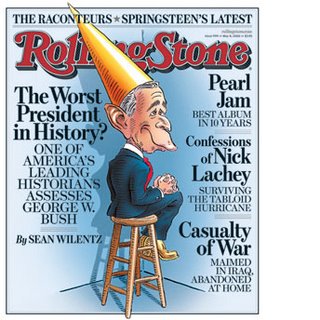 Although the president doesn't claim to care about his place in history, the blogosphere has been returning to the question again and again -- will George W. Bush go down as the Worst President Ever?

Luckily for us, one of the country's top historians has taken a serious crack at answering that question. Sean Wilentz, a professor of history at Princeton, recently won the coveted Bancroft Prize for his book, The Rise of American Democracy: Jefferson to Lincoln. In the latest issue of Rolling Stone, he offers a rough draft of Bush's place in history. And it doesn't look good:

George W. Bush's presidency appears headed for colossal historical disgrace. Barring a cataclysmic event on the order of the terrorist attacks of September 11th, after which the public might rally around the White House once again, there seems to be little the administration can do to avoid being ranked on the lowest tier of U.S. presidents. And that may be the best-case scenario. Many historians are now wondering whether Bush, in fact, will be remembered as the very worst president in all of American history.

From time to time, after hours, I kick back with my colleagues at Princeton to argue idly about which president really was the worst of them all. For years, these perennial debates have largely focused on the same handful of chief executives whom national polls of historians, from across the ideological and political spectrum, routinely cite as the bottom of the presidential barrel. Was the lousiest James Buchanan, who, confronted with Southern secession in 1860, dithered to a degree that, as his most recent biographer has said, probably amounted to disloyalty -- and who handed to his successor, Abraham Lincoln, a nation already torn asunder? Was it Lincoln's successor, Andrew Johnson, who actively sided with former Confederates and undermined Reconstruction? What about the amiably incompetent Warren G. Harding, whose administration was fabulously corrupt? Or, though he has his defenders, Herbert Hoover, who tried some reforms but remained imprisoned in his own outmoded individualist ethic and collapsed under the weight of the stock-market crash of 1929 and the Depression's onset? The younger historians always put in a word for Richard M. Nixon, the only American president forced to resign from office.

Now, though, George W. Bush is in serious contention for the title of worst ever. In early 2004, an informal survey of 415 historians conducted by the nonpartisan History News Network found that eighty-one percent considered the Bush administration a "failure." Among those who called Bush a success, many gave the president high marks only for his ability to mobilize public support and get Congress to go along with what one historian called the administration's "pursuit of disastrous policies." ... [T]hese figures were gathered before the debacles over Hurricane Katrina, Bush's role in the Valerie Plame leak affair and the deterioration of the situation in Iraq. Were the historians polled today, that figure would certainly be higher.

Be sure to read the whole piece. It's incredibly comprehensive, and pretty convincing.

The competition for Worst President Ever is pretty fierce, but as more and more time goes by, I'm starting to think Dubya can win this one.
Posted by Otto Man at Thursday, April 20, 2006

I don't think there's any question. There hasn't been one single policy he's implemented that I've agreed in both principal and execution. We've still got two-and-a-half more years to go, and I somehow just can't imagine him suddenly doing a great job.

Hold on, hold on...Pearl Jam is still together?

Depressing. I feel so proud of where we are headed as a country right now. We are solidly heading, as quickly as possible, towards a strange combination of the WORST traits of: Communist China, the Taliban, every negative stereotype of Stalinist Russia and a blatant ignorance of domestic needs a la pre-Parliament England.

The trickle-down into State politics is equally astounding. The nonprfit, social organizations represented by my firm barely see the light of day in many offices, set aside by a major crush to create as many new felonies as possible, and find as many ways to skirt Roe v Wade as can be conceived, before our own elections in August/November.

I, for one, welcome the New Dark Ages.

We've run out of our own country's retro fads, so it'll be nice to get all 8th Century for a while. Rags, the plague, and witch-burning. It'll be fun!

Sheesh, the historians didn't mention Bush's idol, Cal Coolidge — a complete nutball before it was over with.

I continued to call Bush "one of the worst" until the NSA domestic spying thing came up. That, on top of the post-Katrina debacle, sealed the deal. Bush is the worst president, the screw-up-in-chief against whom all who follow will be measured and the fool's gold standard of lousy leadership.