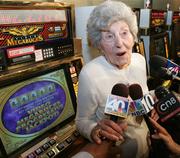 ATLANTIC CITY, N.J. (AP) -- For 84-year-old Josephine Crawford, the golden years just got a lot more golden. About to call it quits after a night playing slot machines, the Galloway Township widow hit a $10 million jackpot late Tuesday, the biggest in the history of casino gambling here.

The retired waitress knew when the nickel slot machine's bells went off that she'd won something but didn't know what. When a slot attendant at Harrah's Atlantic City casino told her it was $10,010,113.48, she didn't believe him. "I said, 'Oh, come on.' But he just stood there and I figured, why is he staying there?" she said Wednesday.

Crawford, who has been gambling in Atlantic City casinos since the first one opened in 1978, had never won more than $1,000 at a time before. She still hadn't decided Wednesday whether to take the money in a 25-year annuity or in a lump-sum payment of more than $5.5 million, but she has 21 days to make that call.

Let me get this straight. She's 84, and she's having a hard time deciding whether she should simply take the $5.5 million payout right now or whether she should hold out until she's just 109 years young to collect the full amount.

That's a lady I'd like to play poker with.

If she's really trying for the treasury job, she could beef up her resume by shooting one of her gambling buddies in the face.

Thanks for the love, folks. I'll be here all week.

I'm not sure she's senile and grumpy enough for Cheney's job, but she seems to have Crazy Old Coot down pat. So watch your back, Rummy.