The Buck Stops Over There 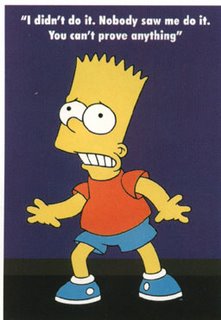 Sweet Zombie Jesus! I drop off the radar for four days to handle a family emergency, and the whole damn planet goes apeshit crazy.

I still haven't wrapped my head around the insanity in the Middle East, so I thought I'd just focus for now on what I know best -- the insanity here at home. These may all be old news to you by now, but if you haven't read them yet, be sure to check out Kevin Baker's piece on the tried-and-true "Stabbed in the Back" myth that conservatives will be rolling out to explain the failure in Iraq, Spencer Ackerman's TNR piece on conservative claims that Al-Qaeda has infilitrated the State Department, and Alan Wolfe's excellent piece on "Why Conservatives Can't Govern."

All three pieces are great on their own, but together they highlight a common theme running through the last fifty years of American conservatism -- their habit of blaming others for their own failures. Their foreign adventures don't crumble from their own incompetence or poor execution, but rather because some mean ol' newspaper dares to criticize them. Their domestic bungling stems not from the inherent shortcomings of modern conservatism, but because Republican leaders are tricked by liberals.

Sheesh. Whatever happened to all that talk about a return to personal responsibility after the nightmare years of Bill Clinton's reign? Does it only apply to welfare mothers?

On the bright side, many of these same conservatives are convinced that the trouble in the Middle East is a sign that the Rapture is imminent and are giddy with anticipation that they'll soon be leaving the planet. At least the rest of us can look forward to an end to all their whining.
Posted by Otto Man at Saturday, July 15, 2006

Otto Man, great to have you back. I had been having to listen to TV to tell me what to think. I still don't know much, but this "sweat abdomizer belt" makes me look like I have breasts.

Great to be back. Although, seriously, checking in on the news after a four day absence and finding out about the Mumbai bombing, the Israel-Lebanon war, and all the other insanity was a little much.

It felt like that Bill Hicks routine where he flies from L.A. to London on the day of the Rodney King riots and gets off the plane to see a headline: L.A. BURNS TO GROUND. "Shit. Did I leave a cigarette burning?"

I hope everything's alright with your family. Welcome back.

Regarding your post, the kernel of all of it is hypocrisy. Not just your everyday, run-of-the-mill hypocrisy but something overhwhelming that feeds on itself, growing more intense and refractory, the more its existence and ill effects are pointed out to them.

Thanks for the kind thoughts, folks. It was a rough week, but it looks like everything's alright now.

otto I too welcome you back with warm greetings and well wishes for the fam...hope all is well..

Re: that Rapture link. Why are these lunatics so into emoticons? I mean - really into them.

And if there people are so convinced the end of the world is coming, can I have their "ungodly possessions". I got some water from the river Jordan that can baptize away the last hours with....

Heavens Gate here we come. Where are my Nikes??!!

Re: that Rapture link. Why are these lunatics so into emoticons? I mean - really into them.

That was creepy, wasn't it? I have an image of middle-age shut-ins with lots of kitten posters on their walls.

I'm not sure if I've ever mentioned this before or not, but every once in a while your Capt. Chaos really brings a smile...

Every once in a while? That's my favorite nonporn image on all the internets. Absolutely brilliant.

That comment was the highlight of my week. I am forwarding it to my wife who assures me I only amuse myself. (Wait that sounds wrong, although factually correct.)

Count me among the BIG fans of the pic.

I was just amusing myself this weekend going to Sudio D's profile page to get the full-sized image. HIGH-larious. (No pun intended.)