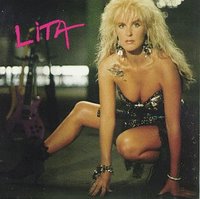 We all know I'm a real man who likes real-man rock music, unlike the types who usually post on the Friday Random Ten. One of the fundamentals of real-man rock is that everybody in the band is a man. It's a well-known fact that women just can't do real-man rock, most especially the singing. There simply is no female equivalent to Sammy Hagar, Bret Michaels, or Geddy Lee.

There's always an exception to the rule, in this case three, in order of manliness: Lita Ford, the Wilson sisters from Heart, and Janis Joplin. In each case, however, these women were backed by manly men musicians (the bong-rattling bass of Don Nossov proves this point tenfold). You could rock out to these folks and still have a virtual sausage fest.

But now I am brought low. A co-worker loaned me The Woods, by the all-woman band Sleater-Kinney. I figured I'd listen to it just so I could trash it authoritatively, but the unthinkable happened - I'm hooked. The technical skill is low, the singing is sometimes off key, and the drummer has a big booty. But still I listen, and listen. 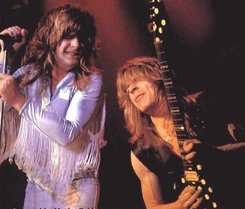 Let's hope it's a passing phase, because I don't know how long I can take this. After listening to the Sleater-Kinneys (just the name kills me; it's like the band is a married
couple from the 1980s), I have to purify my soul with an Ozzy penance: 2 Bloodbath in Paradises, 1 Tattoo Dancer, 1 No Bone Movie, and any 3 live songs with Randy Rhoads. I just ain't got the time, man!

If you aren't so embarassed for me that you've clicked away already, I'd love for you to stoop to my level and name a band or album you're embarrassed to like. Help a brother out; it's cold out here.
Posted by Thrillhous at Saturday, July 29, 2006

That's to funny TH. I am not above loving chicks who rock. Sleater Kinney is one of the rockinest chicks around. You may want to check out The Donnas, which is what AC/DC would be if they had vaginas.

Too bad Sleater-Kinney just broke up!

When my family went on vacation to southern Arizona, we rented a car with a CD player, and we got the CD from somewhere. That CD just always reminds me of the great times we had, and the sometimes surreal landscape. I know it's uncool but....mmmeeeemmmoorries...

I have to disagree I-rod about the Donnas. They appeared in a movie with Melissa Joan Hart. Major not rock points.

Also it's okay to like the first Coldplay album, but that's where everyone should draw the line.

Yeah, I've heard several people admit to liking a Coldplay album. Seeing as how I am almost never exposed to new music, I'm not sure I've ever heard them.

Isn't it something how your taste in music really broadens on a long trip? Especially in the olden days when all the car had was a radio. So very many AM gospel stations . . .

Thanks for the props, SSB. Homer explaining rock and roll to the kids is one of my all-time favorite scenes.

I know this is totally off topic, but have you guys seen how much Mel Gibson looks like Sadam?

I have to take a shot at a right-wing nut like Gibson any chance I get.

T-House, Sleater-Kinney rock, pure and simple, and you accepted it despite their ladiness. Good on ya. (Then again, this is coming from the They Might Be Giants and New Pornographers fan, so...take it with a grain of salt.)

In terms of bands I'm embarassed to like, I suppose you could list Prince and the Pet Shop Boys, except I'm not embarassed about liking them. I mean sure, on some level I know I should be, but I just can't do it. They're GOOD, dammit!

Doc, you shame me with your lack of shame. I'd only just gotten over my infatuation with The Connells when this S-K thing happened. Someday I, too, may be able to hold my head high.

Tough time to get into S-K, what with the break-up at all.

I'm still kicking myself for mssing the whole Pixies thing in the late 80's and "discovering" them in '91 just as they were breaking up.

Just for clarification, as Bill Simmons would say about Rocky V or Caddyshack II, the recent "Pixies Reunion" never happened.

I am embarressed by the fact that I have the first Evanescence release and I find the singer-chick's voice...haunting.

I own (and listen to!) a single that packs just as much embarrassment as a full CD: Backstreet Boys' I Want It That Way.

There are albums that T'hous thinks I should be embarrassed of, but I don't turn them way down if a car pulls up next to me at a light: Les Miz, Pure Moods, James (anything).

But the same can't be said for my album (maybe two?) of power ballads. no there's no one home / in this car of shame

I saw Sleater Kinney in concert a few years back and it was a pretty rockin' time. I dig them. no shame involved.

I also happen to really dig the connells, TH, so I will give you a what-what on that too.

As for embarassing music I "own" (i.e. it resides on my iPod but I might/might not have paid for it), I am always suprised by how much I like that Gwen Stefani album in which she compares her fecal matter to bananas. Here's a good one: I used to WORSHIP Dave Matthews, whom I've seen in concert five times. Then, one day, I just got sick of it.

Then again, seeing as how you're arguing from a misogynist premise glazed with a thin coat of "ha ha it's funny because it's true," I guess it doesn't really matter what you leave out of the argument after that.

Jesus, you'd think no grrl had ever rioted, reading this shit.

And ORF, I'm so pleased to read that you the shackles of sonic oppression that is the Dave Matthews Band!

I rise with Sideshow to support ORF's breaking of the Dave Matthews habit. It is very hard to rock out to violins.

Also good to hear I'm not the only one who still listens to the Connells.

Perhaps the funniest thing ever written; however, there is a distinction in this difference. Bret Michaels, much like the Nelson twins and Dee Snyder, like to walk right up to the man/woman boundary. How many times have I aid "look at that babe!" only to realize that the "babe" in question is one of the Nelsons. Okay, that hasn't happened much since the mid-90s, but I've had a thing for long and blonde ever since.

Robotfriend, you're right that my humor sometimes falls so short of the mark as to be insulting. I think of this blog as a place to bone up on my writing skills (and bone I will!), and I obviously need more work on expressing sarcasm.

Thanks for the Wanda Jackson name - I had to look her up. Looks like she was big in the 50s and 60s, then became a Christian fundamentalist who did gospel for the next quarter century. Gospel singers do not rock, unless they renounce their gospelly ways and accept satan in their lives, like Axl Rose. (Better? Too anti-Christian?)

Finally, major ups for the "riot" allusion at the end of your comment. For those of you who tend not to rock properly, "riot" in this context derives from the band Quiet Riot, who's first guitarist was - wait for it - Randy Rhoads.

It is very hard to rock out to violins.

Now that he's past the makeup phase, Bret Michaels can just be the hot hot thing I knew he always was. Thank goodness for 80's/metal flashback shows! Work those pouty lips!! it's all fun and games

Besides, flutes are very manly. Clarinets are for wusses.