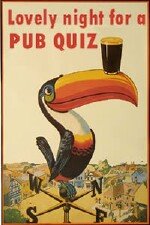 Courtesy of the Carpetbagger Report, I see that there's a bold new entry in the laziest, sloppiest subgenre of political punditry.

No, no, I'm not talking about the Zombie Corpse of Larry King. According to the authorities, he's been cornered in a farmhouse in southeastern Iowa and is now being fed a steady diet of softball Tammy Fae Bakker interviews and, of course, braaaaaaaiiiinnnnsssss.

Instead, the hacktacular trend I'm talking about the lazy Red States vs. Blue States sofa sociology that David Brooks thinks he excels at. I don't know about you folks, but I'm so looking forward to his next book, Red Staters are from Mars, Blue Staters are from the Clenis.

Well, look out, Brooksie, because there's a new village idiot in town! Actually, three village idiots! (Hey, all appearances to the contrary, this kind of crap doesn't just write itself.) The authors in question are Douglas B. Sosnik, a strategist in the Clinton White House; Matthew J. Dowd, a strategist for Bush's two presidential campaigns; and journalist Ron Fournier. This Broad Squad has put their heads together to come up with their new map to America's political divisions, which they've witlessly called Applebee's America.

In what may be their only correct point, the authors argue that the red state vs. blue state model isn't really accurate when you consider that many states are actually a blend of the two. So instead, they focus on individual people, trying to figure out what "tribe" different sorts of people are in. And those tribes, they argue, are largely determined by the gut-level consumer choices we all make.

As proof of their thesis, they offer a quick, twelve-question quiz for readers to take and thereby bask in the warm embrace of their predictive brilliance.

Well, I just took it, and I'm thrilled to report that, with my score of 11 out of 12, I'm apparently a hard-core conservative Republican. Who knew? I mean, I followed all the steps, but I didn't think the conversion had taken hold.

From the comments over at TCR, I can see that I'm not alone. (Host Steve Benen also scored a Nigel Tufnel eleven.) I'm curious to see the inner selves of my co-bloggers and the people who accidentally wind up here while looking to purchase a Fleshlight.

The quiz is really simple and fast. You can take it in less than a minute, which is probably more time than the authors spent crafting it.
Posted by Otto Man at Tuesday, July 25, 2006

Uh, I think I broke the quiz thingy. It gave me a gobbledygook string of nonsense, which also makes me think of Ann Coulter and Larry King.

I'll try it again later, but I have to know now: is there really someone in America that would choose Coors?

Wow, fleshlight reference. That takes me back.

Um, what does it say about me if I'm too cheap to buy bottled water?

Basically, I would have answered "none of the above" for about 75% of the questions.

Like when Marge's therapist tells Homer that she charges on a sliding scale, and Homer keeps telling her to keep sliding towards free. I was saying "keep sliding" to myself for most of those questions.

Dude. Seriously. This quiz is SO BLATANTLY tipped towards "conservative" (read: hick) choices. I have to choose between Monster Trucks or Pro Wrestling?? Really? Why not "a concert" or a "backyard beatdown?"

And Sam Adams is as much of a Domestic as Bud and Coors.

I propose some new answers they forgot to include:

-Extra dollar? Kodiak or a pack of smokes.
-Picnic with friends? Beer. Duh.
-Jackpot/vehicle choice? a GM product to support the unions.
-Subscription? Playboy.
-Groceries? the little local grocer with a great butcher.
-Cocktail Party? whatever hides roofies the best.
-brand of bottled water? The kind with fermented barley sugars in it.
-Domestic beer? from my local microbrew.
-Special event? Celebrity Deathmatch
-Internet history? P-O-R-N.
-Cable? Okay...Discovery here is good...but so is The Food Network. Oh please, Giada...keep kneading that dough....just... alittle...longer...
-They got me on "sporting event. College football.

Yeah, really. What the fuck? Dr. Pepper or Pepsi? Pro wrestling or monster trucks? What, are they too hoity-toity for a goddamned demolition derby?

However, I actually do choose Coors over Bud, light or otherwise. Not my first choice, but those brew shakes can't cure themselves.

I scored a "9" putting me solidly in the red. I'm not even sure how I could have "blued" up the results...Saab over the Audi perhaps? Jesus, what a joke.

Other questions in the extended quiz:

How do you like your robe and hood?
a) Light starch.
b) No starch.

You keep your handgun...
a) In your bedside drawer.
b) Under your pillow.

I scored a 6, which is a "true tipper." At first I thought they meant tipping at the restaurant, in which case I'd be more of a "give them enough so they don't think you're trash, but don't overdo it" kind of guy. But I guess they mean I could tip one way or the other. How . . . lame.

My guess is that the answers you give have no bearing on your score. The quiz simply launches a plugin that examines your internet history, compares it to data in the NSA databanks, and matches your stuff to the appropriate terrorist profile.

I'd really love to know what small body of pseudo-research and overheard dinner conversations led them to assign political leanings to these arbitrary consumer choices.

You can split any of these categories however you'd like. Is TV Guide "blue state" because it's all about dirty Hollywood, or "red state" because it contains viewing instructions for people who want to watch "According to Jim" but are too stupid to find it on their own?

Thrillhous may have the answer there. If so, I need to spend much less time at the Stormfront website.

This is cracking me up . . . and of course I'm waaaaaaaayyyy to goofy *and* egotistical to ignore the challenge. A few additional questions:

3. a. Travis Tritt
b. Alan Jackson

It's obvious, but it needs to be said:

Otto's 11:51 followed by Furious' 12:05 was a good enough one-two combo to take down your average middleweight.

a. Support our troops
b. Hate America

a. Thinker
b. Decider

I got a 7. That car question threw me. Are the quiz writers unaware of the Fix-Or-Repair-Daily vs. Chevy camps? Having some rural roots in a Very Red State, I can't shake the drive-only-American thing (T'hous prefers "quality"), but I wouldn't go so far as to devote myself to one brand. Now that's a rednecky thing to do.

The CBC election coverage had it right: red for Liberal, blue for Conservative.

So why are our Republicans mired in red?

Because it's ideologically logical? No. Traditionally, the color red has been associated with movements and parties of the left. There is nothing "left" about Republicans.

Because permanent redness will be as fair as the prior random color assignments? No. The two colors are not equally attractive, especially on the glare of a TV screen. The sky, reflected by the sea, is blue for good reason. On indoor backgrounds, TV programming overwhelmingly favors blue to red.

Because ABC, CBS, and NBC agreed to stick it to the Republicans? Agreement or not, stick yes. Was Fox culpable too, or was the new commitment to Republican redness imbedded into the political lexicon too swiftly and thoroughly for anybody to opt out?