Well, we're finally down to the Final Four in the World Cup, and I'm thrilled to see that Duke missed the cut. Suck it, Coach K!

It's an all-European group for the finals, with Portugal, France, Germany, and Italy all making it in. (Man, the Swiss have got to be pissed about all their neighbors going to the big dance. Or maybe not. They are Swiss, after all.) While sweeping the finals is going to make the Continent even more insufferable for the next few years, at least it's going to give us some phenomenal matchups in the coming days.

Here's what we've got: 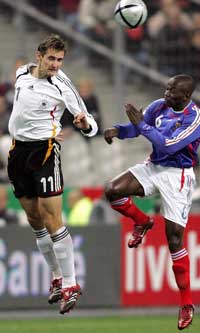 The Original Axis of Evil Reunion Tour: Germany vs. Italy
This contest will offer a little bit of nostalgia for those who enjoyed the grand collaborations between these countries in the late 1930s and early 1940s. I'm fine with seeing these two go at it, since it'll finally settle the bad blood from the Hitler-Mussolini break-up. But part of me is worried they're going to team up and go kick the crap out of the Czech team. Again. If they're smart, the fans in the Sudetenland are going to watch this game with the engine running.

On the merits, this should be a great game. The Germans specialize in swift strikes and have the talent to maintain the blitzkreig attack all game long. Klose, Podolski, and Neuville are brilliant up front, and Ballack and Frings do a great job supporting the attack. The Italians, despite their well-deserved reputations as the biggest prima donnas of the game, are defensive masters and can lock down a 1-0 lead with the best of them.

It should be a tough one, but the Germans have better chemistry and the huge home-field advantage. I think the Germans can pull it off. Hey, they lasted longer back in the '40s anyway. 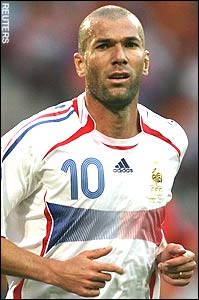 "I'm Gettin' Too Old for This Shit": France vs. Portugal
Neither team was expected to make it this far, with most observers guessing that the Portuguese would be sunk by the English and the French would get steamrolled by tournament favorites Brazil. Both pulled off upsets. The Portuguese benefitted from their own luck and England's stupidity, while the French simply outhustled the Brazilian squad.

Both teams have an aging star who's come out of retirement for one last big score. Portugal's Figo is a legend, but he's started to show signs of wear and tear. France's Zinedine Zidane not only has a cooler name, but a hell of a lot of gas left in his tank. He made the Brazilians look like a junior high team in the last game, and he shows no signs of slowing down. Plus, he's got a much stronger supporting cast, with Henry, Ribery, Sagnol, and Makalele adding some energy. Portugal, meanwhile, has a bunch of guys who remind me of a young Scott Baio.

Portugal has been riding a wave of lucky breaks to get this far, but I think that comes to an end here. France was so dominant in the game against Brazil that I've got to assume they're going to do likewise with the country that colonized Brazil too.

All things considered, I think it's going to be Germany and France in the final game, with the host country once again showing that it's Deutschland Über Alles!

While Germany has already won the Cup -- not once, not twice, but thrice! -- it's always been as "West Germany." This would be the first time since reunification. We can only hope they mark the occasion with a massive singalong to Peaches and Herb's classic ballad "Reunited."
Posted by Otto Man at Sunday, July 02, 2006

Or they could celebrate their victory by invading Poland, bombing Small cities in Spain, and "demonstrating their ethnic superiority" by throwing the members of the the other 31 teams in work camps.

Or they could just drink beer, eat sausage, and sunbathe nude in Ibiza. Who knows?

Stephen Colbert is right: Bears are the biggest threat facing us today.

I love the comment to your post. "Why pick on the Germans?" Yeah, what have they ever done?

Germany was striking like crazy, but somehow they just couldn't get many good shots off. And damn, Italy has a great goalie.

But that Italian goal (the first one) was something special. I'm glad it didn't go to penaly kicks.

I was rooting for the Germans, but yeah, very happy it didn't go to PKs.