"Oh, So They Have Internet on Computers Now!" 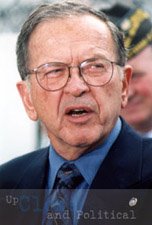 This is already all over the internets, but given our past fun with Sen. Ted Stevens -- the whiny old crank whom Thrillhous nicknamed Sen. Baby Made a Boom-Boom -- I thought we should pay attention to his latest little bit of insanity.

Anyway, here's Sen. Stevens explaining why he voted against net neutrality and, in the process, helpfully explaining the intricacies of the internet:

I just the other day got, an internet was sent by my staff at 10 o'clock in the morning on Friday and I just got it yesterday. Why?

Because it got tangled up with all these things going on the internet commercially.

So you want to talk about the consumer? Let's talk about you and me. We use this internet to communicate and we aren't using it for commercial purposes.

We aren't earning anything by going on that internet. Now I'm not saying you have to or you want to discriminate against those people [...]

The regulatory approach is wrong. Your approach is regulatory in the sense that it says "No one can charge anyone for massively invading this world of the internet". No, I'm not finished. I want people to understand my position, I'm not going to take a lot of time. [?]

They want to deliver vast amounts of information over the internet. And again, the internet is not something you just dump something on. It's not a truck.

It's a series of tubes.

Now we have a separate Department of Defense internet now, did you know that? Do you know why?

Because they have to have theirs delivered immediately. They can't afford getting delayed by other people.

Part of me finds the clueless old coot act hilarious, since it fills the void left by Sen. Strom Thurmond (R-Jurassic). (I remember one time when Thurmond actually instructed a witness to "speak into the machine." Not "the microphone," but "the machine".) But since Sen. Stevens is, you know, using his Magoo-like perception powers to craft ill-informed votes that'll affect our lives, maybe it's not so funny.
Posted by Otto Man at Monday, July 03, 2006

Mr Furious said...
This comment has been removed by a blog administrator.
6:35 PM

It's not a truck.

Well at least he got that part right. That said, net neutrality is doomed. Oy!

You can see the talking points the lobbyist gave him, but he doesn't quite understand how to connect the dots.

"So I tied an onion to my belt, which was the style at the time. Now to take the ferry cost a nickel, and in those days, nickels had pictures of bumblebees on them. Give me five bees for a quarter you'd say... Now where were we, oh ya...They didn't have white onions because of the war. The only thing you could get was those big yellow ones..."

Nice one, Furious. Grandpa Simpson was exactly who Stevens reminded me of.

But I've gone to the onion story too many times, and couldn't find anything suitable as a replacement. I nearly titled the post "Grover Cleveland Spanked Me on Two Non-Consecutive Occasions" but decided it was too obscure.

And yet we have to at least give him credit for not saying "Internets".

I had a way better comment than this one, but it got tangled up in those tubes. I am so signing up for that DoD internet. They've got their own tubes!

Hilarious. He thinks the Internet is like the pneumatic tubes at the bank's drive up window.

People over 35 should be barred from any vote that has anything to do with the Internet.