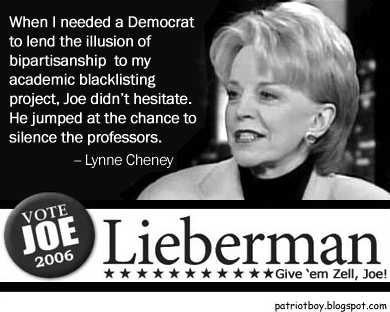 For those of you who are only now rousing yourself from a drunken and bloated Independence Day weekend coma -- you know who you are -- Joe Lieberman made an interesting announcement on Monday that he's going to run in the fall election whether he wins the Democratic Primary or not.

Well, it's an, um, interesting primary strategy to tell the very voters you're courting that they can go Cheney themselves, but that's our Holy Joe. His internal polling must show that Ned Lamont is kicking his sellout behind up and down the state. (And let's not forget that other Connecticut folks want to kick his ass too.)

Trying to salvage his chances for re-election, Lieberman is hoping to style himself a "petitioning Democrat" for the fall ballot. However, state electoral laws won't allow him to run under any variation of the party name if he doesn't get the nomination. Stupid democracy! (No idea what name he'll run under once he's done running from the Democratic Party. An Atrios commenter suggested that he run as a member of the Bullshit Moose Party. Sounds about right to me.)

In any case, tonight's primary debate between Lieberman and Lamont should be very interesting, to say the least. It's going to be carried live on C-Span at 7pm. (Yes, I realize that completely undercuts the above comment about it being interesting.)

Update: Just watched the debate. It certainly didn't fail to deliver on the fireworks.

Lamont's new to the political game, but he still landed a couple nice blows, ranging from a well-crafted opening statement -- "If you're not going to stand up to George Bush's failed agenda, I will" -- to a great off-the-cuff zinger when Lieberman kept interrupting -- "Hold on, sir. This isn't Fox News." He was a bit wobbly on illegal immigration, but made some great jabs on Iraq, the economy, and gas prices. Although a little wide-eyed, he seemed to be eager to get to work and get things done.

Lieberman, meanwhile, seemed to think it was a personal affront that he had to even be there. (Keith Olbermann just compared him to Crocker Jarvis, the incumbent senator in Robert Redford's The Candidate who acted much the same way.) In an interesting strategy, Lieberman alternated his tone between condescension, bullying condescension, and contemptuous condescension. Plus, he kept on borrowing debating tools from Republicans, mocking Lamont as a flip-flopper and invoking Reagan's "there you go again" comment on several occasions. Yeah, that's going to go over really well with Democratic primary voters.
Posted by Otto Man at Thursday, July 06, 2006

What a great testament to Democracy: Up Yours! I'm running whether you voted for me to run or not! Nya!

And I pulled myself out of the drunken haze yesterday, thank you very much.

I liked his line that he had bigger loyalties than his loyalty to the Democratic Party. Yeah, saving your own ass, Joe.

And I pulled myself out of the drunken haze yesterday, thank you very much.

Actually, I was referring to StudioDave, whose whereabouts are unknown. The last reports had him riding a half-emptied keg out to sea. He is presumed to be drunk and pantsless.

I prefer the phrase "in his cups," myself. Much more dignified, especially if you just threw up in your roomate's bed.

Ya know, we haven't heard much from StudD since he did the embedded reporter thing in that baptist gym locker room. Could he have converted?

By the way, thanks for the info on the debate. I was out painting "George Felix Allen Jr." on local overpasses.

Ya know, we haven't heard much from StudD since he did the embedded reporter thing in that baptist gym locker room. Could he have converted?

Maybe. He could've been hypnotized by that old man's swinging nutsack.

I'm pretty sure that's how they got Patty Hearst.

Maybe. He could've been hypnotized by that old man's swinging nutsack.

Lieberman's face was probably giving StudD flashbacks of the sack. Sending him back into a drunken haze.

I cannot believe I just typed that...