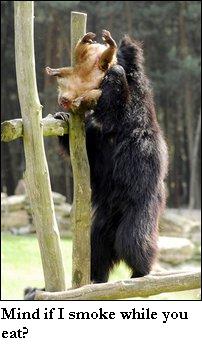 You know those Darwin Awards, where a dubious honor is sarcastically bestowed upon somebody who does something really really stupid? Looks like we're not the only primates who should be eligible to win:

Bears killed and ate a monkey in a Dutch zoo in front of horrified visitors, witnesses and the zoo said Monday. In the incident Sunday at the Beekse Bergen Safari Park, several Sloth bears chased the Barbary macaque into an electric fence, where it was stunned. It recovered and fled onto a wooden structure, where one bear pursued and mauled it to death.

Let's review: a MONKEY was chased and killed by a BEAR - a bear with SLOTH in its name. I looked up this bear on wikipedia, cuz a lot of times an animal's name is a misnomer (not so in the case of the urine monkey). I was half right. The bear is not slothful, but its dopey slow gait may have inspired the name. The sloth bear is nocturnal and eats insects. It is also the kind of bear used as dancing bears in circuses, and Baloo (Mowgli's animal-human hybrid guardian in The Jungle Book) was a sloth bear.

I looked up Barbary macaques too, just to make sure they weren't some kind of loser primate. Nope, they're small, smart, and fast, as comfortable climbing as they are walking.

So we've got a nocturnal, bug-eating bear chasing and killing a small, agile macaque. On a bright Sunday morning. Up among the wooden beams, the macaque's home turf. Darwin must be spinning in his grave.

Nothing the monkey could do...it was God's will...

I knew you were soft on law and order, Mr. F, but the laws of nature? You librul appeasers just keep sinking further.

Wait, so it's not the immigants and it really is the bears? It's going to take the biggest tax hike in history to pay for that Bear Patrol now.

On a semi-serious note, I hope this story makes its way to the Colbert Report Threatdown. "Bears" are generally at the top of his list, and this should ensure it.

Better not be any more taxes. Ever since I bought my home, this Homer tax has been killing me!

You clowns would be right at home with that crowd...lots of Simpsons-centric names. But they all pale to the all-time great team name...

Yes, much drinking and hilarity on Draft DAy.

Not surprisingly, my fantasy teams tend to be Simpsons-centered too.

But I once broke with the pattern for a team called the Sacramento Screaming Hemophiliacs.