"You Just Got Your Asses Kicked by a Bunch of Goddamned Nerds!" 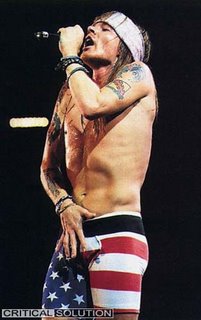 The midnight turf battle erupted when Axl moved Hilfiger's girlfriend's drink in the banquette area of The Plumm nightclub on West 14th Street - where the "Rent" actress was celebrating her 27th birthday. A densely packed crowd of celebs - including Lenny Kravitz and Kid Rock - had ringside seats to the battle.

The feisty fashionista was acting all gangsta, hitting Axl with a flurry of punches, one that landed under Rose's eye.

"First [Axl and Tommy] were sitting. Then they were pulling on each other . . . It got so out of control," said a shocked witness. As the punch-up escalated, Hilfiger introduced Rose to some "November Pain" with a blow to the cheek. Club guards quickly tried to separate the men.

"A bunch of security ran over - but Tommy would not back down. He was just out to take him down," the witness said. "Kid Rock got trampled by people running over. It was unbelievable."

Eventually, the designer's own bodyguard pulled him out of the club.

That's right. Notorious rock'n'fuckinroll tough guy Axl Rose got his ass kicked by a diminutive, well-groomed, 55-year-old fashion designer. That just may be funnier than the new Guns'n'Roses album.

The New York Post article is a little light on the facts -- it is the Post, after all -- so we have little information on the extent of Axl's injuries or the degree to which he wet all over his plaid pleated skirt during the ass-kicking he received. (Did I mention that said ass-kicking came from a diminutive, well-groomed, 55-year-old fashion designer? I did? OK.)

For some reason, this incident reminds me of my favorite bit of dialogue from I'm Gonna Git You, Sucka!

Keep whistlin', Axl. And welcome to the jungle, punk-ass bitch.
Posted by Otto Man at Tuesday, May 23, 2006

The only thing better than Axl Rose getting his ass kicked is Kid Rock getting trampled in the melee.

One report I read stated Hilfiger just repeatedly struck Rose in the arm. Probably his totally scar-tissued, dead-nerve heroin arm, so I'm not sure Rose knew what was happening...

I forgot all about "I'm Gonna Git You." That was a funny-ass movie...

Yeah, the Kid Rock trampling was a nice touch.

I only wish Hilfiger were gay. That would've been priceless to see a homophobe like Rose get pummelled by a gay fashion designer.

(Yes, I realize he may actually be gay. But the "girlfriend" comment in the article at least makes it seem he's in the closet, if he is. Which would be understandable. We all know how the fashion industry bars gay men from advancing.)

I can't believe I forgot that tune, Gramps. No, wait. I can.

That song used to crack me up. Strangely, it's gone missing from my iTunes. I must have had a mysterious attack of good taste.