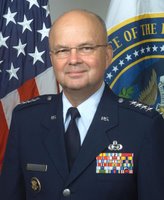 As the replacement for recently axed CIA Director Porter Goss -- a man who has the boorish manners of a Yalie -- President Bush is pushing General Michael Hayden.

Leaving aside the problematic matter of having the CIA firmly under the control of one of Rummy's men, there's also the small matter that Hayden has about as good a grip on the Constitution as Judge Smalls had on that pitching wedge in Caddyshack. Here's an exchange from earlier this year, in which Hayden -- then national director of the NSA -- lectured a reporter on the Fourth Amendment, getting it very very wrong.

QUESTION: Jonathan Landay with Knight Ridder. I'd like to stay on the same issue, and that had to do with the standard by which you use to target your wiretaps. I'm no lawyer, but my understanding is that the Fourth Amendment of the Constitution specifies that you must have probable cause to be able to do a search that does not violate an American's right against unlawful searches and seizures. Do you use --

GEN. HAYDEN: No, actually -- the Fourth Amendment actually protects all of us against unreasonable search and seizure.

GEN. HAYDEN: That's what it says.

QUESTION: But the measure is probable cause, I believe.

QUESTION: But does it not say probable --

GEN. HAYDEN: No. The amendment says --

And so what many people believe -- and I'd like you to respond to this -- is that what you've actually done is crafted a detour around the FISA court by creating a new standard of "reasonably believe" in place of probable cause because the FISA court will not give you a warrant based on reasonable belief, you have to show probable cause. Could you respond to that, please?

GEN. HAYDEN: Sure. I didn't craft the authorization. I am responding to a lawful order. All right? The attorney general has averred to the lawfulness of the order.

Just to be very clear -- and believe me, if there's any amendment to the Constitution that employees of the National Security Agency are familiar with, it's the Fourth. And it is a reasonableness standard in the Fourth Amendment. And so what you've raised to me -- and I'm not a lawyer, and don't want to become one -- what you've raised to me is, in terms of quoting the Fourth Amendment, is an issue of the Constitution. The constitutional standard is "reasonable." And we believe -- I am convinced that we are lawful because what it is we're doing is reasonable.

For the record, here's the Fourth Amendment:

The right of the people to be secure in their persons, houses, papers, and effects, against unreasonable searches and seizures, shall not be violated, and no Warrants shall issue, but upon probable cause, supported by Oath or affirmation, and particularly describing the place to be searched, and the persons or things to be seized.

Seriously, is there no one in this administration who doesn't exhibit their patented brand of ignorance and arrogance? Talk about message discipline.

Personally, I hope the Senate rejects this guy so he can get back to his current job.
Posted by Otto Man at Monday, May 08, 2006

I'm waiting for Barney to finally get a Cabinet post.

Changing the deck chairs on the H.M.S. Pinafore, thrillhous?

Seriously, I suspect Hayden was rattled by some intensive, somewhat adversarial questioning by a reporter with cojones. It's extremely rare for a general officer to be in that situation with anyone, reporter or whatever, pressing questions that way.

Which is to say, I suspect Hayden probably knew better than to deny probably cause figures into the Fourth Amendment.

Had it been Bush, I would have no trouble believing such appalling ignorance was for real. For the truth is, Hayden probably had to demonstrate far greater knowledge, competence and reliability to get to his high position than Bush did to become president. And that's not to mention the fact Hayden's career ascent didn't require a $200 million outlay for spin and hype.

This NPR report is the only real info I have on this, and it doesn't sound like the worst nomination Bush has made. And a dramatic improvement over Goss.

I have to do some independant research (ie: a headcount of screaming bloggers) before I make up my mind on this appointment.

My initial response is that a former general should not move across to the CIA. But considering who Bush could have appointed, Haydon doesn't seem to bad. At least he shouldn't be the rabid incompetent partisan that was Porter Goss.

Also Negroponte has tabbed one of the guys that Goss ran out to be Deputy. Seemingly as good thing.

Of course The Decider has called Hayden "supremely qualified" and has called for an immediate vote and confirmation reminding Congress they unanimously approved him for his current post... Somehow after Michael Brown, Harriett Myers and the failure that was Porter Goss, Bush's idea of supremely qualified falls slightly flat...

I'm worried about the fact that this move would seem to completely neuter the CIA and shelve all intelligence authority under the DoD. Hayden is one of Cheney and Rummy's men, and they've already maneuvered to have a lot of the foreign intel gathering done by Special Forces and not the CIA.

When you add in the fact that Hayden is a cheerleader for the NSA warrantless wiretapping and, as the post notes, seems to know dick-all about the legal restraints on domestic spying, searches and seizures, well, I'm not exactly sleeping the sleep of angels.

But most importantly -- I get nothing from you people for the Kurtwood Smith reference?