The People are Revolting 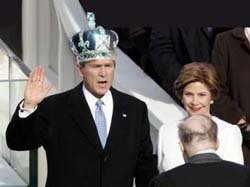 Of all the imperial bluster put forth by this president, perhaps nothing is so offensive as his attitude that he is above the law in every way. This unconstitutional attitude has been expressed both crudely (e.g., the "No, I'm the decider!" tantrum) and boldly (e.g., the claim that the Afghanistan war resolution meant the president could spy on Americans without warrants). But it's also been expressed quite routinely as well, in the many "signing statements" that the president has used to override the will of Congress and to subvert the constitutional process. When Emperor Bush doesn't like a law, he simply casts it aside.

Stories about this practice has been bubbling up for some time now, but the Boston Globe recently showed just how widespread it really was. Better late than never, the New York Times editors have weighed in as well:

President Bush doesn't bother with vetoes; he simply declares his intention not to enforce anything he dislikes. Charlie Savage at The Globe reported recently that Mr. Bush had issued more than 750 "presidential signing statements" declaring he wouldn't do what the laws required. Perhaps the most infamous was the one in which he stated that he did not really feel bound by the Congressional ban on the torture of prisoners.

In this area, as in so many others, Mr. Bush has decided not to take the open, forthright constitutional path. He signed some of the laws in question with great fanfare, then quietly registered his intention to ignore them. He placed his imperial vision of the presidency over the will of America's elected lawmakers. And as usual, the Republican majority in Congress simply looked the other way. ....

The founding fathers never conceived of anything like a signing statement. The idea was cooked up by Edwin Meese III, when he was the attorney general for Ronald Reagan, to expand presidential powers. He was helped by a young lawyer who was a true believer in the unitary presidency, a euphemism for an autocratic executive branch that ignores Congress and the courts. Unhappily, that lawyer, Samuel Alito Jr., is now on the Supreme Court. ....

Like many of Mr. Bush's other imperial excesses, this one serves no legitimate purpose. Congress is run by a solid and iron-fisted Republican majority. And there is actually a system for the president to object to a law: he vetoes it, and Congress then has a chance to override the veto with a two-thirds majority.

That process was good enough for 42 other presidents. But it has the disadvantage of leaving the chief executive bound by his oath of office to abide by the result. This president seems determined not to play by any rules other than the ones of his own making. And that includes the Constitution.

Well, there you have it. The president has declared himself the supreme arbiter of American laws. Furthermore, with the craven complicity of congressional Republicans, he's managed to neuter Congress and stock the courts with judges who agree that the president is, in fact, king.

And the media, meanwhile, is just starting to wake itself up. The Globe and NYT have started to come to, but the more-important TV media is still out to lunch. I've had CNN on this morning, and I must've seen a dozen segments on Patrick Kennedy getting away with an apparent DWI and not a damn thing on the president. (Apparently, it's only bad form if you ruin a security barrier. The Constitution? Have at it, your majesty.)

As Tristero notes over at Hullabaloo, this country may have just one more chance to correct its course, before we officially become a banana republic.

The 2006 elections are crucial - even in its weakened state, can the Bush administration and the Republicans maintain their vice grip (literally) on the government? If they can, it will become exceedingly difficult - next to impossible - for this country to reverse its tracks and recover. Even if Republicans do lose a house of Congress, it remains to be seen whether Democrats have the will, and the skill, to lead this country back from the abyss. The politics of national opposition to Bushism are exceedingly complex, as Kevin Phillips' book points out (that's an optimistic reading of it).

But I'm getting ahead of myself. These upcoming elections, let's return to them. Krugman has made the point over and over that there are so many crimes the Republican leadership has committed that they have a tremendous incentive to do whatever it takes to remain in power, if for no other reason than to avoid long incarceration. It is going to a long, ugly, expensive, and potentially dangerous summer for the United States. But it cannot be avoided and all of you need to vote, to get involved with campaigns you feel you can support (even if they are not perfect), and to get your friends and neighbors to go to the polls to vote these bastards out.

I couldn't agree more. If the Democrats can retake just one house of Congress this fall, then we might -- might -- be able to put the brakes on our rush to become a country where the president rules unchecked, our economy is crippled and laden with debt, and our foreign policy consists of "pre-emptively" nuking anyone who looks at us funny.

Get registered to vote, get involved in a local campaign, and get out your checkbook and start sending cash to the candidates who deserve it. Think you can't spare the time or money? Well, how much would you give to wake up in early November and see nonstop news coverage about a Democratic surge? Headlines about the American people's rejection of the GOP and endless pundit pieces on how badly the Bush administration has been crippled?

Thanks for the heads-up on the NYT editorial. I've pretty much stopped going to their site since the times select thing started, so it's good to know they occassionally do a good op-ed.

You're right, though, it won't matter, in terms of how most folks think about the admin, until it gets all over the TV.

I hope you're right. I really do.

But I have the feeling that the Dems can win all the midterms from here to the Rapture, and it won't make a whit of difference until we get someone with integrity in the White House.

Te Republicans like to say that Clinton sullied the Presidency, but any damage he did is microscopic compared to the immoral and soul-sickening things W has done.

Ugh, this is no way to start mt three day weekend. I'm going back to bed and declaring a do-over!

I can't wait until we get to hear people complaining about purient content on the nightly news again. Hookers and gambling, oh my!

A (female) commenter over at Balloon Juice has come up with the perfect name for the hooker scandal -- Twatergate.

So perfect, and so sad it'll never see the light of day in the news.