Keep On Rockin' in the Free World 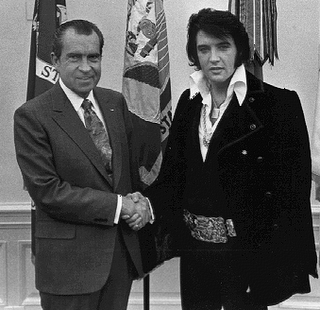 As part of their continuing effort to address the important issues of modern conservatism, like Jonah Goldberg's interpretations of "Star Trek" as an allegory for the war on Islamocooties, the National Review has compiled a list of the Top 50 Conservative Rock Songs.

In a sign of the importance of The List, it's been kept behind the NR's paywall, right along with Bill Buckley's recipe for his homemade Apple Brown Betty. But in the spirit of free enterprise, an aspiring blogger has done the free world a favor by posting the entire list.

Here are some highlights:

1. "Won't Get Fooled Again," by The Who.
The conservative movement is full of disillusioned revolutionaries; this could be their theme song, an oath that swears off naпve idealism once and for all. "There's nothing in the streets / Looks any different to me / And the slogans are replaced, by-the-bye... Meet the new boss / Same as the old boss." The instantly recognizable synthesizer intro, Pete Townshend's ringing guitar, Keith Moon's pounding drums, and Roger Daltrey's wailing vocals make this one of the most explosive rock anthems ever recorded -- the best number by a big band, and a classic for conservatives.

Given the NRO's past record of defining themselves according to classic Comedy Central fare like "South Park" and "Pardon My Zinger," I can only assume this selection is the opening salvo of a new argument for "CSI Conservatives." While the lyrics quoted above seem like a conservative critique of '60s street protest, there's the small matter of the part that's been elided: "And the party on the left / Is now the party on the right." In other words, it's a critique of the Vietnam-era Democrats from the left. Huh. I never knew there were so many conservatives in the antiwar movement.

3. "Sympathy for the Devil," by The Rolling Stones.
Don't be misled by the title; this song is The Screwtape Letters of rock. The devil is a tempter who leans hard on moral relativism -- he will try to make you think that "every cop is a criminal / And all the sinners saints." What's more, he is the sinister inspiration for the cruelties of Bolshevism: "I stuck around St. Petersburg / When I saw it was a time for a change / Killed the czar and his ministers / Anastasia screamed in vain."

And let's no forget the song's tribute to those classic conservatives, John F. Kennedy and Robert Kennedy: "I shouted out, 'Who killed the Kennedys?' / When after all, it was you and me." Maybe that's praise for Lee Harvey Oswald's support of Castro's Cuba?

4. "Sweet Home Alabama," by Lynyrd Skynyrd.
A tribute to the region of America that liberals love to loathe, taking a shot at Neil Young's Canadian arrogance along the way: "A Southern man don't need him around anyhow."

And a tribute to racist, standing-in-the-schoolhouse-door Governor George Wallace, too. Man, what a conservative hero!

12. "Neighborhood Bully," by Bob Dylan.
A pro-Israel song released in 1983, two years after the bombing of Iraq's nuclear reactor, this ironic number could be a theme song for the Bush Doctrine: "He destroyed a bomb factory, nobody was glad / The bombs were meant for him / He was supposed to feel bad / He's the neighborhood bully."

I'll give you a second to swallow the idea of Bob Dylan writing a top conservative rock song -- see also, the Sex Pistols, the Clash, David Bowie and CCR -- and move on to lyrics that seem to be describing a different country these days: "He got no allies to really speak of / What he gets he must pay for, he don't get it out of love / He buys obsolete weapons and he won't be denied / But no one sends flesh and blood to fight by his side/ He's the neighborhood bully."

18. "Cult of Personality," by Living Colour.
A hard-rocking critique of state power, whacking Mussolini, Stalin, and even JFK: "I exploit you, still you love me / I tell you one and one makes three / I'm the cult of personality."

Yes, yes, the cult of personality is solely a product of the Left. And anyone who says differently is clearly suffering from Irrational Bush Hatred.

24. "Der Kommissar," by After the Fire.
On the misery of East German life: "Don't turn around, uh-oh / Der Kommissar's in town, uh-oh / He's got the power / And you're so weak / And your frustration / Will not let you speak." Also a hit song for Falco, who wrote it.

Uhhh .... yeah. I guess they let Schwarzeneggar pick one.

32. "Keep Your Hands to Yourself," by The Georgia Satellites.
An outstanding vocal performance, with lyrics that affirm old-time sexual mores: "She said no huggy, no kissy until I get a wedding vow."

And President Bush got a pick, too, it seems.

34. "Godzilla," by Blue Oyster Cult.
A 1977 classic about a big green monster -- and more: "History shows again and again / How nature points up the folly of men."

First of all, where are the umlauts? And second, Godzilla is a cautionary tale about the dangers of nuclear war and the consequences of wreaking havoc on the environment. I thought those were the kinds of things that only concerned the touchy-queery liberals?

35. "Who'll Stop the Rain," by Creedence Clearwater Revival.
Written as an anti–Vietnam War song, this tune nevertheless is pessimistic about activism and takes a dim view of both Communism and liberalism: "Five-year plans and new deals, wrapped in golden chains..."

Again, conservatives seem to forget that it was once actually possible to critique liberalism from the left. As someone over at Pandagon noted, if thinking the government hasn't gone far enough left somehow makes me a conservative, well, there I am. I'll see you at the next National Review Cruise and Shuffleboard Hoedown, Jonah!

47. "One," by Creed.
Against racial preferences: "Society blind by color / Why hold down one to raise another / Discrimination now on both sides / Seeds of hate blossom further."

That may be the first time I've actually read a Creed lyric. I'm starting to think David Cross was right -- Scott Stapp apparently gets his ideas from the discarded poetry of eighth-grade schoolgirls.

There's plenty of more insanity over at the full list, so go check it out. There are some surprising omissions -- the title song of this post, for instance, and the entire body of work by the Nuge -- and some baffling inclusions. Did you know that Jesus Jones' "Right Here Right Now" is not only about the fall of communism but is also, in fact, a good rock song? Did you know that Led Zepplin's "Battle of Evermore" is also about communism? And David Bowie's "Heroes"? And, apparently, every song ever written in English? Well, it's true! The National Review said so, and when have they ever been wrong?

But like I said -- there's plenty of trainwreck here for us all to gawk at, so have a look and share your thoughts in the comments.

(Thanks to Pandagon for finding the link.)

Update: Apparently, the rush to bask in conservative rock has caused the original link to crash. I'm thankful that I was able to preserve some of the brilliance here, but like Oskar Schindler, I sincerely wish that I could've done more.
Posted by Otto Man at Monday, May 22, 2006

Dammit! Can't get the link to work. The good people at nro couldn't possibly be involved, could they?

I'm dying to know. Is "Girls Just Wanna Have Fun" on the list? How about that "My Humps" song? I love that one.

Neither one made it, Thrillhous. Sexual activity and women enjoying themselves are both strictly forbidden.

You'll be glad to know a Scorpions song made it. I can't remember what it was about, but I'm guessing it had something to do with communism.

Reminds me of some ad (and I cannot remember for what) used a snip od CCR's Fortunate son over a waving flag to imply something about patriotism...

Of course the whole rest of that song is an anti-war screed contrary to the message of the ad, but hey, who's counting...?

"Jesus Walks" it was a shoe-in before Kanye got all uppity.

"We don't have to take our clothes off" - Absitenence rawks! What, the singer was teh geh and died of AIDS? Berglefliggle! (See also "Like a Virgin")

"Don't Fear the Reaper" - Cheney thought it was about him, had to be talked down when it was explained that it's really about suicide.

"Mercedes-Benz" because who amongst us does not want to make amends for our friends' Porsches?

Reminds me of some ad (and I cannot remember for what) used a snip od CCR's Fortunate son over a waving flag to imply something about patriotism...

Ralph Lauren, I think. I nearly threw up when I saw that.

Yeah, it was jeans, wasn't it?

I didn't throw up, but I likely wanted to throw something at the tv.

I'll bet you a dollar that the Scorpions song was "Winds of Change." "Rock You Like a Hurricane" would just dredge up memories of governmental incompetence.

I think it was "Winds of Change" now that you mention it. Definitely wasn't anything Katrina related.

Nah, the LiveJournal guy just locked the post, either making it so only he could read it or so that only his friends could read it.

Yeah, when I started reading Otto's post, I knew Winds of Change had to be on the list. Or maybe this one.