"Immigants! I Knew It Was Them!" 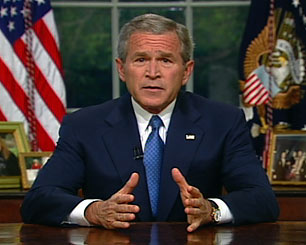 President Bush just took to the airwaves to address the current crisis in his poll numbers immigration and border security.

If you missed the address, it was a fairly predictable potpourri of proposals -- 6,000 National Guardsmen at the borders, a guest worker program (complete with national ID cards!), and a program that looks a lot like amnesty but is not, the Decider has decided, "amnesty." The surprising aspect was a proposal to crack down on employers who hire illegals. A nice touch, and one that the GOP business base is going to absolutely love.

While a lot of the attention will be put on the border deployment of the National Guard -- official motto: "We're Fightin' Them There and Here!" -- I think the guest worker program is the truly awful aspect of all this. Let's not forget that a guest worker program, with its effective establishment of a group of second-class citizens, is pretty much what led to all those French suburbs going up in flames a short while back. As someone else said, it's odd that Bush has finally found a French idea he wants to copy, and it's their worst idea ever. (OK, besides mimes.)

Ultimately, I think that will be the part of the program that sinks it all. Conservatives are going to hate the idea of allowing illegals any sort of legal status here, while liberals will -- or at least, should -- have qualms about creating a group of second-class citizens out of working-class minorities. We'll see soon enough.

In other news, it was nice to see Bush say that "We are a nation of laws, and we must enforce our laws." I'm assuming the next phrase -- "... as long as we're talkin' about you people and not me" -- was somehow cut off the teleprompter text.

Update: Some people have been complaining that the president gave his first domestic Oval Office address to discuss immigration reform, but made no reference to the growing concerns about the telephone eavesdropping program. Rest assured, the president devoted his weekly radio address to that very topic. Very impressive.

And, as proof that he's a triple threat when it comes to media, the president is now blogging. Check it out.
Posted by Otto Man at Monday, May 15, 2006

How come we never here the good news about importing a class of people to function as, at best, indentured servants?

Indeed. Digby just uncovered an interesting historical precedent that conservatives are urging us to follow in handling this new "underclass."

In other news, what's up with his hands in the photo? Was he soaking in a tub all day, or has he aged so much in the past year that he's got the old Monty Burns hands?

Man, those hands are freaky. He was probably down at the border doing some patrolling. Got to keep them Mexicans out, until we need them.

I think this speech is going to go down as a watershed moment for this Presidency...

The moment when even his casual base* looked at him and said:

"What is he talking about?"

"Is he serious? National Guard to defend against Mexico?"

"Anything about WMD from Tijuana?"

"Come on, you are really messing up the TiVo for my season finales."

He took a bad plan, and took it public in a big way. And I don't think it fooled anyone.

* By "casual base" I mean those who reflexively support the President, put magnets on the cars, etc, but don't pay close attention to everything. He unmasked himself to those people last night, and I think he is going to pay. Hopefully the Congressional Republicans pay right along with him.

This speech is not going over well with the conservatrons. Any bets on how low the next poll will go?

The next batch up should be ones that had him at 31-33% last time around, so I think we might just see a repeat of the 29% -- a new low for that particular poll, but a tie of the Harris one.

Of course, I'm more than happy to get proved wrong with a 25% approval.