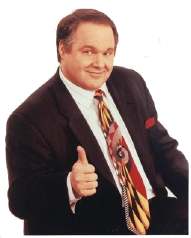 Looks like those damn dirty hippies aren't the only ones who engage in "situation ethics" and "moral relativism" anymore:

WEST PALM BEACH — Conservative king Rush Limbaugh opened his talk show Monday with an account of the agreement he struck with prosecutors and his quick trip to the Palm Beach County Jail Friday.

"There was no arrest. There were no handcuffs. There was no perp walk. There is no charge," said Limbaugh, trumpeting the message his public relations pros have telegraphed since Friday, that he was not arrested.
Rush

But according to the agreement, signed and finalized Monday, there is, of course, a charge: withholding information from a practitioner, doctor-shopping, a felony, hanging over his head.

And according to a jail official, Limbaugh's surrender on a warrant and his booking at the jail certainly is an arrest.

"It's all semantics," says Capt. Mark Chamberlain, a jail supervisor, about whether a person who surrenders can be called "arrested." "But it's definitely going to count in our booking statistics as an arrest."

In a nice touch of irony, you know Rush has got to be tangled up in knots over the announcement that Mexico is going to legalize drugs of all kinds. On the one hand, he hates those off-white people. On the other, he loves the drugs. What's a blowhard to do?

I'm guessing he would also say his breakup with the CNN lady was all his doing.

I think you're off on the Mexico drug quandry thing. The main reason guys like limbaugh want to curb immigration is so there will be enough workers in the drug fields. Everyone knows that part 1 of their plan is to build a 10-mile-high wall, but folks never read the fine print of part 2. That's where it says after you build the wall, you attach a bunch of narcotics processing shops to it. A small window in the wall allows drugs to be passed from the Mexican side to the Limbaugh side.

Wait...are you saying Rush has something to do with all my missing underwear?

True to form, Limbaugh is either woefully ignorant or flat out lying.

Technically, if a cop stops you for any reason in the course of doing his job, it's an arrest. He or she's detaining you from going about your business, even if it's only for a moment or two.

The cop doesn't have to pronounce you under arrest. No handcuffs, perp walk or booking is necessary. It doesn't mean you get taken downtown, etc.

In Limbaugh's case, if not sooner then when he showed up for booking, he was under arrest.