Courtesy of Daily Kos, a reminder that you should always wear protection: 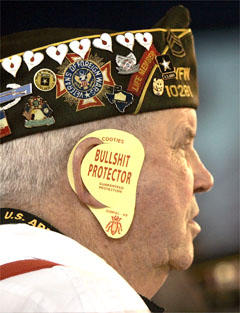 The photo ran alongside an article in Canada's National Post, with this caption:

While it's nice to see people waking up and appreciating the administration's frantic spin for what it is -- bullshit -- I think the American people should take a page from the administration's approach to sex education. A condom isn't enough. You have to abstain from listening to Bush's insanity entirely.
Posted by Otto Man at Tuesday, August 23, 2005

I would love -- love -- to hear about Shrub Cultists trying to stage-manage and handpick this audience.

Heh. Excellent point. I'm sure some squeaky Young Republican tried to have it removed and was given a response that involved the phrase "where the sun don't shine."

I think you misunderstand. A bull actually shit in this guy's ear once.

That must've been during Operation Toreador.