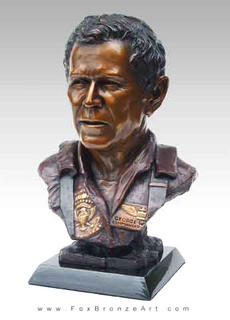 Say what you will about the Sheehan protest, but it does seem to be working, in that a lot of people have suddenly pulled back to reconsider the war in its entirety.

If you haven't read it yet, be sure to check out Frank Rich's brilliant op-ed from this weekend. The Editors of the Poor Man have a great contribution as well. And, a little more obscurely, is this post from the Liferaft of Love, with nice bits like this:

In fact, the entire run-up to the war was nothing but eight or nine months of degrading political theater. Speech after speech after speech, interview after interview after interview hyped the threat, warned of mushroom clouds over American cities, and turned Saddam into the next Tojo looking for a chance to unleash his swarm of balsa-wood gliders armed with canisters of nerve gas to poison Emporia, Kansas.

I didn't know George Allen was telling Bush to meet with Sheehan. Allen is always going along with the GOP majority. (as if he could be president...dream on...)

I just saw Paul Hackett last night. He is flying down to Texas today meet with Sheehan.

I was surprised by the Allen comments too, but I think he was confusing the names "Cindy Sheehan" and "Lindsay Lohan." He spent most of his formative years (that is, ages 10 to 40) surfing at Virginia Beach (where the waves are a manly 1 to 2 feet high), and I think he's still got some ocean in his ears.

Is George Allen really as stupid as he seems on TV?