I Call the Big One "Bitey" 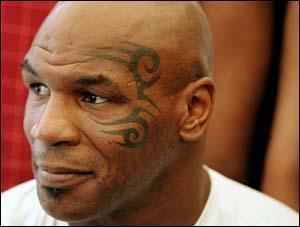 When Willie Nelson ran into tax problems a couple years back, he was forced to whore himself out and write some jingles for Taco Bell. Sad, but understandable. The amount of money he has to spend on ponytail braiding alone must be astronomical.

Now it seems Mike Tyson is in a similar bind. But Mike, being the straightforward thinker he always has been, has taken the phrase "whoring himself out" quite literally:

"Reality TV doesn't pay enough," said Tyson, who still owes millions to the IRS. "I need the money up front."

Be careful, Jenna. He took part of Holyfield's ear off, but there's no telling what he might sink his teeth into if he gets scared around you.
Posted by Otto Man at Monday, August 08, 2005

I know the dialogue is minimum in these movies ( or actually a friend told me once), but has anyone actually heard this man speak - he sounds like a pre-adolescent muppet girl. His voice is not very manly at all.

Excellent point about Tyson's little girl voice. That would be creepy.