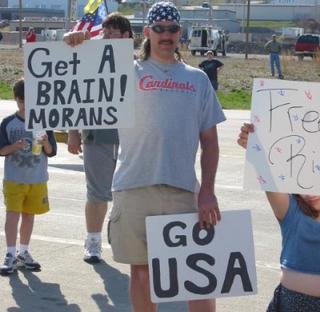 Naturally, the Cindy Sheehan protest outside the Neverland Ranch has brought out some reasoned rebuttals by those who support the war and the president's skilled prosecution of it.

For instance, consider the socratic method brought to the debate by this man:

CRAWFORD, Texas - A man fired a shotgun into the air as about 60 anti-war protesters held a religious service on the road to President Bush’s ranch.

Sheriff’s deputies and Secret Service agents in the area of the demonstration site Sunday rushed to the home of Larry Mattlage after the shots were fired but did not arrest him.

“I ain’t threatening nobody, and I ain’t pointing a gun at nobody,” Mattlage said. “This is Texas.”

Not to be left out of the salon discussions, another local man decided to offer a witty rejoinder of his own:

CRAWFORD, Texas (AP) - A pickup truck tore through rows of white crosses last night near President Bush's ranch, where a woman has been protesting the Iraq war.

The crosses stretched along the road at the Crawford, Texas, camp, bore the names of fallen U-S soldiers. No one was hurt. 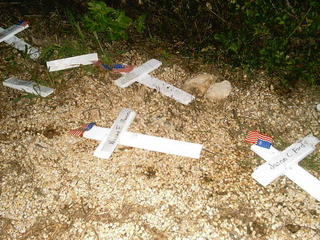 Right, if you want to express your opposition to an antiwar protest and make it clear you really, really support the troops, well, running over rows of white crosses with the names of dead soldiers is certainly a great way to get that point across.

In a nice coincidence, Norbizness reminds us that Texas is currently dead-last among all the states in high school graduation rates. To quote Texan legend Bill Hicks, "Who'd a thunk it?"

Is there a pattern here?

The pattern here is that for some people, the president can do no wrong. He could walk out there, kill Sheehan with his bare hands, and they'd all applaud his courage and determination.

The Presiden't men are just trying to ensure that Bush can have a restful vacation unsullied by the war that he started. How would you like to go on vacation and constantly be reminded that you are responsible for the deaths of thousands? Does that sound like the pursuit of happiness to you?

I don't know -- between the shotgun blasts and the runaway pickup trucks, it seems like there may be a war death on Bush's doorstep sometime soon.

Can't someone set a precedent in which they don't take long restful vacations while their underlings are in a war zone? It's just a little unseemly. Or a distraction from the now-dead story that is Rovegate.

Can't someone set a precedent in which they don't take long restful vacations while their underlings are in a war zone?

I have mixed feelings about this. Sure, he shouldn't be spending 20% of his presidency on vacation. But while he's there, his chances at screwing the country up even more are much smaller.

Does anyone else find the following non sequitor hysterical:
"I ain’t threatening nobody, and I ain’t pointing a gun at nobody," Mattlage said. "This is Texas."

It seems to me that the sheer fact it's Texas is inherently threatening given everyone's favorite original talking T-shirt statement: "Don't mess with Texas!"

Also, it turns out that guy's cousin has invited Sheehan and friends to set up camp on his property which is even nearer the Bush ranch.

That's going to be one awkward Thanksgiving dinner. I sure hope the Cowboys play well, or it'll get ugly.