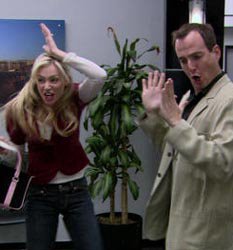 For those of you who've been monitoring the "Arrested Development" Deathwatch and hoping for a stay of execution, here's the latest news: Showtime is officially in negotiations to pick up the show, but hasn't yet made an offer.

I'm sure Showtime realizes that the dysfunctional cast of "Arrested Development" is a perfect fit for their channel. Showtime is already the home to pot-dealing suburbanites and hot terrorist action, so a show which features an uncle scoring weed for his 15-year-old nephew and a father building homes for Saddam Hussein should be right up their alley. I'm sure they're worried that the show's all-star cast might be too expensive for them, but I hope they're smart enough to take the risk.

I would definately buy Showtime for this show.

I don't think you have to buy the company. You can just subscribe to their services for $10 or so.

GOB's chicken dance may be the funniest thing since Booger Armstrong snorted snow in Better Off Dead.

I got hooked on Weeds when I signed up for cable and was given a 3-month promotional period during which I got all the movie channels for free. Since that period ended, I have been having an internal debate concerning the merits of paying for Showtime when the new season starts. If they pick up AD, it will be a done deal.