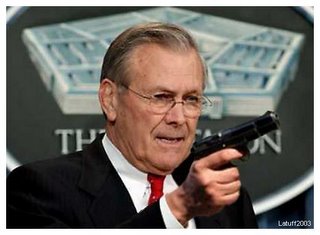 Secretary of Defense Don Rumsfeld asked for a thorough study of the Army's strength levels. When he didn't like the report, he took his job title too seriously and got all defensive:

Defense Secretary Donald Rumsfeld on Wednesday rejected two new reports - including one ordered by his own office - warning that the Iraq war has strained the Army to the breaking point.

In an "interim assessment" of the Iraq war commissioned by the Office of the Secretary Defense, former Army officer Andrew Krepinevich said the strain of keeping large numbers of troops in Iraq and Afghanistan has reduced the Army to a "thin green line."

Recruiting shortfalls the Army suffered last year and potential problems in getting soldiers with families to re-enlist because of repeat rotations to Iraq put the Army "in a race against time" to bring troops home "or risk `breaking' the force," Krepinevich wrote.

"Serious retention problems have yet to materialize," Krepinevich said, "but there are storm clouds on the horizon. For one, Army divorce rates are up sharply, an indication that repeated deployments are placing severe strains on military families."

Rumsfeld said he hadn't read the 136-page report but "it's clear that those comments do not reflect the current situation. They are either out of date or just misdirected."

He didn't even read it? A report that he commissioned himself, a report that cost more than an eighth of a million dollars and took a year to compile? Right into the circular file.

We all knew that the president doesn't like reading -- so much so that at his campaign appearances, they have to repeat one key phrase over and over again on the backdrops, just so he can maintain focus. But I guess we assumed that if Bush wasn't reading up on the pesky details, then at least his Cabinet members were.

Yes, yes, Condi Rice couldn't be bothered to read the entire 86-page National Intelligence Estimate on Iraq. But I guess we were hoping she'd be the exception to the rule.

But wait, that's not the worst part:

He added that the Army exceeded its goal for retention - the number of soldiers re-enlisting and officers extending their commissions - in fiscal 2005, which ended Sept. 30.

"The force is not broken," Rumsfeld declared. Moreover, he said, "It's battle-hardened. It's not a peacetime force that has been in barracks or garrisons."

It's a sign of the respect that journalists have for Don Rumsfeld that they put two entire lines of text between his lie about reaching the recruitment goal and the facts that so easily refute it.

Of course, the reporter manages to get in a nice point here at the end:

As for Krepinevich's warning that retention problems could emerge if the pace of rotations fails to ease, Rumsfeld said he didn't know if that was the case.

"I suspect the people writing these things don't know, either, because I suspect that they don't have any more insight than the other people around here do," he said.

Asked why the Pentagon pays consultants such as Krepinevich for such reports if they lack insight, Rumsfeld said: "Well, because the way you get the best knowledge and the best perspective is to listen to people with different views."

Except, of course, when you dismiss their findings without even reading the report. Then it just seems like you're once again sticking your head in the sand and pissing money away at the same time.

You just don't get it. Rumsfeld is so brilliant that he could tell just from the wording of the title page that the report was useless. If we didn't have this kind of confident, steely resolve in our leadership, we never would've ended up in a protracted urban war in Iraq. And who would've wanted that?

You may have a point. By just reading the titles of reports -- like, oh, "Bin Laden Determined to Attack inside the U.S." -- the administration is more than capable of getting things right.

He may not have read it, but he could definitely slice through it with his Razor Palm Attack.

Reading is a grossly overated part of understanding. That is why, if you were Christian, you could look into someone's heart. Like Putin.

But does his position really surprise anyone? For him to admit that the "thin green line" is about to break is almost the same as saying that the terrorists are winning. As bat-s$it crazy as I beleive the terrorists are, I don't think they really ever expected to match body counts or gain as much land. Theirs is a war of attrition and they know it. I'm not saying that this news should have been surpressed, but I can see how this would be percieved as a great boost to the spirits of those fighting US troops. So in his own twisted way, I can imagine Rumsfield actually believe that he is helping our troops by casting doubts and dismissing this paper.

Tj makes a good point. There are things a defense secretary doesn't admit. Acknowledging that you, your president and his merry band of unindicted co-conspirators have so mismanaged everything that the U.S. Army is in jeopardy of breaking, maybe other services, too, is to tip over the first in a series of dominos.

Not only would doing that encourage the insurgents to increase their aggressiveness, on the slight chance they're not at maximum tilt now, but it begs questions Rumsfeld and the rest don't want to have to dodge, weave and lie their way out of. At least, not if they can avoid having to do that.

1, Isn't it obvious you've drastically underestimated the force size needed in Iraq ever since Gen. Shinseki was cashiered?

2, Shouldn't overall military manning have been increased substantially by now, since it's become clear we not only face a greater-than-expected need in Iraq, but there's also these problems with North Korea and Iran that seem to be getting worse by the month? To put it in slightly different terms, by cheapskating on force size to the point where the Army's getting ragged and rundown, might you be tempting the North Koreans and Iranians to try something?

3, Since you've been running the war off budget while wearing out equipment and drawing down expendables that will have to be replaced, plus increasing re-enlistment bonuses like a meth-crazed cable game show host, do you think maybe it would make sense to broach the idea of a 10 percent income tax surcharge to help defray war expenses? Or do you suppose Rove would crap his pants right in the middle of a Cabinet meeting at the thought of how that would play with the voting/taxpaying public?

Concerning hiring consultants to do studies, then ignoring them.

The medium-size city I call home spent the better part of 20 years making a racket of hiring mostly out-of-state consultants to study all sorts of things. That is, all sorts of things our city council members could've and should've put some time and effort into finding out and figuring out for themselves.

That particular bad habit helped the city acheive its current state of fiscal deep s--t. Just this week, programs to provide medical care homeless and other children in poverty, and provide meals and daytime assistance to homebound old folks were torpedoed because they failed to dot every "i" and cross every "t" in their application, supposedly. The real reason is that the city desperate for ways to cut the budget.

I can well understand hiring a consultant with great savvy in some complicated, highly specialized area. But for years our councilduds persisted in hiring consultants to consider some pretty pedestrian/common-sense matters. It didn't take Sherlock Holmes to deduce they were largely engaging in COYA nonsense on the public's dime.

In D.C., I think there's a fair amount of that going on at any given time. But even more, I think it's a way for people with budget authority to toss bon bons to favored folk.

In the case of that $137,000 Army study, I have a hunch a colonel-level personnel officer and an E-7- or E-8 -level supply NCO, both already on the payroll, could've collaborated to produce a plenty good enough set of findings, all of it reported in 10 pages or less.

Of course, some assistant secretary-level swivel-chair crusader at the Pentagon would be hard put to justify his sumptuous salary if he'd just assigned the job to a colonel and a chief. Too declasse.

As somefolks might say "Leave the report, take the cannoli"

Nice one, Pooh. I love that site.