You're Making My Tombstone!!! 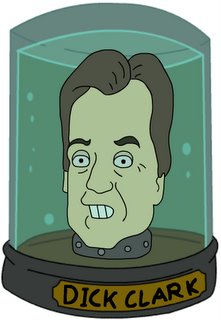 The show must go on. And so it did as "Dick Clark's Rocking New Year" counted down to 2006 as it has since 1972. But this year was particularly interesting television as Dick Clark had suffered a stroke and although he had not been publicly seen since the stroke, he still was going to host it.

Would the "eternal teenager" look none the worse for wear? Would we be able to detect any of the paralysis that follows a stroke? Would he pull a no show?

What we saw was amazing television. All of the Clark pieces were pre-recorded and "seamlessly" spliced into the mind-numbing, time-killing witty banter from Times Square. His speech was very slurred. His right arm didn't move. He was gray haired. He simply sounded old. Very old, like the years he had fought so hard to put off, caught up with a vengeance. The fact that these were pre-recorded pieces and this was the best of Clark they could present, spoke volumes as to how tough this year had been on Clark.

The impact on the viewer was profound. It was sobering to see a palpable reminder that we are all growing older. As much as New Year's marks the opportunity to start anew with better habits and noble goals, Clark reminded us that one day the curtain will fall.

Now, did ABC really need to remind us of all these profound and fairly depressing issues? I don't think I needed it. Do I think the elderly need to be locked in elderly homes and forgotten? Of course not, I just don't think confronting your mortality is really the way I like to "get my swerve on."
Posted by Studiodave at Sunday, January 01, 2006

I flipped over to this a couple minutes before the ball drop and was stunned that they had Clark on the mike. Yes, he's an institution and deserved some respect, but I think the respectful thing to do would be to give us the memories of him at his prime and leave it at that. He may have wanted to do it, but his friends on the show should've overridden him.

I saw Dick Clark in a hotel lobby in London a year ago, and I was amazed at how young he really looked in person. The drop-off between then and now is stunning.

Agreed. Worse than a ball player that plays one season too many and embarrasses himself, somebody should have had the decency or discretion to put the brakes on this one.

I didn't watch any of it, so I' not sure how bad it was, or how much screentime he had, but it should have been hosted by somebody else with a brief pre-taped "appearence" by Clark.

Ease him out. I can understand not doing some highlight reel/memories thing—too Oscars posthumous-feeling, but don't let him go down in flames...

I respectfully disagree. Reading these comments, I'm reminded of a couple of people who grew older and had problems.

One was Franklin Roosevelt. He had polio to begin with. He became president at a time of unprecedented challenges, and they took a toll, as did aging. That fourth term was a killer, literally, but the country needed him, and he was a trouper.

The other was a wonderfully talented guy who came to a tragic end much too soon: Rick Nelson. Specifically, I'm reminded of his "Garden Party" song.

He wrote it as a comeback after one too many exposures to audiences that expected him to sing "Travelin' Man," "Poor Little Fool," "It's Up To You" and his other early hits, and showed displeasure when he performed new material in different ways.

Nelson wanted to tell them, Look, people, that was then, this is now. I've moved on, grown, aged and developed, just like you, just like everyone. Let it be.

I've always thought it likely his drug use and untimely death came about because people didn't want to get it. And Nelson, for his part, couldn't handle being relegated to golden-oldie status before he was even 40.

Was Clark a pathetic character clinging to celebrity and the chance to be in front of a national audience one more time? Or, was he a trouper determined come back and do what he could do, as best he could do it? Two sides of the same coin, perhaps.

There are many good people in this country doing the best they can despite injuries, illness and having grown old. The entertainment industry,the media and advertising inundate us with the young, attractive and cool — maybe so much so that real people who don't quite make it in any of those categories somehow seem grotesque or pathetic when broadcast to us on the small screen.

It seems to me that if there was anything wrong with Clark's brief appearance on that New Year's Eve show, it resided not in him, but in the eyes of the beholder. I hope the fact he was on there brought some encouragement to others recovering from a stroke or other disability.

I was spinning my opinion off of what I read from others (here and elsewhere). So, perhaps I should have just STFU, since I don't really care too much about this, nor did I actually see any of it.

Consider my judgement on Clark officially reserved. Not reversed, but reserved.

swa -- very nicely put... and studioD, face it, your ass is toast just like the rest of us, so quit hiding behind the hazy wall of drugs and deception pathetically doled out by the media - you don't look like Brad Pitt (never have, never will) and you cannot get Jessica Alba (ditto).....that said, it was hard to watch parts of Dick's big send-off (hey look, i suck too!) but it's been his show for years (plus he's the producer yo), and I'm guessing it stood as a singular goal in his personal recovery process so kudos to him, I hope he leaves this mortal coil a happy and fulfilled person, the same I wish for you all (just some sooner than later...)

Why are you people avoiding me? Does my withered face remind you of the grim specter of Death?

You have a point, s.w.a., but I have to stand by my first comment.

I'm not saying the elderly have no place in the world and can't do great things late in life. I'm saying that when your job is to speak clearly, lift people's spirits, and count down to ten on a dime -- and you can't do any of those things -- then maybe you should step aside. At least for this year.

Plenty of people rehab from strokes and regain their speech and motor control, and Clark could've worked towards that and made a comeback. But as someone who watched it live can say, this was much too soon.

I haven't watched the Clark thing in years. The wife and I like to watch the most genuine expression of new years cheer that you can find on television: the Home Shopping Network countdown. Up to about 30 seconds before the drop, they're selling clocks. Then everyone who works on the set runs out and hugs each other and forms a big line of people to simulate solidarity or something. The screen splits to show the ball dropping on one side and the forces smiles of the HSN drones on the other. As soon as the ball finishes they start selling fitness equipment to all those new years resolutioners.

That's quite a tradition you've got there. I can't believe you've kept that to yourself all these years. Greedy bastards.

That is AWESOME! I'm looking forward to next year already.

The elderly don't need our attention and compassion, they need to be isolated and studied soit can be determined what nutrients they have that we can extract for our personal use.

And I'm not quite sure how one can prepare the important life and accomplishments of FDR to what Dick Clark does...Couldn't a trained parrot do his job?

but could a trained parrot look so ....Mahhhvelous! ... well, yeah, at this point probably....