I don't read Fafblog too often, largely because the green-background-and-purple-font layout makes my eyes bleed. But I should. And you should, too, because it's damn funny. 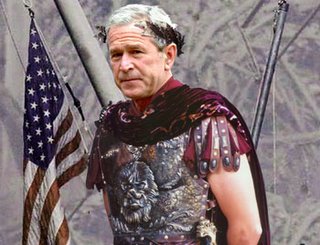 Check out the recent Q&A they provided on the omnipotence of Our Lord and Ruler King George IV:

Q. ... Now some crazy people say the president broke some silly old laws like FISA and the National Security Act and the Fourth Amendment. Are these crazy people crazy?

A. They sure are! Maybe those laws worked back in 1978 back when Leonid Brezhnev was snortin coke with Ayatollah Khomeini and groovin' to the hits of the Bee Gees, but in today's dark and dangerous times they just aren't enough.

Q. Things sure have changed since the innocent days of mutually assured destruction! But is it legal for the president to ignore the law?

A. Maybe not according to plain ol stupid ol regular law, but we're at war! You don't go to war with regular laws, which are made outta red tape and bureaucracy and Neville Chamberlain. You go to war with great big strapping War Laws made outta tanks and cold hard steel and the American Fightin Man and WAR, KABOOOOOOM!

Q. How does a War Bill become a War Law?

Q. See it's the checks and balances that make all the difference in our democratic system.

(Thanks to the presumably colorblind Kung Fu Monkey for catching this post, and to firedoglake for the lovely photo of President Bush. He really does love to play military dress-up, doesn't he?)
Posted by Otto Man at Monday, January 30, 2006

Yep, that captures the superbulousness of Fearless Leader's approach, all right.

Except it's almost too true to be funny. The more I watch this guy, the more I'm impressed with how much our supposedly great democratizer has in common with the approach of those hamfisted boneheads who ran the Soviet Union into the ground.

I read that as "hamsterized" boneheads. Which makes sense in an oblique sort of way.

I think "hamsterized" only refers to whoever it was that Jeff Gannon was meeting late at night.