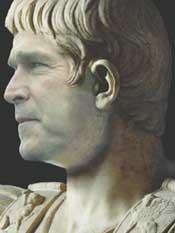 Assuming that he doesn't dissolve Congress and install his dog Barney as High Chancellor between now and tonight, Our Lord and Ruler King George IV is scheduled to give his State of the Monarchy address to his loyal subjects this evening.

Personally, I tend to prefer the president in more informal settings. When he's out on the stump, speaking to a carefully pre-selected crowd of adoring fans in a hermetically-sealed environment, he tends to relax and fall into his patented I-Think-You're-Retarded speaking style. You know, the one where he repeats the same statement over and over again with just the smallest grammatical variations? ("I'm a problem solver. In other words, I solve problems. There's a problem, see, and I solve it.")

Sure, there are some weaknesses in that approach. There's always an awkward silence when the president removes his coat and dress shoes and puts on his colorful sneakers and sweater, before heading off to consult with his counterpart, King Friday of the Land of Make Believe. But the appearance of the magic trolley helps dispel that.

The formal structure of the congressional address lends itself to a completely different style. Unlike the circle-of-trust rallies that Bush holds to make himself feel better, these audiences contain actual, certified Democrats and, as a result, the president gets a little skittish. He falls out of his comfort zone and has to rely on a different approach altogether.

All evidence to the contrary, the president will begin by declaring that "the state of our union is strong." The body of the speech will consist of variations on six or seven phrases, and at least three of those will be the word "freedom." There will be a couple shout-outs to his homies in the crowd -- Mrs. Alito, in tears; an Iraqi woman, in tears; the Constitution, in shreds; etc. -- and standing ovations from the GOP robots every time he manages to get through a sentence without swallowing his tongue.

Even though I know all this will happen, I keep watching the State of the Union addresses for one reason -- I know there's a slim, slim chance that some enterprising young computer hacker, whacked out on Cheetos and Mountain Dew in his mom's basement, is going to figure out a way to hack into the TelePrompTer. Will the hacker replace the text with, say, a Letter to Penthouse, and trust that President Ron Burgundy will simply read along? Or will the hacker just let the screen go dark, and thereby ensure that a slowly spreading circle of darkness also appears in the president's codpiece zone? Either way, hilarity will ensue.

Please drop your own hopes, fears, and over/under predictions about the State of the Union in the comments below. We can get through this together, people.
Posted by Otto Man at Tuesday, January 31, 2006

I have one prediction that I consider my lock of the week: I will not be watching.

I don't think the hacker thing would work. Even if the hacker could somehow disable the hidden earpiece, Cheney would just mutter the words for Bush to repeat.

I predict that he will utter something like the "Bring it on" in response to the recent Bin Laden tapes - without using that phrase of course.

I bet he'll use the death of Coretta Scott King to insist that MLK would've loved the idea of Health Savings Accounts and the upcoming War in Iran.

I've been feeling nauseous all day and since I know I'm not pregnant, it can only be the impending speech that is causing it.

To enjoy this evening's rousing speech of victory over terror, insurrectionists in their last throes, the 5,000,000 deaths of 'Al Queda's #2 man' and other such glorious statements of unification, I will be enjoying a Dogfish Head Brewery's World Wide Stout.

This is for 4 reasons:

1) This is actually a Russian Imperial Stout. It just seems fitting that as Julius Bush trumpets the victorious nature of our Vast Empire, that I should drink something of an Imperial Nature;

2) It is a World Wide Stout, and thus is reflective of the greatness of our Vast Empire of Victory;

3) It has the consistency of 10-weight motor oil. Oil is, as you recall, the basis behind our Vst Empire of Greatness; and

Sounds like the perfect drink for the speech, Smitty.

But be careful about taking any of the SOTU drinking games seriously. If you really take a drink every time he invokes "freedom" or "9/11", you'd be dead on the floor within a half hour.

I just had to bust out an umlaut for the word verification thingy. What the hell?

I love how my autofill wants to fill it in some of the time...

Over/under on misleading straw man references such as "Some people say..."

Over/under on misleading straw man references such as "Some people say..." 11

Oooh, that's a good one. Just once I want a reporter to respond to that with a simple "Who? Who says that?"