State of the Soundbites 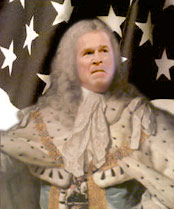 The White House press office has just released the soundbites from tonight's State of the Monarchy address.

In case there's something else you'd rather be doing than listen to the same presidential rhetoric for the millionth time, here are the stirring pieces of rhetoric that the White House thinks are the best parts of the speech, with my rapier wit providing some preliminary commentary.

Take it away, Your Highness:

"In this decisive year, you and I will make choices that determine both the future and the character of our country. We will choose to act confidently in pursuing the enemies of freedom - or retreat from our duties in the hope of an easier life."

As we all know, the leaders of this administration would never ever retreat from their duties in the hope of an easier life. No matter how many "other priorities" they might have, no matter how much they'd rather be in Alabama instead of Texas, they will not cut and run! Well, they won't do it anymore, that is.

The President will talk about America's leadership role in the world, and the importance of working together to better protect our country, support our troops, and advance freedom:

"Abroad, our Nation is committed to an historic, long-term goal - we seek the end of tyranny in our world... the future security of America depends on it."

However, because of the laws of tyranny-dynamics, the destruction of tyranny elsewhere must lead to the creation of tyranny at home. They're not spying on your phone calls, snooping on your internet records, shuttling protestors into Orwellian "free speech zones," detaining people in Gitmo for years on end, and torturing whenever they can because they want to do all that. Oh, no. They have to do all that to maintain the cosmic tyranny balance. Call it the backwash of freedom.

"In a time of testing, we cannot find security by abandoning our commitments and retreating within our borders. If we were to leave these vicious attackers alone, they would not leave us alone. They would simply move the battlefield to our own shores."

And anyone who would point to the Madrid train bombing or the terrorist strikes against the London Underground as proof that this simplistic fightin'-'em-there-so-we-don't-have-to-fight-'em-here argument is pathetic and laughable, well, those people hate America. And Jesus.

"...Ultimately, the only way to defeat the terrorists is to defeat their dark vision of hatred and fear by offering the hopeful alternative of political freedom and peaceful change."

A hopeful alternative coming to a war theater near you, in the form of cluster bombs and nipple clamps. Remember: They'll love us if we just hurt them enough.

To keep America competitive in a dynamic economy, the President will set out an agenda focused on the priorities that families are most concerned about. He will talk about the importance of having an educated, skilled workforce, reducing our dependence on foreign oil, and making health care more affordable, accessible, and portable.

And I'm sure he'll have as much success in pushing through those SOTU promises as he did with past promises to privatize Social Security, overhaul the tax code, send Americans to the moon and Mars, and catch that Osama bin Laden fellow.

"The American economy is pre-eminent - but we cannot afford to be complacent. In a dynamic world economy, we are seeing new competitors like China and India."

"We must continue to lead the world in human talent and creativity. Our greatest advantage in the world has always been our educated, hard-working, ambitious people - and we are going to keep that edge."

Yes, the new Republican education program with its lesson plans drawn directly from the Book of Leviticus and old episodes of "Davey and Goliath" will certainly keep America on pace with the godless Chinese and the heathen Indians who put their trust in science and technology instead of the Lord Almighty.

And the White House's policy of crushing all scientific research which does not adhere to the One Truth of the Republican Party will make sure that our scientists remain focused on the important issues of the 19th century, like evolution and the latest advancements in steam power.

"America is addicted to oil, which is often imported from unstable parts of the world... The best way to break this addiction is through technology."

Yes, technology like the Abrams tank and the Stealth Bomber.

"Our government has a responsibility to help provide health care for the poor and the elderly, and we are meeting that responsibility. For all Americans, we must confront the rising cost of care ... strengthen the doctor-patient relationship ... and help people afford the insurance coverage they need."

Finally, the President will speak to the character and compassion of America: "...our greatness is not measured in power or luxuries, but by who we are and how we treat one another. So we strive to be a compassionate, decent, hopeful society."

Except, of course, for the homos. They're going to burn in hell.

(Thanks to Daily Kos for posting the preview.)
Posted by Otto Man at Tuesday, January 31, 2006

The backwash of freedom. You're killing me, man.

Thank you, thank you. I'll be here all week.

Be good to your waitresses, people!