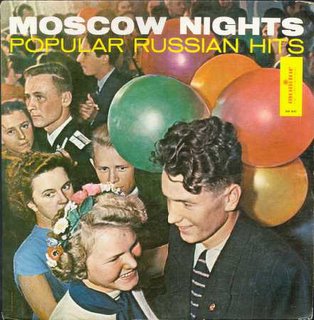 "Popular Russian Hits"? For some reason, that reminds me of the moment in Airplane! where the passenger asks for some light reading, and the stewardess offers up a leaflet titled "Famous Jewish Sports Legends."

Seriously, if these are popular hits, someone should get Lenin's corpse off the dance floor. The look of coma-inducing ecstacy on these hip, happenin' Muscovites' faces is amazing. The only ones who even seems to be within striking distance of a smile are the couple up front, and I'm pretty sure they're sharing a laugh over the drowned lemur on that guy's head.

Anyway, the appearance of Soviet Bandstand here at LLatPoN can only mean one thing -- it's time for the Friday Random Ten.

For those of you who are joining us for the first time or, like iRod, have the reading retention skills of a kindergartner with ADD, here's how you play: Take out your iPod or iWhatever, set it on Random, and give us the first ten songs that pop up. (Hence the name, "Friday Random Ten." Get it? OK, it's Friday, too. Get it now?)

As always, if those of you at home would like to play the advanced version, throw in a Coolness Self-Audit as well. (Check out last week's FRT for a friendly guide to that. Or don't. See if I care.)

1. Billy Paul, "Am I Black Enough For You?" -- Some classic Philadelphia Sound soul from the early '70s. While Paul is probably best known for "Me & Mrs. Jones," this is actually a much better tune. It starts with a scorching organ intro that sounds like it should've been on Stevie Wonder's Talking Book, and then edges into some sultry Teddy Pendergrassish vocals. Sweeeeeeeeet. 10/10

2. Shirley Bassey, "Big Spender (Wild Oscar Remix) -- This is from an entire CD of remixes of Shirley Bassey tunes. Her name may not be familiar to you, but you've certainly heard her stuff, whether it's one of the many '60s Bond movie theme songs she recorded ("Goldfinger," "Diamonds Are Forever") or the brassy showgirl numbers like this one. Not a bad remix, but it gets a little cute at times. 7/10

3. Dub Narcotic Sound System, "Fudgy the Whale" -- You think I'd like a campy Calvin Johnson tune about a crappy Tom Carvel ice cream product, but you'd be wrong. The only time I like to listen to insane nonsense for ten full minutes is when Bill O'Reilly lays down his talking points. 3/10

4. Django Reinhardt, "Saint Louis Blues" -- The greatest guitarist of all time. Period. I'm not sure how he did it -- maybe it was the Belgian-gypsy blood, maybe it was selling his soul to Satan -- but dear Lord can this man play. 9/10

5. The Replacements, "Can't Hardly Wait" -- This may be the perfect distillation of the Replacements, in both sound (right at the peak of Pleased to Meet Me) and style ("Jesus rides beside me / He never buys any smokes"). 7/10

6. The Flaming Lips, "If I Only Had a Brain" -- Absolutely unlistenable. The English language lacks the adjectives to describe the awfulness of this song, which may very well be the worst thing I own. Seriously, boys, lay off the LSD before you're consigned to the care of Nurse Ratchet. 0/10

7. TV on the Radio, "Ambulance" -- It sounds like Peter Gabriel has teamed up with an a capella group, and yet it somehow works. 6/10

8. MC Chris, "Fett's Vette" -- The man who made a splash as MC Pee Pants on "Aqua Teen Hunger Force" appears here with a blistering gangsta-rap boast from the baddest bounty hunter of all: Boba Fett. The entire song is pretty damn funny, with MC Chris delivering lines like "Jabba has a hissyfit / Contact Calrissian / Over a Colt, the plan unfolds / No politic is legitl" in a voice that sounds like Chris Tucker's Smokey character from Friday. This is one you really need to hear yourself, and since MC Chris has the entire album available for free download here, you have no choice. 8/10

9. KISS, "Rock and Roll All Nite" -- You know, I used to rock and roll all night and party every day. And then it was every other day. And now I'm lucky if I can find half an hour each week in which to get funky. 4/10

10. Junior Varsity KM, "Fourshadowing" -- I tend to find most drum'n'bass stuff fairly repetitive, but these folks always come up with something interesting. This song, from their 1999 release, sounds like blissed-out Aphex Twin or some sort of wonderful walking coma. 9/10

You know, I made a remark in the comments last week that I rarely got a song with a rating under five because there were so few of those songs on my iTunes to begin with. Looks like I spoke too soon, since this week I was blessed with a subpar song not once, not twice, but thrice! There was some good stuff in there too, though, so I'm left with a 6.3 average. At least the passing grade means I won't be held back in Coolness School (official motto: "Whatever").

Let's see what you folks can do. Give us your own Friday Random Ten in the comments and, if you want to take this relationship to the next level, add in a Coolness Self-Audit as well.
Posted by Otto Man at Friday, January 20, 2006

You are not helping your credibility -- Fudgy the Whale is freakin' good. While Carvel loses some points for not having cake in their ice cream cake, those chocolate cookie crunch things, which seem to appear only at Carvel, are in the pantheon of greatness. Now I'm going to send Cookie Puss over to break your legs.

3) Underground - Men at Work. Perhaps their gayest song - not that there's anything wrong with that. 6/10

What a week! I wish I had time to actually listen to these songs.

how about a little spilt forty for our homie Wilson 'Wicked-Man' Pickett...we'll miss you, your wonderful soul songs and Staxx greats, and of course your crazy, drunk ass....

2)Since you been gone - Ted leo -- so ted's version is better, but kelly is wayyyy hotter. even with ted's indie cred, the song is just a bit too saccharine for my taste, and I like some poptastic crap....6/10

3)Jeff Goldblum - presley -- not sure what this is classified as: post prog rock, advanced derivative math rock...but I like it.8/10

4)ganja farmer - Marlon Asher -- oh how I wish I could end the FRT on this note, but alas I'll just have to groove on the good vibe and rethink my career....8/10

5)tears on my pillow - clem snide -- one of my favorite all time songs by one of my favorite bands...nice - I'm pretty sure it comes from that weird stubbs the video game soundtrack. it's good, but seems a bit forced to be honest. 7/10

7)one more cup of coffee - white stripes -- this is a good cover, but i can't help but listen and hear Dylan doing a kazillion times better.5/10

9)go down low - grace potter and the nocturnals -- a slow bluesy burner with obvious shades of Mazzy star --hot damn...8/10

As far as Fudgy the Whale goes, I'm standing by my dislike of both the song and the inspiration.

Ever heard the Patton Oswalt routine about Carvel? "He had a voice that sounded like Tom Waits gargling chunks of hot asphalt."

A couple of weeks ago, my brother and I both agreed that we could cut 1,000 songs from our iPods easily and never, ever miss them. Boy, have I got the first ten. My iPod nearly bored me to tears today and it's almost SO boring that I wasn't even going to participate here so as to avoid embarassment and also putting you all the sleep. But then I decided I needed corroboration in the lame-ness of my iPod. I still say they're possesed...

1) La Vie en Rose-Jack Nicholson 2/10
Speaking of Nurse Ratched...this is off the "Something's Gotta Give Soundtrack," which is otherwise enjoyable in a Sunday a.m. brunch kind of way, but this bl-uh-ows! It just gets points for being a cool song.

2) Shri Guru Charanam-Krishna Das 4/10
Ok, I'm a yoga teacher, so I keep a lot of class-appropriate stuff on the 'Pod for that type of thing. And in general, the Das is a pretty entertaining thing to listen to, but this song is a really soft, slow chant that added insult to Jack's injury

3) Non Allegro, Lento (2nd Movement) to Rachmaninoff played by Vladimir Horowitz-7/10
Remember how Rachmaninoff is supposed to be all manic and hard? Right, well, this is the ONE song he has that isn't. Although, I will say this album is really fantastic because Horowitz is such an amazing performer.

5) Nine Crimes-Damien Rice 4/10
Apparently not. I actually skipped this one after about half way through.

8) JTR-Dave Matthews 5/10
Meh. There's about five whole albums that need to get stripped from the iPod.

Wow. That was miserable, non? The iPod is so totally in time out.

Now I'm going to send Cookie Puss over to break your legs.

You can run, Otto, but you can't hide. And in another month Cookie Puss willl have back-up—Cookie O'Puss! You're done for...

Heh. The same Patton Oswalt routine talks about the ways Carvel used the same cake pan over and over again. I can't do the bit justice, but it involves a St. Patrick's Day cake called "Paddy O'Cripply."

Carvel's voice was more like somebody was holding his tongue with a pair of pliers while he recorded the voiceover...

I am seriously digging all the Patton Oswalt love, Otto. Makes me want to go put on my "Here Comes The Gravy Pipe" shirt. But instead, I shall simply present my FRT and then depart.

That gives me a low-ish total this week of 61/100. Ugh. Time to break out the Broken Social Scene, methinks.

I am seriously digging all the Patton Oswalt love, Otto. Makes me want to go put on my "Here Comes The Gravy Pipe" shirt.

I'm starting to understand the steak comments in the Chuck Norris thread. You sound like someone who might be able to survive the food gauntlet at Black Angus that he talks about.

Anyway, the man's a genius. I hope he puts out another disc soon.