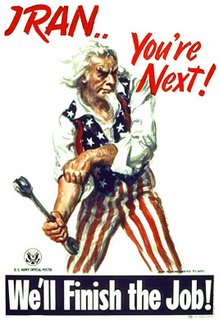 The blogosphere is all atwitter with two different I-words this weekend -- Iran and impeachment.

As far as the new hand-wringing over Iran, it's hard to tell how much of this is a genuine crisis and how much is just another political smokescreen put out by the Republicans to distract from everything going wrong in their world -- the president's approval rating sinking back below 40, congressional Republicans dropping like flies, Brokeback Mountain winning critical acclaim, etc. etc. I'm having a real sense of déja vu these days, with the 2002 script coming back in 2006 with the only real change being that someone changed all the q's to n's. Otherwise, it's feeling a lot like the last midterm election strategy.

Impeachment, meanwhile, is the new topic for everyone from the full-throated advocacy of issuing articles of impeachment coming from The Nation to the reserved recognition on the part of Arlen Specter that if the president really did cross the line in the NSA wiretaps, then "the remedy" is impeachment. I certainly agree with both of them that there's a solid constitutional case for bringing articles of impeachment against Bush, given the fact that he's wholly admitted to acts similar to those outlined in the second impeachment article levied against Nixon. But in political terms, I think it can't happen. I essentially agree with Kevin Drum on this one: if the Democrats issue articles of impeachment now, it'll seem like an act of desperation and, worse, it wouldn't even get out of the House Judiciary Committee.

I think we're going to hear "Iran" and "impeachment" quite a bit on the coming year, as conservatives try to shift the conversation to another foreign policy crisis that merits the president's patented approach of bold incompetence and liberals push back with talk of domestic retribution for his record of incompetent boldness. Personally, I think the Democrats should steer a middle course between the two I's.

On the one hand, they should keep up the tough talk about the president's many misdeeds and demand real answers. Hold off on actual impeachment charges, and instead just keep drawing attention to the Republican scandals in Congress and the administration. If they can maintain a drumbeat on "Republican corruption" and "Republican incompetence," we'll see some results on election day.

On the other hand, the Democrats need to take a strong defensive stance on Iran, one that takes the threat seriously, but doesn't simply write the president a blank check for more bold incompetence. In short, Democrats need to demand congressional oversight and congressional approval every step of the way. This is an attitude that's in keeping with their status as the opposition party and, furthermore, one that will resonate with voters who are starting to realize that Bush Unchained isn't the best approach.

At its highest levels, a strategy of strict congressional oversight would mean that if Bush wants to take military action, then he'd need a formal declaration of war. He doesn't get to do anything pre-emptive or pro-active or whatever he wants to call it without running the reasons, the strategy, and the goal by Congress first. Sure, such a formal declaration hasn't really happened since World War II, but looking over our track record in undeclared wars like Korea, Vietnam and Iraq, I think that's a tradition constitutional requirement that we just might want to bring back.

Personally, I hope it won't get to the point of declaring full-blown war, but that end point needs to be highlighted now by the Democrats in order to get the president to think clearly about options that stand just short of war -- economic sanctions, diplomatic pressure, etc. If he has his eyes set on another fun postwar photo op, he's going to do everything he can to make that happen. The Dems need to make it clear now that the road to war in Iran isn't going to be as easy as the road to war in Iraq.

If the Democrats can steer between these two I's -- keeping up a tough front on the president without going so far as impeachment, while keeping a firm stance on Iran without ceding their congressional duties -- it could bode well for the party in 2006. Having proved that they can act as a strong opposition party without overreaching, the Democrats might finally become an attractive option for voters turned off by the status quo.
Posted by Otto Man at Monday, January 16, 2006

Great post. I bet there will be a direct relationship between the two "I" words, meaning the more impeachment is discussed, the more the admin will publicly obsess over Iran.

Dammit, Iran is in such a better position now than they were 5 years ago. As Juan Cole has pointed out, the big winner in the Iraq war is Iran. When their crazy president says stuff the U.S., he doesn't seem nearly as crazy as one of the classic Khomeni's, partly because Bush has justified some of their formerly baseless criticisms.

My prediction: every time Howard Dean goes on meet the press, our military will bomb a "strategic site" in Iran.

I agree that these two are going to work in tandem, especially with Iran coming up when others press the impeachment issue. I always thought the "wag the dog" idea was lame, but I think we might have a case for it here.

Has anyone informed Iran that nuclear weaponry is SO 1987? I mean, seriously, if you want to get real about making threats like that, then hire Chemical Ali. I hear he's not up to much these days.

I've never understood why anyone takes Iran seriously with regards to their threats about anything. If Salman Rushdie managed to dodge an extremely pointed fatwah for 15-odd years (ok, ok, so he DID spend some time in hiding) then I really find it hard to believe that we as a nation, or the West as a whole, has too much to worry about with regards to Iranian dissent. I could be wrong, but I'm just saying.

People owe it to themselves to stop the paranoid, press-induced (read: Rove) madness and do some reading about Iran because it's a particularly fascinating country. For starters, I recommend Elaine Sciolino's (she's a correspondent for the NYTimes and was on Khomeini's plane in '79) "Persian Mirrors." Great book.

As to the other I-word, impeachment, this is the first I'm hearing of it. It's the Republicans who play dirty that way, so I don't think the Dems will sling the sand back this time. Arguably, we could probably find grounds to impeach just about every president who's served in the 20th century so I think it's best to start a trend of doing so at every juncture going forward.