It's been a while since we last opened the floor for a discussion of our favorite obscure films. The responses last time we great, so let's give it another try: Which lesser-known movies -- forgotten classics, obscure indie flicks, foreign films, etc. -- have been a pleasant surprise for you? What should we, the Netflix Members of North America, have queued up?

Here's some of my recent rental activity: 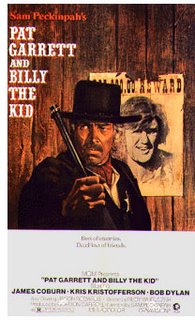 Pat Garrett & Billy the Kid (1973): While perhaps not as well known as, say, The Wild Bunch, this classic Sam Peckinpah western is every bit as good. The lead roles, played by James Coburn and Kris Kristofferson respectively, are outstanding, but the real surprise is Bob Dylan. I knew he did the music for the film -- this is where "Knockin' on Heaven's Door" first appeared -- but I had no idea he acted in the film. This isn't Jon Bon Jovi making a cameo in Young Guns 2; Dylan has a somewhat substantial role as a quiet cutthroat named "Alias." Sure, the character he plays is a quiet one, but he also throws a knife through a bad guy's throat at one point. Highly recommended. (The film. Not a knife through the throat.)

City on Fire (1987): A Hong Kong classic starring (who else?) Chow Yun-Fat. I'd heard this film was "the inspiration" for Tarantino's Reservoir Dogs, but I spent most of the movie scratching my head about the comparisons. Until the last half hour, when the undercover-cop hero infiltrates a gang of jewel thieves, joins them on a heist that goes awry when one of their members starts shooting people, flees with them as some of the thieves get caught, gets shot himself, holes up in the abandoned warehouse that serves as their rallying point, gets involved in a Mexican stand-off with the other crooks who are suspicious of a leak, and then confesses to another thief that he's really a cop. Other than those minor plot points, I think Tarantino came up with the rest of his movie all on his own.

The Long Goodbye (1973): I'd read the book and seen the original film, but for some reason I'd never seen this Robert Altman remake starring none other than Elliott Gould. Not only does the film noir style work in early '70s Malibu, but it might even work better than the original 1940s setting, since the decay of the city and listlessness of its people are even more apparent. (Alright, I'm sounding like Roger Ebert. Pfft.) Like all great '70s films, this one has some great bits of casting, ranging from Henry Gibson as an albino quack rehab doctor and a fresh-off-the-boat Arnold Schwarzeneggar in an uncredited, nonspeaking role as a hired goon. A hired goon who at one point takes off his shirt and pants to intimidate Elliott Gould. And, apparently, to intimidate the cameraman, since he looks directly into the lens. Twice. 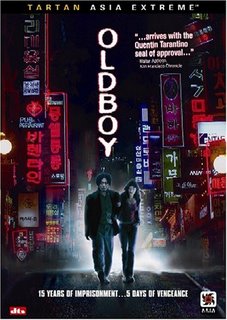 Oldboy (2003): I checked out this Chan-Wook Park film without really knowing much about him or the film. It's a disturbing tale, one that answers the age-old question of what Edgar Allan Poe might have done if he'd been born in late-20th-century Korea. Speaking of legends, it's clear that Park has the Hitchcock knack for suspense and stunning visuals. I wasn't entirely floored by this flick, but I'm sure the director has even better work ahead of him.

Advise & Consent (1962): I know I already talked about this in the filibuster post below, but it deserves discussion as a movie unto itself. For a political story, Preminger does an amazing job with the pacing and the plot twists, which keep on coming. Burgess Meredith accuses Henry Fonda of being a communist! Charles Laughton does a dead-on impersonation of a South Carolina Dixiecrat! A secretly gay Mormon senator gets blackmailed! And, hey, was that Betty White? Again, not just a good film, but a good reminder of how the congressional branch once worked. 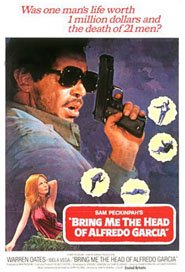 Bring Me the Head of Alfredo Garcia (1974): Yes, another Peckinpah film. Apparently, he was churning these out like counterfeit money in the early '70s. I've wanted to see this one for a long time, partly because I've liked Peckinpah's past work, and partly because I wanted to understand a line of dialogue from Fletch. This one's a "modern Western" set in 1970s Mexico and involving an old-school bounty hunt. The weirdest part for me is that the hardcore, jaded, drunk antihero at the center of the story is Warren Oates, an actor who's probably best-known for playing Sgt. Hulka in Stripes. Here, he sticks his big toe right up the Mexican underworld's butt.

Alright, that's enough to start the discussion. But in the spirit of Advise & Consent, I request permission from the chair to revise and amend my remarks at a later date.

Please throw your favorite semi-obscure films in the comments below.
Posted by Otto Man at Saturday, January 28, 2006

"Advise and Consent" is an incredibly good movie. As you mentioned, the casting alone is remarkable.

Does any movie star, past or present, look or sound more like a prototypical U.S. president than Walter Pigeon? I sure can't think of one.

Raging Bull was on PBS the other night. I had never seen it before (boo, I know) but since so much of that film is referenced, quoted, and spoofed - it really undercut the impact of the film.

That being said, I finally saw Cinderella Man - That was a quality film.

Finally, in homage to Shelly "who didn't I sleep with" Winters, I watched Posiden Adventure. This just in - still sucks.

Sorry, meant to say thanks for doing these "culture posts" - fun to think about and a nice balance to my potty humor genre.

Walter Pigeon really embodied the senator's role in that film. Much more than Peter Lawford, who seemed to be phoning in his performance from the Rat Pack's latest party. All in all, I think the best political chameleon is Lew Ayres as the VP -- he grows a lot in that role.

"Raging Bull" is a classic, but I can see how the pop culture references might've dulled it down. Still, nothing can take away from that beautifully choreographed fight between LaMotta and Robinson. Daaaaaamn.

As far as bringing the gift of culture, SD, it's all part of the cultural mosaic that makes up our Nachos. Think of this kind of post as the scallions, and your farting preacher posts as the beans.

Just looked at Peckinpah's directing run, and dammit if the man wasn't averaging a film a year from 1969 through 1978. And these weren't little films, either:

Next up on my list is Killer Elite, a CIA story starring James Caan and Robert Duvall.

He also ripped off the opening sequence for Reservoir Dogs (guys in suits with sunglasses walkin' down the street) from Seijun Suzuki's Tokyo Drifter. You can take the director out of the video store, but you can't...

And the "Mr. White" and "Mr. Blue"-style names came from "The Taking of Pelham One Two Three." What a thief.

I think in the first version of the script, Nice Guy Eddie's name was originally "Chewbacca."

" Walter Pigeon really embodied the senator's role in that film."

I didn't do much of a job being precise in my previous comment and things sort of ran together.

Let me put it differently. Whatever his role in "Advise and Constent," I think Walter Pigeon looks like a president type; a senator, too, for that matter.

Oh, I understood what you meant SWA, and I agree on both counts. Although these days, a presidential type couldn't get away with a moustache.

Funny, Pat Garret & BTK is on the way to me now from Netflix. I put off seeing it for so long because I really don't want to watch Bob Dylan act. (I love the man's music, but I try to look at him as little as possible.)

I was diappointed with City on Fire. I saw it because of the whole Tarantino thing, and was equally mystified by the comparison to Resevoir Dogs. Whoever came up with that is a great marketer -- they deserve a raise for tying those two films together. Apart from that, though, I found CoF pretty boring. The actions scenes were few and far between. Maybe I was just expecting more, or maybe my opinion of it was colored by the horrible dubbing on the version I watched.

Here are a few movies that you really need to see:

2) Winchester '73 (1950). So you like Jimmy Stewart, but you wish he did more twisted roles that brought out his dark side (think Vertigo). Well, you're in luck. The series of Westerns that Stewart did with Anthony Mann are all superb and allow crazy Jimmy Stewart to peek out from around his all-American exterior. Other superstars pop up in this film before they were stars: Tony Curtis, Rock Hudson, and unrecognizably attractive Shelley Winters.

3) Peeping Tom (1960). This is a horror movie that was ahead of its time. So far that it pretty much ended the director's career. (And Michael Powell had already done well-received big budgeters like Black Narcissus and The Red Shoes.) I don't anyone would call it shocking today, but it's still a damn fine piece of moviemaking. Martin Scorscese is a big chamption of this film, comparing it with Fellini's 8 1/2. The gimmick, and why the film was so reviled, is that the killer films the death of his victims and we get to watch. The opening tracking shot would make Hitchcock (or Scorscese) green with envy.

I'll agree with you on CoF. The movie was a pretty big disappointment. (I should've put "classic" in quotation marks in the review, sort of like I just did!) The only appeal it has is if you'd like to see just how much Tarantino stole. Otherwise, go rent Hard Boiled.

I've been meaning to check out Winchester '73. Addin' it to the queue.

As I have been living in some kind of hole, I just found out that the extended version of Dune is being released on DVD tomorrow! Woo hoo! I hope that all the extension isn't the male-narrated series of sketches that have previously aired on TV.

So, I will be heading to Target after work in order to snag a copy, and then annoy T'hous after dinner. (Yeah, after--darn gross Baron.) I haven't seen the movie since I was 10, so now I'll see if captured the feel of the book like it captured the look of it.

No nudity? Man, I was really hoping to see some Gordon Sumner ass.

And Tarantino never claimed he was original. He just turned Asian cinema Anglo.