Mayhem of the Mooninites 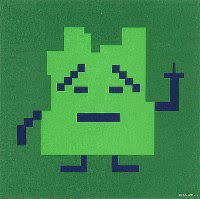 The suspicious devices which forced bomb units to scramble across Boston today were actually magnetic lights that are part of a marketing campaign for a television cartoon.

The reports forced the temporary shutdowns of Interstate 93 out of the city, a key inbound roadway, a bridge between Boston and Cambridge, and a portion of the Charles River but were quickly determined not to be explosive.

All of the devices are magnetic lights which resemble a character on the show "Aqua Teen Hunger Force", on Turner Broadcasting's Cartoon Network.

The Mooninites offer their rebuttal here.
Posted by Otto Man at Wednesday, January 31, 2007

It didn't take the ytmnd crew too long to respond to this one.

I wonder if there was any moonajuana in those boxes.

Somebody is going to be spanked with some moonrocks. Thank goodness calmer heads have prevailed and nobody is overreacting.

I cannot believe what a clusterfuck this became.

From all the hubbub, you'd think they wrote "The Moon Rulez #1" with a key on the Lincoln Memorial or something. Sheesh.

Jesus, I just saw the picture at iRod's link.

How'd you like to be the straightlaced guy on the left, on trial for a terrorism scare with a dude who looks like an extra from "Battlefield Earth"?

Maybe the Scientologists will provide legal representation. Or at least an impassioned tirade from Tom Cruise.

Please, like the city that afflicted America with baked beans has any business complaining about terror...