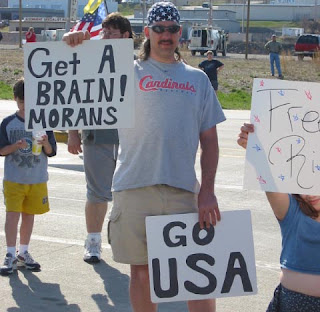 Via Kos, I read this article about how thoroughly Bush screwed up Iraq from a domestic politics point of view.

The biggest complaint I hear from Republicans who may find themselves in competitive '08 races is that Democrats don't own a piece of the Iraq problem. And that was the beauty (politically speaking) of the ISG. There were a few things that didn't thrill some Democrats, but they were generally willing to sign on to most of the bipartisan group's findings. Had Bush bought in, the political pressure would have been on the Democrats to buy in. And the moment Iraq becomes an American problem rather than a Republican problem, the GOP would have a more level playing field.

With the White House wholly rejecting the "get the GOP out of Iraq" card, the president managed to do something many thought was nearly impossible: He strengthened the GOP's ties to the war.

Surely Bush, Rove, Cheney, etc. have been in politics long enough to know what they are doing. Surely they know that the ISG, flawed as it was, was their last, best hope to spread blame to somebody -- anybody -- else. This should completely obliterate any lingering doubts that remained about Bush being perfectly content to see Iraq's immolation continue for two more years -- and let the GOP take the blame for it.

I suppose I should be happy that this deeply unpopular war will be strongly associated with this deeply unpopular president and his party, giving the Democrats an even greater chance to win the presidency in '08. I know it should make me smile contentedly and feel smug, but this political suicide scares the hell out of me.

When people who hold great power aren't concerned at all about the future -- events less than two years away -- this is not a good sign.
Posted by InanimateCarbonRod at Thursday, January 25, 2007

Ah, but Bush insists it's still winnable. Not to be outdone, Cheney insists great things are happening over there every day and with the aid of our able Iraqi allies, we're on the march to victory.

They probably both go to bed dreaming of a ticker-tape V-I Day parade down Fifth Avenue.

I learned yesterday that a fraternity brother of mine from college was killed in action on October 22 in Iraq. He wanted to be a military man since birth and made the rank of Major. He leaves behind a wife. Very sad. We are sending 22,000 more.

That is sad, S.D. It brings to mind a song from another era that resonates yet today, "Where Have All the Flowers Gone," by Peter, Paul and Mary.

Sorry to hear that, SD.

Sorry for your loss, SD.