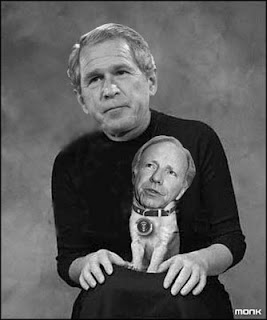 Over at Crooks & Liars, you'll have the pleasure of watching Sen. Chuck Hagel -- the last sane Republican, apparently -- smack the sanctimonius taste right out of Joe Lieberman's mouth.

After a week in which Holy Joe emerged as the poster boy for escalation in Iraq *and* backtracked away from the investigation of Bush's bungled handling of Hurricane Katrina, it was nice to see him given a much deserved wedgie on national television.

In light of the clear difference of opinion between these two senators, I'd like to propose a hostage exchange with our Republican counterparts. We'll give you Lieberman in exchange for Hagel. Clearly, the insane one belongs on your circle, and the clear-eyed guy has a seat waiting here in the Reality Based Community. Deal?
Posted by Otto Man at Sunday, January 14, 2007