This latest meme is actually an interesting one, focused on questions about art and culture and all that shit. Here we go:

1. Name a book that you want to share so much that you keep giving away copies: Personally, I think this question is a little flawed. I don't really go around giving away copies of books, and if I did, I'd make a career out of it by working for those Gideon people, sneaking into hotel rooms and planting Bibles in nightstands.

But there are books I've loaned out to a few friends. (Take that, you stupid library!) Chief among these would be David Sedaris's Me Talk Pretty One Day, which is probably the funniest thing I've ever read, and Dan Savage's Skipping Toward Gomorrah: The Seven Deadly Sins and the Pursuit of Happiness in America, which is the funniest socially-critical thing I've ever read.

2. Name a piece of music that changed the way you listen to music: This is an interesting one and I could probably answer it a million ways.

As the regular contestants on our Friday Random Ten will attest, I have a serious soft spot for lesser-known R&B, funk, and soul songs that have gained greater fame as sampled beats in hiphop songs. It's hard to pinpoint where this obsession came from, but one of the earliest finds was a terrific scorching bit of organ-driven jazz called "Mystic Brew" by Ronnie Foster. It's a great song on its own, but what really sold me was that finding it finally answered the question of where the backing music for Tribe Called Quest's "Electric Relaxation" came from. Ever since, I've developed a subconscious habit of keeping an ear out for where rhythms and beats have surfaced in later songs, and vice versa.

3. Name a film you can watch again and again without fatigue: This is another hard one, seeing how I'm a film junkie. I could go with any of a number of classic films that I can, and have, watched over and over. They're mostly comedies, like Raising Arizona, Blazing Saddles, The Big Lebowski, and Stripes, with a couple epic westerns in the mix, like The Good, The Bad, and The Ugly and The Magnificent Seven.

But based on empirical studies, I'd have to give the nod to GoodFellas. It seems I am physically incapable of turning this movie off whenever I stumble upon it on cable. Doesn't matter what part of the movie I come in on, I generally toss the remote across the couch and let it roll. Scorcese is a genius, regardless of what the Oscar clowns may say, and this is his masterpiece. I still can't believe that Kevin Crapner's Dances with Cliches won Best Picture that year instead of this. Boooooo!

4. Name a performer for whom you suspend of all disbelief: This one's easy. Philip Seymour Hoffman.

No matter what he plays -- whether it be an uptight nerd (Big Lebowski, 25th Hour) or a comatosely cool slacker (Almost Famous, Along Came Polly); a pompous asshole (Scent of a Woman, The Talented Mr. Ripley) or a meek loser (Boogie Nights) -- I tend to buy it completely. (In fact, looking over those titles, I'm struck by the fact that I only really liked a few of those films, but loved his acting in every one.) My God, he's a man who's been known for playing big, loud, bearish men and the second I saw him in Capote as a diminutive, dainty socialite, I was gone.

The lovely and talented Malibu Stacy and I once saw him play the loser brother in a production of Sam Shepherd's "True West," where he and John C. Reilly (another potential answer here) were trading the leading roles each night. He nailed it perfectly. My only regret was that we couldn't get tickets to see them switch the tables and see him work the uptight brother for a while.

5. Name a work of art you'd like to live with: Another easy one, as there's a single print that appears in both my home and office: Jasper Johns' "Map" (1961). 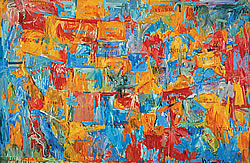 I'm a sucker for Pop Art in general and Johns' work in particular. I couldn't tell you why this one is my favorite, but at some subconscious level, it's always seemed to sum up a vibrant, liberal vision of American patriotism to me. It has energy, chaos, diversity and passion. And it's my country, dammit, no matter how many miniature American flags the Republican Party spews out for the dittoheads.

Plus, it's got all them pretty colors in it what I like.

6. Name a work of fiction which has penetrated your real life: As an ex-pat Southerner living in the North, I've always had a soft spot for Southern fiction. It always seems to breathe life into a past that's half-forgotten even when you live in the region. I'll go with Robert Penn Warren's All the King's Men, as it never lets me forget the good and bad of the South, all rolled into one.

7. Name a punch line that always makes you laugh: I'll follow Mike's lead here and go with a classic bit of Woody Allen -- when Annie Hall parks her car a full yard off the street, and Allen's character says reassuringly, "No, no. It's OK. We can walk to the curb from here." Never fails to make me laugh.

Alright, now for the hardest part -- passing this along. I always hate doing this, because it feels vaguely like sending along a chain letter. A chain letter that requires homework. But these are some interesting questions and I'm genuinely curious how a pack of cultured sophisticates like Norbizness, Travis G., and Mr. Furious answer them.

That Annie Hall quotation is a good one. That whole scene, from the breakneck car ride uptown, til the end of their conversation on the deck is a tour de force.

And by the way, I've got The Good, The Bad & The Ugly lined up for FIRST TIME VIEWING. Not in the queue, but on the table right over there.

Nice. You might appreciate it more if you'd seen the previous installments in the trilogy, but I'm sure you'll do fine. Enjoy.

By the way, speaking of Hoffman playing . . . I don't wanna say against type, but a different type: the Mattress Man in Punch Drunk Love.

Hard to beleieve it's not only the same actor that played the nebishes in Boogie Nights & Magnolia, but the same director too.

1. Name a book that you want to share so much that you keep giving away copies:

2. Name a piece of music that changed the way you listen to music:

Paul's Boutique - Beastie Boys. It was the first time I had ... umm. It music was forever different.

3. Name a film you can watch again and again without fatigue:

American Movie. It is so very classic American and yet motivating to me for avoiding becoming the lead character.

4. Name a performer for whom you suspend of all disbelief:

One of Van Gogh's early Oriental works. The combination of that unique style and those Eastern themes is an amazing combination.

6. Name a work of fiction which has penetrated your real life:

Karma Sutra. It can't be true; but I seem to think about it.

7. Name a punch line that always makes you laugh:

I'll succumb and answer all the questions properly tomorrow, but here a re a couple quick responses...

4. My wife saw he same play (without me) and could not stop raving.

SDave:
American Movie is one of the worst three films I've ever seen. And by "seen" I mean couldn't finish. Dogma is also on that short list.

American Movie is one of the worst three films I've ever seen.

Have to believe if you see Coven, pronounced "Coh-ven," or "Northwestern," you'd drop American Movie to worse 5.

SD, have you seen either of Borshard's masterpieces? I haven't, but I heard they're actually available (or maybe just one of them).

I know a lot of people don't care too much for it, but one movie I could (and have) watched over and over again is Office Space. Awesome soundtrack...Damn, it feels good to be a gangsta!

As for music, I'd have to say any there are many, many songs that have changed the way I listen to music. When I was young and surrounded by metal hairbands and lame classic rock stations, Sgt. Pepper first came out on CD. That really broadened my horizons. Next, a few years down the line, a friend at college loaned me Surfer Rosa by the Pixies...what a revelation! the first time I heard Beck, Morphine, PJ Harvey, the Flaming Lips, Modest Mouse, Jane's Addiction, Henry Rollins...ack, I could go on.

All the King's Men is one of my all-time favorites, too. And as someone with no love for the South (my folks were civil-rights workers in Mississippi when I was a kid, so I think I've earned my prejudices), I have to agree with you about southern fiction.

Alright, the results are in

What about the rest of you LLPON clowns?

I think IRod is trying to decide which Foxworthy book to go with, while Thrillhous is mired in the dilemma of selecting just one Yes album.

I'm pitching in to add a new voice to the mix. Saw a mutual friend over Christmas and he encouraged me to join the other 6 readers.

Book: Jitterbug Perfume- Tom Robbins. Makes me feel like I could live forever if I try hard enough.

Music: Ice, Ice Baby- maybe I too could live out my fantasy as a crappy rapper someday too...

Film: Office Space- hands down the best movie to come home to after a hard day of beating my head against the wall at the office. I also have multiple bosses so it hits home for me. Through in the novelty rap and it soars!

Performer: I'm going with Johnny Depp. His early roles were much meatier for lack of a better word, but anyone who can do Keith Richards as a pirate is icing on the cake.

Art: If by art you mean something good, I have no idea. If you mean cheap wall hangings purchased from small vendors- I'm your girl. Although I have no idea what their names are now.

Punch Line: pretty much any lame joke from Zoolander. It's embarassing, but it's so damn funny to me!

Jitterbug Perfume- Tom Robbins. Makes me feel like I could live forever if I try hard enough.

That's a good one. Along with Skinny Legs & All, that may be my favorite Robbins.

I'm pitching in to add a new voice to the mix. Saw a mutual friend over Christmas and he encouraged me to join the other 6 readers.

Welcome aboard. At this growth rate, we may need to bust out the folding table soon.

we may need to bust out the folding table soon.

As long as you don't make me sit at the kid's table, I'm cool.

Otto Man, it's good to see someone give a nod to Dan Savage. His column, when it doens't gross me out, cracks me up--and often it does both. And the book takes things to a higher level.

Yeah, he often treads the grossout/crackup line with me too. The book is much more crackup, though, and always a safe recommendation.