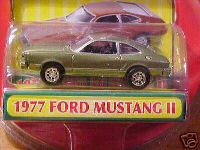 The Post has a pair of articles that makes me want to torch my wife's Mustang (she's got a lame 2000, nowhere near as cool as the awesome 1976 Mustang II "mpg" I used to drive). One article is about congress considering an increase in fuel standards for passenger cars, while Bush wants to have control over passenger car fuel standards transferred to the executive branch (shock!) under NHTSA. You remember NHTSA, the agency that took on the auto industry by spiking fuel standards for SUVs and trucks a whopping 1.8 mpg by 2011.

The auto industry, primarily the Detroit-based joints, are deadset against a meaningful increase in fuel standards for cars, which haven't been changed since the mid-1980s. They say that the costs associated with fuel-saving technology are just too steep for them to bear without government giveaways; besides, I don't think anyone could have possibly anticipated that the world's oil supply was limited.

Which brings us to the second article, which is about Ford's gigantic losses in 2006.

Ford Motor Co. lost $12.7 billion last year, a historic amount of red ink that comes as the 103-year-old company scrambles to restructure, cut costs and recapture some of its standing in the auto market.

Nearly displaced by Toyota Motor Corp. as the number-two automaker in the United States, Ford is refocusing on smaller, more fuel efficient cars, renegotiating contracts with its labor unions and closing factories.

So there were several reasons why Ford lost big, but one of the main ones was THEIR CARS AREN'T FUEL EFFICIENT. They have been losing market share for several years to car makers that make FUEL-EFFICIENT CARS, because PEOPLE WANT FUEL-EFFICIENT CARS. If I didn't know better, I'd say that Ford might be able to make some money by building some of them things themselves, maybe some that use this electricity stuff.

I think we know where this is headed; Detroit isn't really opposed to the fuel standards, they just want a free lunch. Congress will increase fuel standards, but they'll also give huge tax credits to Detroit to build more fuel-efficient cars. The CEOs will get more ivory backscratchers, the auto workers pensions will continue to be underfunded, the Mustang II "mpg" will be reborn (okay, I lied when I said it was awesome; it really really sucked), and Toyota will be the world's number 1 car company.

Posted by Thrillhous at Thursday, January 25, 2007

Per CNN:"That works out to a loss of just over $24,000 a minute throughout the course of the year, or about the price of a Ford Mustang."

Maybe the Ford family should go into some other line of work, like managing a professional football team.

Better fuel efficiency would certainly help U.S. automakers. But they need to keep after fit, finish and preventing things like Ford's insane default-to-hot ignition switch problem of a few years back. That's the one that not only ruined a few vehicles, but completely destroyed one home, along with the vehicle. That was just design stupidity of the worst kind.

I still want to know why at least one U.S. automaker can't build one or more vehicles designed specifically for emerging markets, for export.

Emerging markets would struggle with John Mellencamp's pro-everything theme. They have small penis.

My car may not be fuel-efficient, but my driving habit is--I don't hardly ever go anywhere! And I get out even less now because of the baby!

Since the Model T, everything the Fords have touched has turned to shit -- the Edsel, the Lions, and now this.

I mean, anti-Semitism was doing a thriving business until Henry Ford started pushing the Protocols of the Elders of Zion. And look at it now. Mel Gibson's the last holdout, and even he's getting marginalized.