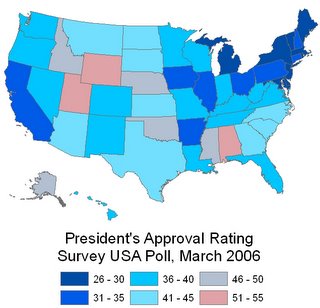 Last month, we reported on the Survey USA state-by-state polls that revealed that President Bush had a positive approval number in just six states in the Union.

Well, the new numbers are out, and the picture's gotten even worse for C-Plus Augustus. Now, Bush is above 50% in just three states -- Utah, Wyoming, and Alabama -- and those numbers are 55%, 52%, and 51% respectively. Just check out the map to the right to get a sense of how bad things are looking for the president.

As I said last time, it's looking like Bush just may wind up uniting the country after all. For all our differences, we're all starting to agree on one important thing. He sucks as a president.