The Madness of King George 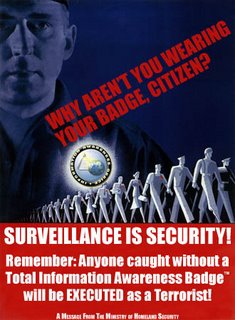 According to a forthcoming piece in U.S. News & World Report, the Bush administration's contempt for the Constitution extends well beyond conducting warrantless wiretaps, as illegal as that is. Apparently, they argued early on that the president also had the right to conduct warrantless physical searches of the homes and offices of anybody they chose. They asserted that the president had the inherent right to break into anyone's home or anyone's office, whenever he wanted, on whatever whim he felt, with no obligation to show just cause or explain his reasons before a court of law -- not even after the fact, as FISA allowed with wiretapping.

The utter contempt for the Constitution here -- specifically, the entire Fourth Amendment -- is just staggering. As law professor Jonathan Turley notes in this appearance on Keith Olbermann's show, the Bush administration "treats the Constitution as some kind of legal technicality, instead of the thing we're fighting to protect."

According to these yokels, we have to destroy America in order to save it.
Posted by Otto Man at Saturday, March 18, 2006

What pisses me off more than this is the fact that so many Americans seem to be OK with this...news like this should send waves of people into the White House, demanding the head of the president.

Amen. Americans need to be reminded that waving the flag and waiving their rights are not the same thing. In fact, they're diametrically opposed.

I saw Turley on "Countdown" and was impressed by how outspoken and definite he was in telling like it is.

As for most Americans and many members of Congress, I think there's a lot of inertia and denial at work. We've been through so many presidents and administrations, some good, some not so good. But either way, most operate within a range of conduct that's at least acceptable on a basic, constitutional level.

So that's what people expect and tend to believe is going on, even from a president whose competence they find appallingly lacking and whose policiies they mostly disagree with.

Fortunately for Bush & Co., the terror war fig leaf is just enough to provide the cover most Americans seem to want to see.

Another way to look at it is that Bush always has an excuse, and the terror threat is his excuse to err on the side of doing whaever pops into his perverse head to do, constitutional niceties be damned.

Down the road, people may find the next president to operate this way will take things farther, maybe all the way to a fascist displacement of democracy, once and for all.