In honor of this most holy day, we decided to turn on Smittyvision and give you double posts (actually, there's something up with blogger; I'm guessing they're still recovering from the Syracuse loss). Too bad there's not a "blurry" font. Here is Otto Man's original FRT in all its gospel-hating glory. Comment like the wind! 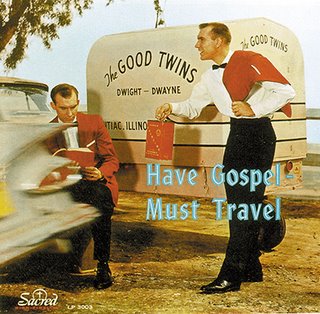 Hmmm. "Have Gospel, Must Travel." Notice that it's not the traditional "Will Travel," but rather "Must Travel," like they're a pair of Jehovah's Witnesses getting chased away from the front door of a trailer with a 12-gauge shotgun and a brusque invitation to "meet Jesus raht now!"

Well, God willing, the Good Twins have some kind of superpowers to fight back in the name of the Lord. (And I mean real superpowers, not the turning-into-a-bucket-of-water "powers" that the special ed Wonder Twins had.) If not, they're going to be walking the earth like Kane for a long, long time.

Time for the Friday Random Ten. Take out your iThingy, set it on random, and give us the first ten songs that fall out. No skipping the shame, my friends. Be honest. And, if you're feeling self-exploratory, throw in a Coolness Self Audit as well.

Let's do this thing!

1. Undertow Orchestra, "Closing Down My House" -- You'd think that a supergroup of David Bazan, Vic Chesnutt, Mark Eitzel and Will Johnson would have the potential of becoming a weak, alternative version of the Traveling Wilburys, but this is surprisingly good. A live track from an appearance at the 40 Watt in Athens. 8/10

2. Someone Still Loves You Boris Yeltsin, "House Fire" -- This group apparently heeded Principal Skinner's advice: "We need a name that sounds witty at first, but gets less and less funny the more times you hear it." It's a shame about the band name, because this is some nice acoustic alternapop with a catchy hook. 7/10

3. Man ... or Astro-Man?, "Curious Constructs" -- This band is easily the coolest thing to come out of Auburn, Alabama, since Bo Jackson. Surfabilly insanity with a stage show that puts the weirdness of the music to shame. This isn't one of my favorites, though. A little plodding. 5/10

4. Django Reinhardt and Stephane Grappelli, "Swing '39" -- I recently learned that Reinhardt had no use in the pinky and ring fingers on his strumming hand, which makes his status as the greatest guitarist of all time even more mind-boggling. This is a mellow number with his occasional partner, the violinist Stephane Grappelli. Sweet morning music. 7/10

5. Mudhoney, "In 'n' Out of Grace" -- Every time I hear this song, I'm reminded of a college roommate who would crack open a Pabst Blue Ribbon during the opening monologue (from the excellent Corman biker film "Wild Angels") and chug the entire can during the drum intro that followed. That man is now an accountant. 9/10

6. KISS, "Detroit Rock City" -- Hey, hey! Looks like we're going to double down on some rawk. As a former sticker-wearing member of the KISS Army, I've got to follow the orders that Paul, Gene, and Ace lay down here. But not Peter Criss. After "Beth," he was dead to me. 7/10

7. The Jimi Hendrix Experience, "I Was Made to Love Her" -- Trifecta! This is a live instrumental from a BBC performance. Pretty damn cool. 8/10

8. Beck, "Deadweight" -- Another great soundtrack for a horrible film, this time A Life Less Ordinary. Catchy as hell, this is probably one of my favorite songs by my favorite Scientologist. 9/10

9. Lambchop, "New Cobweb Summer" -- I normally love Lambchop, but this song lacks the winking irony that made the Nixon album great. Instead, it just comes off like a Leonard Cohen cover singer. Eh. 3/10

10. Afro Blues Quintet Plus One, "La La La La La" -- Two minutes of flute-filled, vibraphone-driven hand-clapping soul. I'm not sure, but I think you're supposed to snap your approval of this one, daddy-o. 7/10

Alright, that gives me a 7.1 average. Once again, as part of the MTV Generation, I apparently feel neither highs nor lows.

Think you can do better? Drop your own random ten in the comments below, with or without accounting for your coolness or lack thereof.

Update: If this is your first visit to this blog today, two things are true: 1) you didn't see that we had two corrupted copies of the FRT up; 2) you aren't spending nearly enough time here and we will hate you forever.
Posted by Thrillhous at Friday, March 17, 2006

Now that all that blogger unpleasantness is behind us, let's get to rockin'!

3) Goodbye to Romance - Ozzy. I'd say they played this song at all my junior high dance functions, but I never went to any of them (don't tell Mrs. T). 9/10

5) Back on the Road Again - REO Speedwagon. This one is sung by the non-Kevin Cronin singer. Sux. 2/10

9) The Shortest Straw - Metallica. From back when I was willing to pay money for their stuff. Great tune. 9/10

What a list! That was some serious songs, after the rocky Floyd-Police start.

Thanks for fixing the error, Thrillhous. For a second I thought I was seein' double -- four Krustys!?!?

And speaking of seeing double:

So I got all fancy and added so many pictures and crap to my normal random 10 beers today that I couldn't just do an easy cut-nad-paste to your FRT. So slam a few shots of Jameson, and allow me to be as crass as to provide a link to my random 10. Sorry.

The Good Twins? I wonder if they had a pair of honky-tonk dopplegangers.

I couldn't just do an easy cut-nad-paste

I don't care how drunk I get today, you're not coming anywhere near my nads with scissors and that kind of attitude.

The Good Twins? I wonder if they had a pair of honky-tonk dopplegangers.

If they did, I assume they'd have kickass goatees. Which, of course, would fit the part perfectly.

Just so you know, I was ready to comment last night, but it wouldn't let me. So phhhtthh.

Again, up late doing some freelance work on the big G5. Which is good because the iPod is getting so stale I think I hit skip at least 7 or 8 times on the way home today. Roll 'em...

1. Joe Walsh "The Confessor" -- My wife got me an iTunes card for Valentine's Day. This is one of the many single songs from back in the day that I've been filling in with. Stuff I have on vinyl, that I'll never buy on CD... I love this freaking song. Minus one for the overly electronic drums... 8/10

2. Rhino Bucket "One Night Stand" -- They wish they were AC/DC. I mean, they are practically a cover band. First heard on the radio in Maryland or so on the way back from Spring Break in college. 6/10

3. Chicago "Feelin' Stronger Every Day" -- Solid. Too bad most people think of the MTV era crap when you mention Chicago. 8/10

4. dada "How To Be Found" -- Title track from the last album. Much as I enjoy the band coming back from "retirement" and they are as good live as ever, but this album and this song in particular is super-weak. 3/10

6. Tears For Fears "I Choose You" A jarring transition to say the least. Off the strong "Raoul" album which was a good follow to the excellent "Elemental." Both waaay better than the "Sowing the Seeds"-era pablum. 5/10

8. Jonny Lang "When I Come To You" I don't know why I have this. I think my dad of all people might have bought it for me... It's pretty good blues technique-ly, but doesn't seem quite authentic. 6/10

6.0 Ouch. It didn't taste that bad going down. I think I am grading a little tougher these days.

OM- Since you brought it up... I have friends who went to Auburn back in the 80s and can you even imagine going to a college where Charles Barkley and Bo Jackson are "semi-frowned-upon" at parties because they're black? That's what my friend said... I can't think of a guy I'd rather party with than Charles Barkley. Just keep clear of the plate glass windows.

Jeez, is Beck really a Scientoligist? I don't think I can handle finding that out the same week as Isaac Hayes.

Thrillhous- I gave the same tune a six, and that WAS the last time I was willing to pay money for their stuff...

And, there is no such thing as non-Cronin REO, non-Rodgers Bad Company or a female-lead Little Feat. So it is written.

I hate to break it to you but there is no such thing as "awesome" Europe either.

(Since it's hair metal, I feel justified in mocking it. I don't normally call people out like that, but I trust you are numbed to it.)

Sadly, yes, Beck is a member of the L. Ron Hubbard Crazy Cult.

Weird story about Auburn. Sounds like they're still stuck in the '60s. The 1860s.

Thanks for mentioning me in your FRT today. Please note that I copyrighted slamming a beer to the intro of In 'N Out of Grace many years ago. I expect a royalty check in the mail soon.

I thought the royalties only had to be paid if we imitated your actions, and not simply described your heroic feats of derring-do?

Whatever, a check for 3 cents is in the mail!

I can't think of a guy I'd rather party with than Charles Barkley.

Second to last time I was in Vegas, I missed partying with CB by about 10 minutes. It was a buddy's bachelor party, we were at this club (a real club, sadly, not an establishment). I hate this club so I leave, when I meet up with the guys later, they have a story, (and a $1000 dollar 'champaign' bill) about hanging with Chucky, Jim Grey and assorter groupies behind the velvet rope.

Best part of the story: Jim Gray has a bucket of beers sitting on the table in front of him. My buddy sneaks one, drinks it, goes back for a second. Jim Gray, literally smacks him on the wrist, wags his finger in my buddy's face and says "You get away with that once." And then leaves the bar with to 19-year old strippers-in-training.

I'm impressed they concentrated on the beer rather than berating Jim Gray for being a sucky announcer.

(1) Showing he didn't understand the English language, he told Mateen Cleaves that his teammates "were literally feeding off you during this game!"

(2) Showing he didn't understand empathy, confronted an Olympian who'd just won a hard-fought silver medal and asked how crushing it was not to win the gold.

Maybe Beck's trying to bring them down from the inside? That's what I'm hoping...