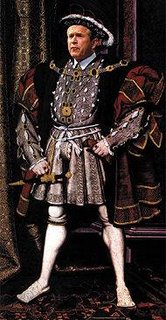 The latest news in the warrantless wiretapping is in, and it's absofuckinglutely pathetic:

Support was building among Republicans and the White House on Tuesday for a proposal from several moderate senators that would give President Bush's controversial surveillance program the force of law, more than four years after he secretly initiated the program.

In other words, after it became clear that the president -- by his own admission -- had broken the law and violated American civil liberties in the most serious way, that he had knowingly lied about it on the campaign trail, and that he boasted that he was right to break the law and would continue to break the law anytime he damn well saw fit, the Republicans in Congress have responded not by staging a full investigation or initiating impeachment procedures, but by rewriting the law so that what Bush wants to do is now legal. Unbelievable.

The Republican Congress is like an ass-kissing, mid-level management type at a major corporation. They volunteer to work as the umpire at the company softball game, because they hope the boss will notice them. And sure enough, when the boss steps up to the plate, he can do no wrong. No matter what he does -- bludgeon the catcher with the bat, swing and miss a dozen times, or simply stand there and soil his pants -- that will not only be allowed, rulebook be damned, but will be rewarded with a dozen runs. Two dozen if the catcher dies.

But back to our story:

Committee Chairman Pat Roberts, R-Kan., said the legislation proposed by several moderate Republicans was "certainly a good foundation to start with" — a sentiment shared by the Senate's Republican leadership and the White House, he said.

So not only is this a cave in by the moderate Republicans, but what we're likely to end up with here is going to be even more watered down. The idea of Pat Roberts acting like some sort of independent check on the administration is surreal. If Roberts were any more of a kiss-ass to this president, he'd have to have his lips surgically attached to the president's oval orifice itself.

The piece tries to present the moderate Republicans as rebelling in some way:

CBS News has learned that the Republicans argued their case all the way up the chain of command, including the vice president's office. CBS News correspondent Gloria Borger reports some Republican senators threatened to join Democrats in calling for a public investigation into the wiretap program if the White House didn't support congressional oversight.

After weeks of negotiations and closed door meetings, Sen. Mike DeWine, R-Ohio, said he would soon introduce the Terrorist Surveillance Act of 2006 with three other moderates who have helped shaped the debate on intelligence issues: Sens. Chuck Hagel of Nebraska, Olympia Snowe of Maine and Lindsey Graham of South Carolina.

I'm glad to know they took this to the top level of the administration -- the VP's office -- but the delusion that they somehow spoke truth to power and reasserted their rightful place as the overseers of executive action is complete and utter bullshit.

This isn't oversight. This is overlook.

They're overlooking the fact that the president broke the law, admitted he broke the law, and promised to break the law again. In response, without holding meaningful hearings, conducting their own investigations, or doing anything else contained in their job descriptions, they're simply going to rewrite the rules so that Bush can keep on doing what he's doing. They'll overlook what he's done in the past, and with this new toothless law, they'll be able to overlook what he does in the future.

They're also overlooking the Constitution. This isn't some arcane legal matter that scholars are hopelessly divided on. This is a goddamned law, passed by Congress back when it actually gave a damn about the kinds of things we pay only lip service to these days -- freedom, democracy, the rule of law, and so on. Legal scholars (with the exception of John Yoo, Dictatorial Enabler) are, in this matter, universally in agreement that the president broke the law.

What we're seeing here is the Harry Whittington Principle. The president shot the law in the face, and the Republicans in Congress are making sure that the law apologizes to the president for getting in his way.
Posted by Otto Man at Wednesday, March 08, 2006

Disgusting. What else can I say?

It's been about 12 hours and I'm still baby-kickin' mad!

This might be the one that sends me fully into the embrace of the Angry Left...

It's been about 12 hours and I'm still baby-kickin' mad!

I read about this crap this morning, and it was only twelve hours later that I could form words that didn't rhyme with "rock chucker."

What we're seeing here is the Harry Whittington Principle. The president shot the law in the face, and the Republicans in Congress are making sure that the law apologizes to the president for getting in his way.

This is it. This is the "new line." The Whittington Principle, and what that means. Classic.

So much for Congress distancing themselves from the Administration. I GOTTA wonder how Rove and Cheney had enough time to put this little coup together.

I'm plugging it at my place and at Cole's.

Thanks for the love, folks. I write best when I'm pissed off, and unfortunately I have plenty of material these days.

my take. (Link whoring only because I can't post a pic in the comments...)

But maybe, just maybe, Bush's Stay Out of Jail Free card has an expiration date.

If Democrats get control of either house of Congress in November, the heat's on like nothing he's ever experienced in his whole incredibly lucky life. The heat's going to be on and he's going to be toast.

Over this particular matter, I get the impression Sen. Jay Rockefeller alone — one of the coolest, calmest, most gentlemanly Senators I've ever seen — feels it's wrong, it's personal, and if it's war Bush & Co. wants, it's war they'll get. At least if Dems win the Senate and he become chairman of the committee.

SWA, you may be right about this coming back to bite W if the good guys get control of one house of congress. However, I haven't been terribly impressed by Rockefeller's performance on the Intel committee. I feel like maybe he could've played a larger role in trying to block or regulate some of W's royal ambitions.

Of course, I really have no idea what Rockefeller could have done differently. I'm just grousing.