With the month of March here, we've finally entered the lone sweet spot between the end of the NFL season and the start of the next NFL season -- a full frenzied month of college basketball tournaments. (Yeah, yeah, baseball freaks: I know your season runs for eleven months, starting now. Apparently, the league decided to compensate for the essential dullness of the game by making each team play 4,182 games a season. Wake me when the league championships start.) 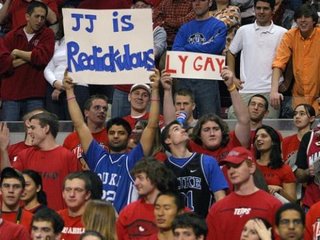 Anyway, the magic is already underway, with the conference tournaments unfolding right now and the action spread wide. ESPN2 has the always exciting ACC tournament running all weekend long, with Miami giving Duke a scare as we speak. Meanwhile, ESPN is using the spotlight of their Original Recipe Channel to highlight the games of the Big Ten. Apparently someone in programming went to Penn State, or thinks it's still football season. It's only a matter of time before the networks get involved. (Luckily for me, I've spent the winter developing a nice ass groove in the couch.)

So let's consider this a March Madness open thread. Who are you rooting for? Who do you think has a shot at going all the way? In what specific ways would you like to see Dick Vitale tortured? (Do I have a problem with parenthetical asides?)

Update: Since the comments have turned into a debate about whether Duke's coaching staff and players are really affiliated with the dark minions of Satan or whether they're simply operating as an independent force of unholy evil, I've changed the photo to reflect the new themes. Out of respect for the Dickie V fans, I decided not to reuse this classic image.
Posted by Otto Man at Friday, March 10, 2006

Yeah, I know Dickie V's annoying. But I've met him, and I have a ton of friends who work at ESPN and I know he really is a great guy. He IS that enthusiastic, sincere and happy. As nice a guy as there is in broadcasting. I suppose it might make you want to deck him if you had to travel with the guy, and it certainly sucks to hear him drag his Duke-love into every possible conversation...but torture? I'd just give the guy a bear hug, rub his bald head and invite over to my place to watch the tourney—with the stipulation that he has to hand me a hundred dollar bill every time he mentions anything to do with Duke.

He's a total clown, but, sorry everyone, I love the guy.

I think Vitale's a fine person, but his hyperactive energy and Coach K asskissing drive me crazy. So maybe not torture. An atomic wedgie?

A friend of mine's dad was on a two-hour flight next to Billy Packer. As people filed on the plane, they kept stopping and complimenting Packer. After a bit of this, as the plane's getting ready for take off, my friend's dad turns to Packer and says: "So, you're Billy Packet?" "Yes," Packer smiled, "yes I am." "Christ," he said back, "you suck as an announcer." And then he turned back to his newspaper and sat in silence for the next two hours.

I too love the Dickie V. He's great for drinking games... for example, when he did his first Gonzgaga game this year, it was a drink for every time he mentioned/compared Morrison to JJ Redick or Larry Bird. I think it was about 22 in a 40 minute game.

As for final 4 picks...UCONN, Texas, Michigan State and Villanova

Dickie V's a real prince, especially when you ask him a non-softball question like:

Q: Doesn't Coach K whine about officiating like a fucking army of fire engines? And what's up with his looking like a rat who got a mouthful of bad cheese?

Sorry I'm cranky, the Bizarro Longhorns are letting the absolutely talentless Red Raiders back in the game as I type.

Well, Duke just narrowly avoided their third straight loss. Miami nearly pulled it off, but it's not to be. On the bright side, we might see a Duke-UNC grudge match.

I'm really surprised Vitale can speak so clearly with his mouth buried in Coach K's crotch. He even compared J.J. Redick to Michael Jordan. Seriously.

And, yes, it's juvenile, but this still makes me laugh.

Screw all you haters. Seriously, being a Duke partisan, I think I have an insight into Bush's mentality. Afterall, their overall approval ratings are so similar.

This will be the first year I'll ever fill out an NCAA pool without picking Kentucky to win it all. I probably won't pick my employer, either, for two reasons. One: I hate their basketball team, being from just across the river in K-Y, and Two: I hate Oscar Robertson.

I saw him curse out a lady after a Bengals game because she'd accidentally bumped into him. It was terrible. People's jaws were dropping all over the place. And he also called my friend Matt a shrimp when he was 8 years old but, in all fairness, Matt still is a shrimp.

I saw Oscar Robertson drop-kick a poodle into a river. Advantage: The Big O!

Man, Travis, I've never heard about that side of the Big O. Sounds like a royal douchebag.

And Pooh, I hope it doesn't drive a wedge between us, but I may hate Duke even more than I hate Bush.

No, fuck him too.

No, fuck him too.

[BTW, You punks might have me on the last few seasons, but I'll take all comers on NCAA minutae through 2002 or so...]

I've been trying to figure out where iRod's been for this discussion, and just realized his Tennessee Vols are losing to South Carolina.

Damn, man, you just got your asses kicked by a bunch of goddamned gamecocks.

And Pooh, I hope it doesn't drive a wedge between us, but I may hate Duke even more than I hate Bush.

Vitale's not my grandfather or anything, guys, feel free to swing away...

I'm just sayin' every time I watch a game and he's making an ass of himself trying to cheerlead with Coach K's cock in his mouth, I have to shake my head and say, "yeah, but he's really a nice guy."

Though I have to admit that my faith has been severely tested by the revelation that A-Rod is a big Duke fan. Nobody listens to Pat Robertso...er Alex Rodriguez any way.

Dammit Otto, you've got to stop posting important posts so late in the day. I could have spent my whole work day yesterday talking NCAA!

Of course, it would have mostly been trash talking for my Wolfpack of NC State (I'm from Raleighwood, took a few classes at State), and they had their sorry butts handed to them by lowly Wake Forest in the first round of the ACC tourney. Woe is me.

I used to hate Duke during the Bobby Hurley-C. Laetner days, but since then I've liked them pretty good. I pretty much just pull for ACC teams, in the order of State, UNC, Duke, Wake Forest, Maryland, and then the rest (except for BC - no freakin' way BC should be in the ACC).

I really don't mind Dukey V either. Maybe he activates some of them eye-talian genes I've got in me, or maybe I just think he's Hans Moleman on LSD. I just plain likes him.

Year in, year out, Duke is one of the best teams in college basketball. Coach K is an awesome coach (though I agree with Norby about his face looking like a rat's), and he recruits the best players in the country. Every team they play gives them their best shot, and Duke usually beats 'em anyway.

All the stuff about refs favoring Duke is just sour grapes. I don't think announcers favor Duke because their Duke, but because they're on TV all the time and they always win. The announcers just give tons of mouth love to whoever wins a lot.

Sorry, Thrillhous. We'll start another thread on Thursday for the opening of the tourney, and you can waste the day away.

As a UNC grad I feel obligated to post this article from a Duke "hottie". That place is some kind of social experiment about what men will do given an entire university of marching band chicks.

You have to admire an article that begins with this:

"During my three years at Duke, I've come to realize that people outside of the university aren't too fond of us. They say we're stuck-up, we think we are better than everyone else, we're ugly and we're all from New Jersey."

And ends with this:

"There are plenty of women here who truly have it all: the looks, the brains, and the personality. Just consider yourself lucky when you meet one of us... and try not to be too intimidated."

Way to put that "stuck up" myth to rest, Felicity.

Dan, as a UNC alum, you'll appreciate this cheat sheet given to the Cameron Crazies for the last home game against UNC. You'll especially like the schadenfreude at the end.

A cheat sheet for the fans. Christ, is that school full of dorks.